Hello all,
The NXP Drone Team are hoping to make a low cost tailsitter VTOL to allow STEM and other experimentation using the RDDRONE-FMUK66 from NXP. We will be working with the team from Flitetest on this and will re-purpose some of their foamboard wing designs (see the images below).

We want to follow best practices, but do not have a lot of experience with VTOL. One of the goals is to also (hopefully) have it breakdown to “carry on luggage” size.

It was suggested it can be difficult to transition from Vertical to Horizontal flight using only ailerons? I don’t really think we can accommodate tilting rotors, but if it’s deemed necessary we will address this.

Q1) Would two stage ailerons work (I’m thinking of a mechanical linkage so the last 20% of deflection is amplified?)

Q2) Another option would be to put two sets of props on the leading wing (i.e like a quadcopter). this seems to have some advantages in terms of simplicity, and spreading the thrust requirements over more - smaller - motors and props. Apart from mechanics and damage if/when it tips over, Are there other known disadvantages?

Q3) I always seem to hear people talking about airspeed sensors in connection with VTOL - is this an advanced need, or are we going to need to think about including one from the beginning?

Q4) ANY other advice is welcome. This is new to us and we want to experiment. We hope this can be useful to the DroneCode community.

(Below is an example of the construction. This FliteTest material is surprisingly strong, and is easy to experiment with. We’ll use some of the same elements in our design. Of course power pods/props 2 (or maybe 4?) will be mounted in the front.) 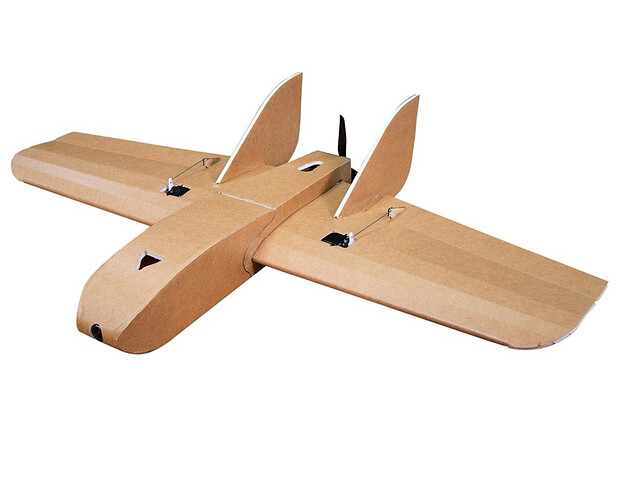 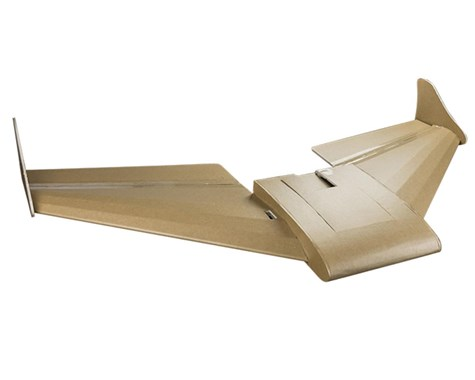 Hii,
I am working on quadrotor tailsitter vehicle as my final year project(ug). Have you considered quadrotor options without any control surface, it may improves the control both during hovering and cruise conditions.

Hi Niharranjan
I hadn’t considered not having control surfaces. That’s quite interesting. Is there some good research that points to specific efficiencies in this type of design? I do like the quadrotor idea as it allows for smaller motor and props. Are you aware of any specific deficiencies? I imagine it’s not too forgiving in the case of a bad landing… and you do have a larger “danger area” when it is near people.

You would still use vertical stabilizers for forward flight - correct? 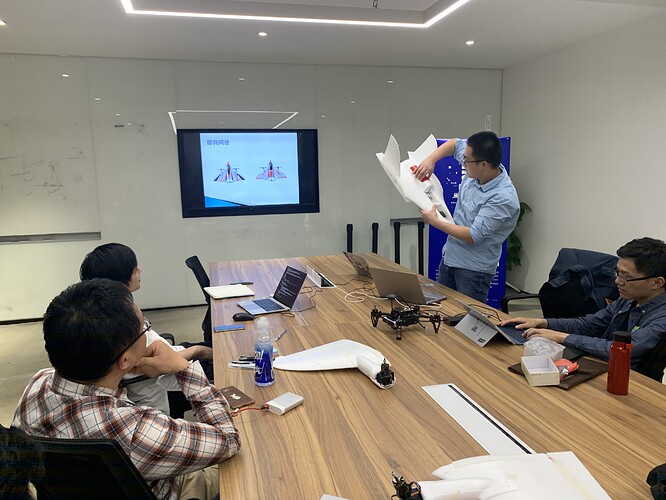 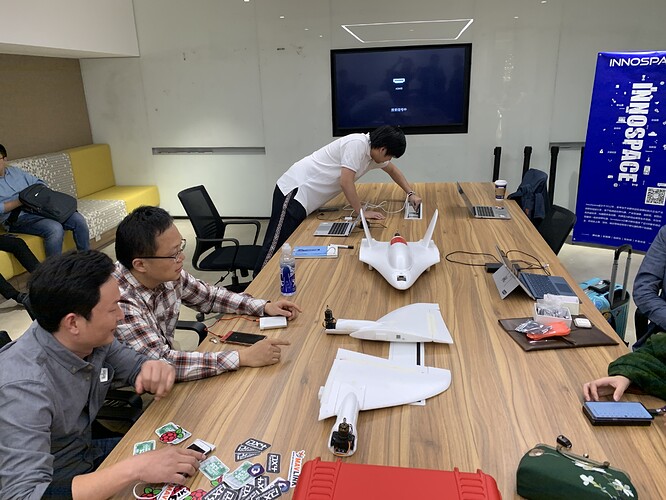 Cool project! About your questions:

Having 4 multicopter motors instead of only two improves hover control performance, but decreases fixed-wing efficiency (more drag, smaller/more props). But if you have 4 MC motors you could ofc start with cool stuff like @Niharranjan_Pradhan ! (though I find it quite brave to get rid of all control surfaces…)

Thanks @sfuhrer,
It was mentioned that elevons alone might not be able to “tip over” the airframe to horizontal flight. So i was imagining a mechanical method whereby the last ~10% of the deflection would have an additional second elevon, or extra deflection that would kick in.
But , it is encouraging that you beleive a large elevon is going to be enough. Clearly this is the easiest approach. We do have a option for tilting the motors/props as well. Yes they will be located on the leading edge of the wing. 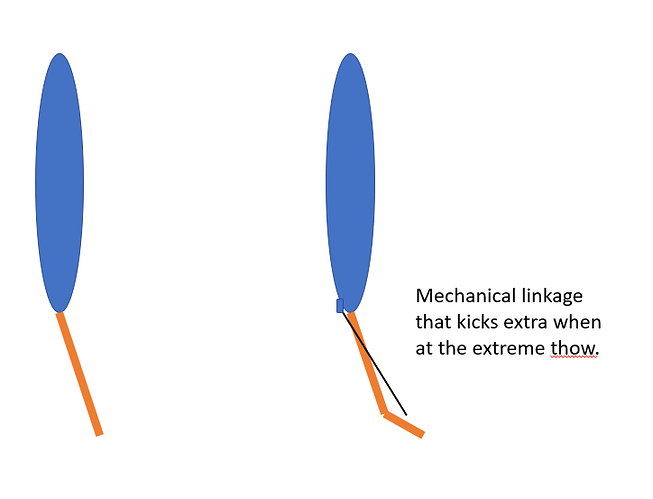 Looks nice!
And a good size.

@igalloway , for the quadrotor no-control surface UAV, there are lot of research papers available. The most challenging business will be the transition part, if one can handle transition perfectly then it is the best.

We’re making progress here. First prototype flies well manually. Will be making changes tomorrow to allow for delivery of medical supplies. Lots of space in the removable nose for additional cameras and sensors. 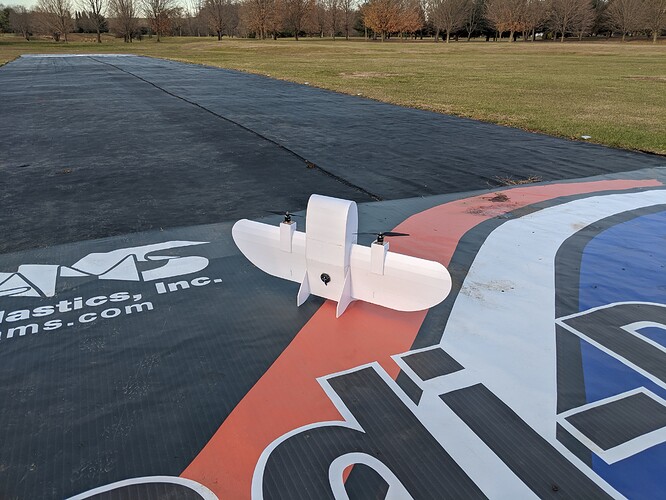 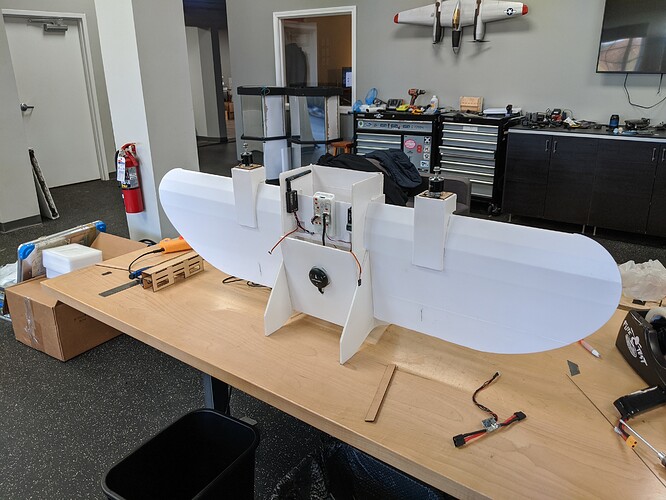 Here’s where we left off this week. Great frame that can knock down easily for transportation. Very inexpensive. We’re working on tuning, but looks promising. 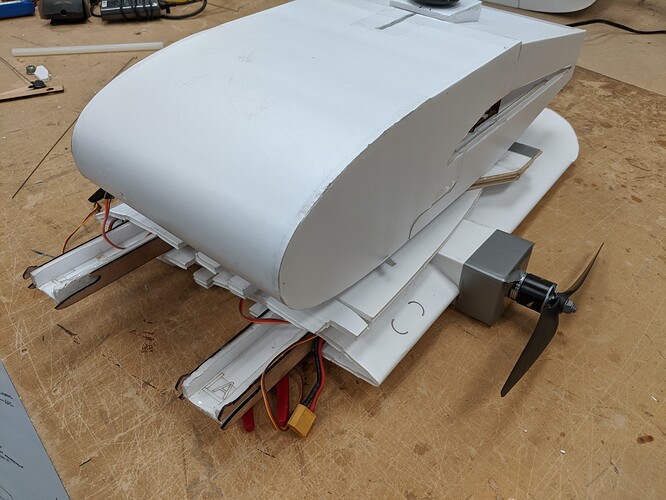 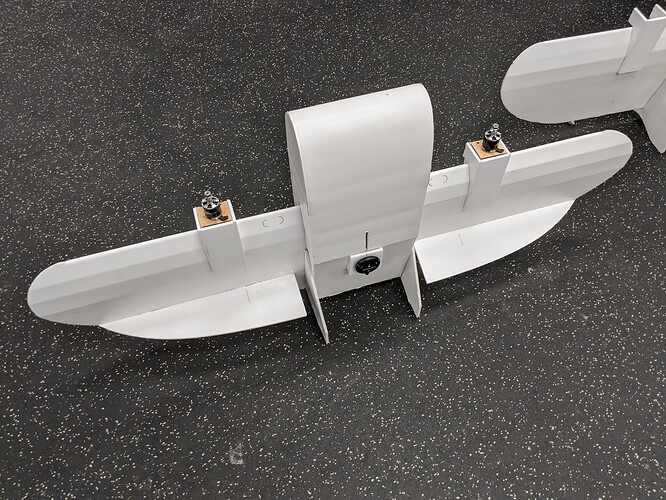 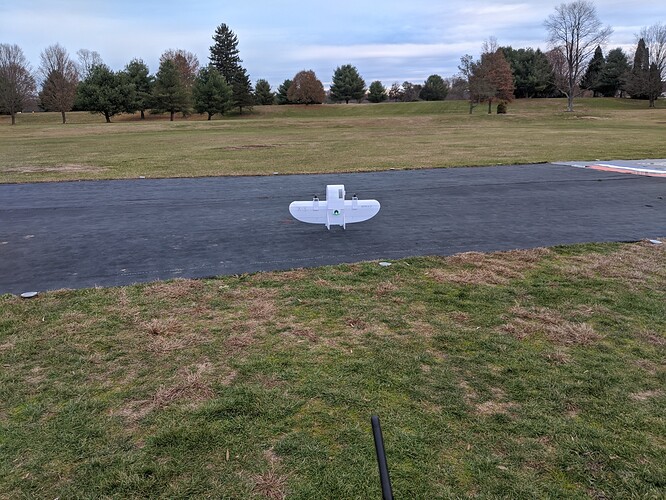 Nice! it would be great if you can share some videos of your flight tests.

We need some more videos, there will be some as part of this weekend’s thanksgiving FlitetTest. Still quite some tuning to do to get a good transition. Here’s one i have now of the stabilized Hover (in gusty conditions)

Looks very promising! I have one of your Hovergames quad kits and I’m quite happy with it, the flight controller works well. I wish you great progress, this could be my first VTOL

Hi, it looks nice.
What is the hardware for your flight controller?
You develop the controller by yourself also?
Thank you.

Hey, any updates on this project? It looks super cool. Flite Test just posted a video on their youtube channel but they haven’t posted anything on their tech channel.
Thanks!

@igalloway Have the designs been released anywhere?

Sorry - I’ve just noticed we’ve been delinquent on followup here!
The VTOL is using our NXP RDDRONE-FMUK66
WE haven’t had a lot of time to refine this further. The intent was to produce an inexpensive ariframe so others could further develop.
Flitetest is doing a build video and preparing plans. It will be for sale on their STEM website.
I will get an update on where they are with this.

It’s available for preorder at https://store.ftstem.com/ft-shield-vtol-bundle/

From inexpensive stated in post #9, it becomes expensive …
What is the airfoil of your wing ? Any transition video ? 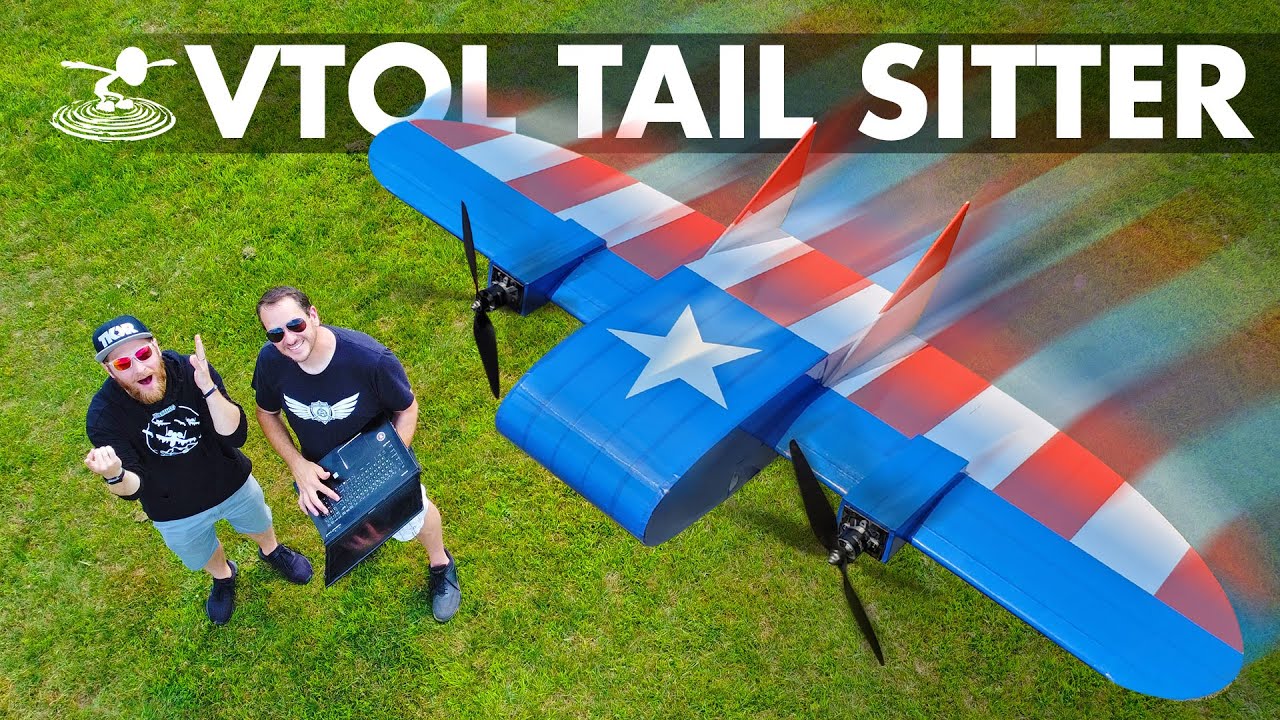