Greetings to all from a new poster.
My FX-61 VTOL variant uses two SS-2814-1100 contrarotating motors, and aerodynamic surfaces on a CF frame in the propwash. Not very clean- I call it the flying wash rack.

I’m using a Vector FC in series with a KK 2.1.5 running Open Aero VTOL. Great software. Hovers well, but the weather here in Central France is terrible right now, and thus ended test flights, so transition is still a big question mark. I want to do my own transition- to PX4, since it and the pixhawk make a far more versatile combination, and the fc-fc series system has too many failure points to be reliable, I think. I like the in-line coaxial power system because I can (someday) shut off the front motor with it’s folding prop and run on the rear motor for cruise, at better efficiency. Also, in hover the front prop unloads the rear prop allowing me to use a lot more pitch on the rear, which produces about 25% more hover lift, and should cruise really well.
I have a second prototype ready for the controller (pixhawk this time, I hope) to be installed. This one has articulating motors. The front motor moves left-right to control yaw (roll in hover) and the rear motor moves to control pitch.
I’m a total newbie here, so I ask sincerely for patience when I ask a question that is dumb or is old hat.
Thanks in advance for your help.

For the first airframe you described I believe the existing “Caipiroshka Duo Tailsitter” (see airframe configuration in QGroundControl) would be a good place to start. Can you describe the motor and servo mixing to successfully hover? It might need a new builtin multirotor mixer.
We’ll have to think of someway to handle the two motors differently as you described. http://dev.px4.io/airframes-vtol-caipiroshka.html

The second prototype with articulating motors will require creating a mixer (extending an existing tailsitter) which is just a text file you’ll place on the sdcard. https://github.com/PX4/Firmware/blob/master/ROMFS/px4fmu_common/mixers/caipirinha_vtol.main.mix
http://dev.px4.io/concept-mixing.html

Dagar, thanks very much for your inquiry. You guys here are pretty intimidating, but the OpenAero VTOL is a fairly steep learning curve, so I figured if I could still do that one, I’d move up higher in the food chain-- to the top, in fact-- and see if I can wrap my head around the PX4 software.
To oversimplify, Happy Sunday’s software sets up eight identical channels in the KK2.1.5 board that begin with pilot input and allow the mixing of any data source in any amount- accelerometers, gyros, The results can be assigned to any of the eight PWM outputs as motors or servos. Once you get it, it’s really versatile. In my iteration of this system, I
1)-start with Rx output to the board (can be PWM or PPM), and mix filtered gyro and accelerometer sensor data to the elevators and, ailerons channels to get elevon mixing. Polarity is found by observing the control movement and adjusting accordingly. Autolevel is available, and I use it.
2) I assign throttle input to two motor channels, with vertical axis accelerometer data tweaked in some mysterious PID way to achieve fairly good vertical stability.
Transitions are pretty neat- you set up one batch of input-outfut channels for P1 (hover) and another for P2 (level flight), and blend them from all P1 to all P2 with any combination in between you like. For, for example,P1.3 for slow forward flight. I could say my hover setup is all scaled 50 and all scaled -50 for hover, but it’s meaningless till you work with it.
Honestly, Happy Sunday has a great idea. If the board were more capable I’d still be using the system—I’ve paid my dues in fried neurons- But alas. And the PX4/pixhawk looks like light years ahead, in hardware capability anyway.

As for my prototypes, I am writing this on a connection so slow that a page load can be ten minutes, if it’s a picture, and mostly the server boots me before the picture ever gets uploaded. A 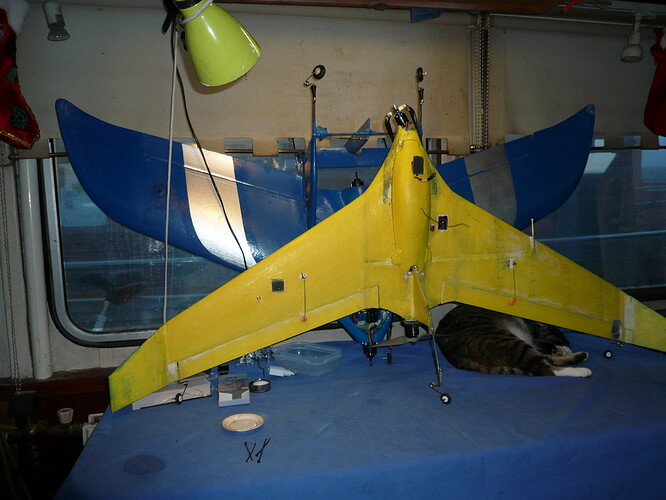 P1100577.JPG2560×1920 2.72 MB
ccidentally cut phone line, so my usually very good broadband is stone dead.
I’ve cut off the laundry rack, and am building two more larger single-axis articulating motor mounts for the first bird. Just too ugly, too draggy with all that junk hanging out in the breeze. I just sent the ply off to the laser cutter today. But the second, smaller bird is ready, and so am I.
Will try to upload a picture again.
Hooray! It worked. The blue one in back is going to be retrofitted with articulating motor mounts- yaw in front and pitch in rear.
Sorry for the long post, but Happy Sunday’s software deserves a decent shot at description–it’s good.
wazoo January 10, 2017, 7:53am #4

OK, I finally have Qground control up and running. Took 5+ hours to download. If you can point me toward the manual, I’d be grateful.

The second prototype with articulating motors will require creating a mixer (extending an existing tailsitter) which is just a text file you’ll place on the sdcard. https://github.com/PX4/Firmware/blob/master/ROMFS/px4fmu_common/mixers/caipirinha_vtol.main.mixhttp://dev.px4.io/concept-mixing.html

I see. Of course the code is martian to me, but the idea is clear.
Yes, the articulating motors are different, and should be fun, and very powerful. Using a pilot/airframe reference mode,need a mixer that will allow input from all basic flight controls- pitch, two servos, yaw, again two servos, but roll (in hover mode) is a rather strange idea. it will work if the system has good z-axis stabilization. I need to mix the elevon roll control inputs with the motors so a stick or stabilization roll input will control the elevons as usual but the motors also.One motor will speed up slightly, and the other will slow a bit. We will l be using torque differential for roll control in hover There’s a good deal of airflow over the elevons in hover from the front motor, so they will help.
The idea works- I found that out on the FX-61 variant (blue bird). A change in the prop size of one engine produced a roll component that I had to trim out, but that was enough to produce sufficient roll, I think. The power changes will need to be small, but the elevons are not large enough or properly placed to do the job alone.
I really like the in-line motors, because one can shut off the front motor and run far more efficiently on the rear for cruise.