Hello all,
also @Ben_Parrish
I have been trying to build my own VTOL air plane.
My first attempt was rather experimental type using EDF however was not so successful due to low efficiency of EDF itself.

Hello everyone, I decided to build a VTOL with EDFs on flying wing with tricopter style as described below image [image] I actually almost finished building as below [image] I setup as default Tricopter + setup and successfully flew in vertical mode. Now I need to figure out how to make transition from vertical to flying mode. I tried to search for any selectable option in the default setup but could not find anything yet. Maybe I have to write my own script file for this? Any idea…

So I decided to go with more conventional type aircraft like Convergence VTOL from horizon hobby but don’t want to just make the same plane again and finally choose mini skywalker from hobbyking. 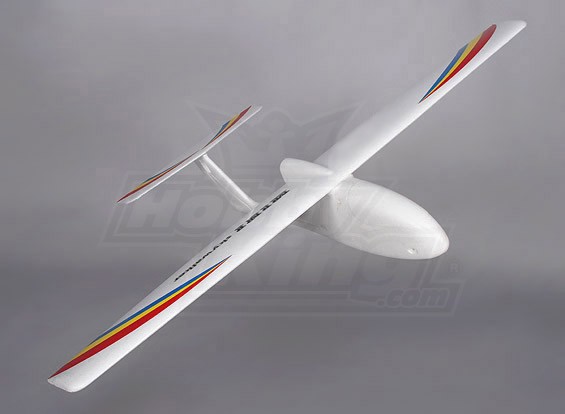 ##Configurations
The setup is pretty much the same as VTOL Convergence kit except this plane has full AER(Aileron, Elevator, Rudder) control as below image. 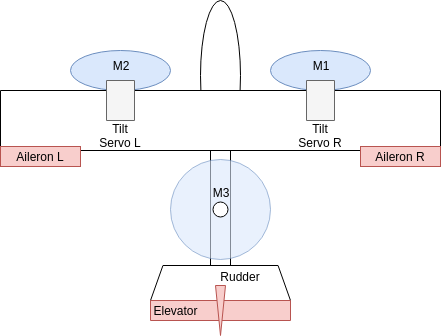 I used 1806/2300kv BLDC motor mostly used for FPV racing drones. They are very light yet produce enough thrust to lift all the weight with all 3 motors.
The hard part of course is making the 90 degree tilting mechanism.
Since the front 2 propellers have to move individually to control the yaw, I had to put a servo to each wing.
I borrowed a collective pitch control arm from old T-REX 450 helicopter and connected between the motor mount and servo horn.
This setup helps reduce possibility of servo damage due to vibration from the motor and props.
I used Corona CS238MG Metal Gear Servo 4.6kg / 0.14sec / 22g servo for this setup.
I will share the 3d print ready stl files of the design later. 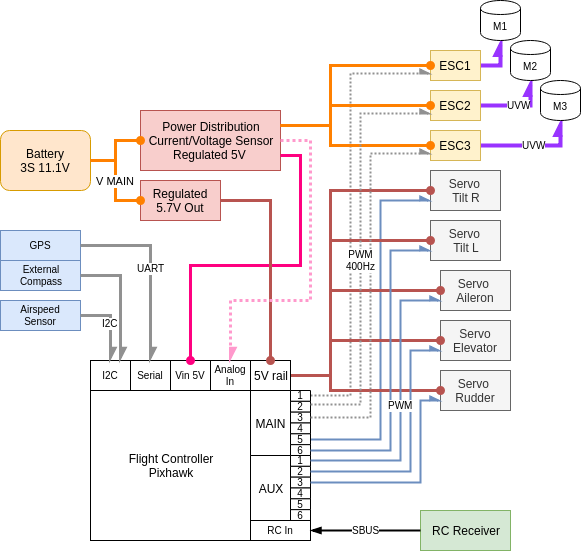 All the equipments including the main FC, power distribution, servos, ESCs are connected as below diagram.
MAIN 1-3 connected to rotors Front Right, Front Left, Rear
MAIN 5-6 connected to tilt servos and they are all analog mini 19g servo.
AUX 1-3 connected to wing surface as Aileron

Compare to Convergence VTOL setup described in the tutorials in https://docs.px4.io/en/frames_vtol/v...pixfalcon.html above setup requires separate control for aileron, elevator, rudder.
So I added another vehicle setup under /ROMFS/px4fmu_common/init.d and mixer script file under /ROMFS/px4fmu_common/mixers
All the scripts and necessary files are included in my git https://github.com/kyuhyong/Firmware.git with branch “vtol_skywalker”
To choose the vehicle named “vtol mini skywalker” you may need to flash the .px4 file from QGroundcontrol software.

VTOL requires so many things together and often becomes messy with all the wires and connectors so I was worried if the kit is too small for assembly.
Fortunately this kit has enough room for housing all the stuffs needed as below picture. 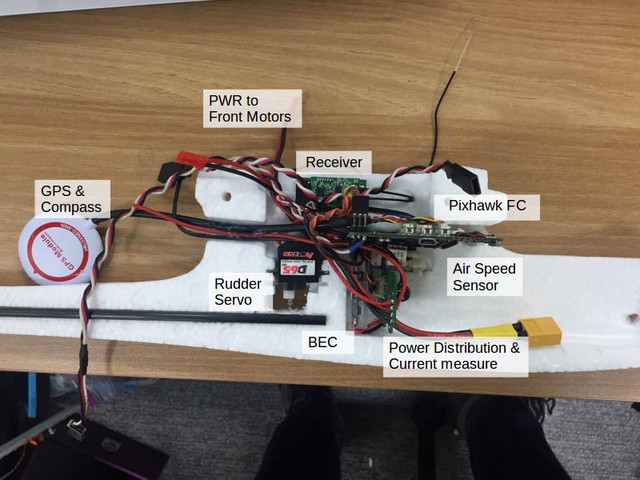 Hovering test was done in last December but the freezing cold weather in Korea prevented me from doing actual flight test until I finally made the first and successful flight on Feb 6.
Below video is all about it. Sorry about poor video editing and camera. I was holding the gopro camera on my head.

##Review of the flight

Transition from vertical take off to fwd flight was very gentle and no significant loss of altitude however reverse requires some skills as the plane may turn in place after stopping from fwd motion if the throttle input is too low.
So I have to care not to lower the throttle too much while descending to land.
Flying was very stable with a little help from stabilized mode.
Finally I can fly a fixed wing aircraft that can take off and land on a tiny little spot!

Thanks for reading my post and if you have any questions please leave a message below. I will try my best to explain.

Awesome project! I like how integrated it looks in the inside of the vehicle

Yet another successful flight in a slightly windy day.
I put the camera where canopy usually sits and this made the plane a little nose heavy and hard to climb.
But it flies quite well thanks to a little help from the auto pilot.

Next time I should put it in the upper wing and see how it improves overall performance.

Also you can find the log of the above flight here as well.

Hi, I have a similar setup, except I am using a Convergence air frame. I have everything working except I can not get the controller to operate the 3 motors.The controller operates the 4 servos perfectly. I have verified all the motors work by connecting directly to the receiver PWM ch1 Throttle channel. In my setup I am using: Pixfalcon (similar to Pixhawk), Qgroundcontrol, Taranis X9D Tx, FrSky X8R Rx.

Do you have any idea what could be wrong? It seems to be a software issue since I got the controller with the same hardware setup to operate the 3 motors using Arduplane/Mission planner. I prefer to work with Qgroundcontrol so I would like to solve the problem.

Can you share the connection you made? Any pics?

Hi, It is the same setup as you showed in you Electrical diagram. I found the solution to the problem. I just needed to move the transmitter stick to the bottom right for a few seconds to get the motors to start. This was no obvious to me since this is my first drone. I typically fly fixed wing RC planes.

By the way I am having difficulty getting my Holybro Telemetry radio to work. It seems to be a driver problem. I have tried different PC’s: Win 10, Win 7, Samsung tablet with Android. The Windows PC’s never connect to the Telemetry unit. But the Samsung tablet connects once in a while. When it does, it connects to the telemetry unit in the Convergence and I can see my Pixhawk config data in Qgroundcontrol.

Do you know how to get the Telemetry unit to work reliably?

if you mean a usb serial radio similar to the 3DR SIK radios, I had to reprogram the firmware on both the local and remote radio to get them to connect reliably. It’s been a while but I think I used Mission Planner for that, or maybe qgroundcontrol. I know APM2 failed every attempt to do anything with an SIK radio. My onboard unit did not have a USB port, so I had to solder in a usb to uart FTDI cable , and once also had to add a jumper wire to force the radio into bootloader mode. Hopefully you can program both radios units with the same firmware and settings and you won’t have issues. If you do I’ll look up the links to the information I used for mine.

another quick thouight is to try a USB 2.0 port if your win10 laptop has one. I also always had to plug in the laptop unit first, then power the onboard unit. If they didn’t connect in 30 secs, restart the drone . full poweroff.
I have no idea why telemetry radios can be so flaky, but they can be. I just hope the holybro version has usb ports on both units.

Any details on maximum flight times with this setup? Have you tried an extra large battery? Do you think it could handle a gopro also?