I actually almost finished building as below 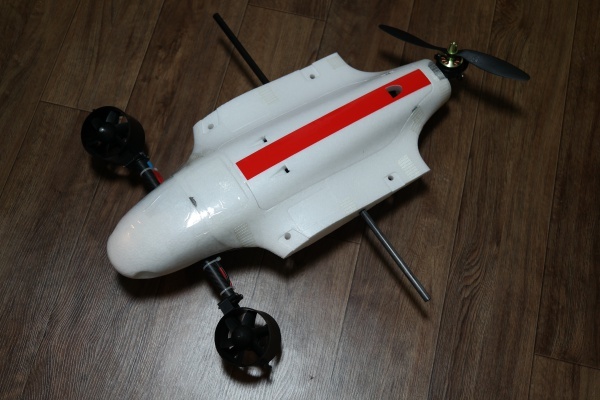 I setup as default Tricopter + setup and successfully flew in vertical mode.

Now I need to figure out how to make transition from vertical to flying mode.
I tried to search for any selectable option in the default setup but could not find anything yet.
Maybe I have to write my own script file for this? Any idea and suggestions would be much appreciated.

Check out the convergence configuration, it should work with your design with little changes.
https://docs.px4.io/en/frames_vtol/vtol_tiltrotor_eflite_convergence_pixfalcon.html

OK so I wrote my own script file as follows.

In init.d folder, I added a file named “13014_vtol_tricopter” which includes following lines of code.

and in mixer folder. I added a file named “vtol_tricopter.aux.mix” which includes following lines of code.

How do you think about this code?

Quickly looks good, however I believe the convergence uses the 1-4 for the tilt servo.

Yes I checked Convergence uses servos in main from 5 to 8.
One of the reason I believe is that its tilt servos response much faster than that of my setup. The font tilt servo in my setup only being used while transitioning between vertical and forward flight mode.

I flashed using QGC and successfully load the newly added airframe however servo on AUX channels are not working. No signal on the pin.
I did supply 5V power on the AUX power rail and checked other airframe using similar AUX channel works fine.

Am I missing something here?

ADDED
I accidentally placed a space between .aux .mix and that is why it cannot load the file correctly.

Great! keep us updated on your progress!

Now I am trying to figure out how to match the pwm output to servo motor.
When I triggered transition, tilt servo does not seems to move its maximum position vs directly controlled by receiver.
Below image shows the two outputs. CH1 is from AUX, CH2 is from the receiver. 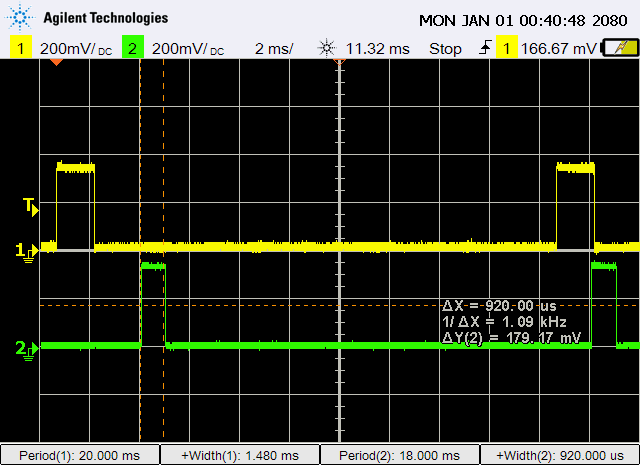 When all the way down, AUX only reach about 1.48ms while the receiver generating 1ms duty pwm signal.
I did increased the Tilt servo mixer in my mixer file to 15000 but nothing change much.
Tilt Servo

Is there anything I can do to solve this issue?

It think the problem is in the scaling and offset value of your mixer. The parameter “VT_TILT_FW”, “VT_TILT_MC” dictate the tilt control output value in each mode. Since in your case it’s 0 and 1 the trick is to setup your mixer using the positive scale and a offset.

Yes you’re right and figured it out myself too.
I changed the mixer as follows and now I can get the right pulse 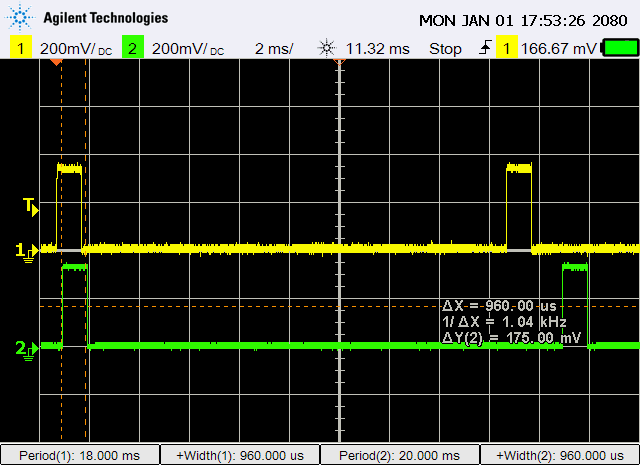 Thanks for your comments.
Now I can fly the thing!

Hello,
I am going to start a project similar to yours. I am very new to Pixhawk and Ardupilot.
I was looking at the Convergence model, but I want to use a tilting rear motor.
How would I go about using your airframe type?
Will you add it to model choices?
Thank you.

Did anyone gave help on tilting rear motor?

What is advantage of tilting the tail rotor rather than having two servos at the front as the convergence?

Hi, thanks for your comment. I still haven’t really finish the project yet tho.
Regarding your question, compare to convergence, the overall size is bigger and would require big tilting mechanism. So I decided to tilt rear motor rather than having two tilting for front thrust motors.

Can you clarify how you fixed the AUX channels not working issue? I am using Tricopter frame and I setup my Pixhawk mini using QGC.

What plane did you use?

Hi @Kyuhyong_You great work. I am trying to fly a custom TriCopter as well. But I have an issue where the TriCopter rolls to one direction (left usually) upon attempting to take-off. I used the standard config and mixer (TriCopter y-) then added two summing mixers so as to tilt all three rotors rather than the tail only. Any ideas would help. Thank you