PixRacer 250 Tuning Out the Wobble

Just getting started so, I pulled the trigger and purchased two PixRacer flight controllers and swapped one out for a 250 quad I was flying and the other with new parts of the same build. For both builds I have been experiencing wobbles or oscillations thus making it tough to get beyond hover (see video at https://www.dropbox.com/s/hokzu7agv05g66y/PixRacer%20Tunning.mp4?dl=0 ). I have been racking my brain on how resolve. As for the Tuning Tab in QGround Control, I’ve only adjusted the slider tabs for the roll, pitch, and altitude sensitivity, but to no avail.

Any thoughts? Apologies if this has been covered already but I did not come across any links.

Below is what I am using for the configuration of my setup:

I also used great information from the below references:

It would help if you posted a log. From the video I’d guess that your rate P gains are a little high, but it makes no sense that the QGC sensitivity sliders had no effect.

I appreciate the input…a little delayed response because I had a minor set back with a crash and damaged the FC and spent two days looking for the lost SD card. So of the original builds (QAV 250 air frame configuration) I attached the log file
with the wobble flight from the second platform.

As a side note, for the FC I am having issues, I often have to reload the firmware and recycled QGround Control multiple times to get through the sensor compass calibration step because the orientation images are not being consistently displayed.

Interesting data point. I have since replaced the damage flight controller and the new one works just fine right out the box. I ended up with a 3DR DIY version 0.0.1 air frame configuration loaded, in this case the QGC sensitivity sliders work – screen shot attached 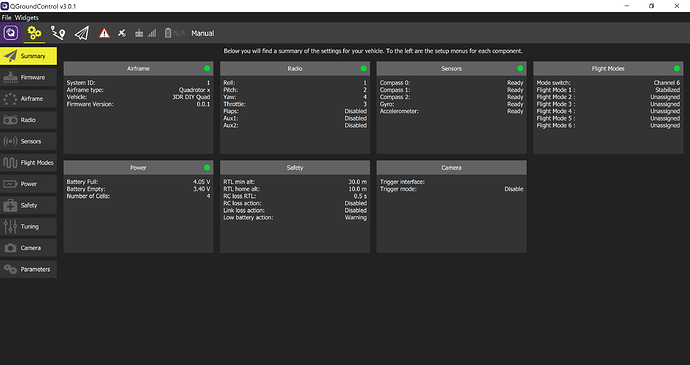 That log shows that the roll and pitch setpoints aren’t being tracked at all, even though the rate P gains are fairly high. Was this the broken flight controller?

Well, that explains the flight behavior. Unfortunately, this was not the broken flight controller. I may have a bad unit and will have to order a new one because it sounds like that this is something that cannot be tuned out.