I recently bought a Holybro Pixhawk 6c and have been trying to get it up and running again.

This Sunday 9 Oct. I performed two quick flight tests after getting new props (APC 10x5, balanced) and a new battery. My prev. test flight was 5 Oct with a similar battery, and Graupner 10x5’s. It was a quick up-and-down test that day, but performance was good.

On Sunday however, weird things happened.

Take-off was good and stable for a few seconds, but shortly after takeoff the thrust started oscilating without my input. The thrust would oscilate up and down and the aircraft would jump around (maybe 2-4ft each oscillation of power), with a frequency of maybe .5-1hz. This was in position mode. About 40s into the flight, the aircraft randomly started rotating along the yaw axis, and then I brought it to a landing (smoothly).

After an OK but sub-optimal first flight, I did a power cycle, and tried again. Take-off was very jumpy (trying this time in stabilized mode), and quickly noticed rocking from side-to-side (seemingly along the roll axis) that was worsened with throttle. Control was hard to maintain with all the side-to-side and up-and-down oscilations. Seeing performance was really really poor, I tried to bring it in to a soft landing but the throttle was too tricky to get a grip on, and the aircraft slammed into the ground about 17 seconds into the flight, ejecting the battery. Because of this rude ending to the flight, I’m unsure if the log file captures the ending accurately

Any help understanding what may be wrong, and how to tune my hexa for better performance would be greatly appreciated!!

If it helps, here’s an idea of the hardware I’m running with. 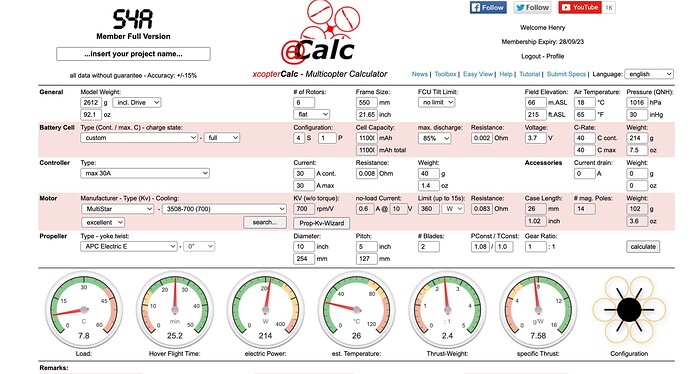 This is my first log analysis post – please advise if I can do anything better in terms of process or format. It is too late now, but I see that my test flights were not done in accordance with the pinned post, but actually fairly similar in terms of my calibration and bench tests prior to flying.

Also there are videos of both test flights, along with the logs

Why was the thrust control moving like this? I certainly wasn’t manually moving the throttle like this

I’m not an expert but your vibration metrics seem way too high. And also your mag may be too close to the motors/ESCs

That said, I don’t know what you should do to fix it, if that is actually the problem.
You may want to see this MC Filter Tuning & Control Latency | PX4 User Guide

Thanks for the reply @Benja

I see what you mean. Any idea why that may be? My controller is quiet well insulated against vibration.

It’s on a 4-point rubber suspended platform, with a vibration isolation rubber pad beneath it.

Could this be config/calibration or would it likely be actual vibrations from imbalanced props/motors?

I don’t think the vibration you see in the logs is coming from the controller vibration. I think the main cause for this is the rapid oscillation of the motors, which is really crazy how much they oscillate.

The oscillation you see in the thrust comes from the motors hitting first lower saturation and then upper saturation and back to lower and so on. So you need to figure out why this happens. Had a kinda similar problem when I had a badly tuned controller. But your motors are oscillating even more than what I have seen before. They keep going from top to bottom saturation. I would suggest first checking that all motors spin in the direction specified in the airframe and secondly try to reduce the rate controller for roll and pitch and see if that helps.

Thanks for the reply @Mr_Madsen

Interesting – and when you say oscillation of the motors you mean variance in throttle (i.e. the “pulsing” up and down of thrust)?

All spin directions and prop rotations are correct. To the best of my ability to determine, all the motors are functioning normally EXCEPT for motor #5 – in test mode through qGroundControl, there is noticably higher noise and frame “jolt” on motor spin up for #5 compared to the other engines. Could this be the source of the issue? I can’t tell why that motor is louder/“clunkier” on spin-up, maybe its imbalanced or something. But it seems odd that flight performance degraded so heavily during this test day in the OP compared to my previous flight (only change being a 10% larger batter, and APC props instead of Graupner, although the props had the same length and pitch).

You mention reducing the rate controller for roll and pitch – where would I do that/to what level might you suggest editing it?

Sry for the slow reply, had a small vacation.

Yes when I say oscillation I mean the variance in throttle which happens.

Hmm motor #5 might make the problem worse, but it shouldn’t result in what you see. And the reason I guess why you might have seen a difference compared to flight the previous day could be, that when you had your good flight there was less wind. If the drone is badly tuned a wind gust might get it to start oscillating more and more until it crashes.

I would suggest following this to tune it. Put a really low P and D value as a start. This should enable you to fly it, but with pretty slow reactions to commands (make sure to test without too much wind, when using low P values for the rate controller) and then slowly increase them until you see your desired response. (Nice following for pitch and roll angle in log file)