A problem about delta VTOL transition without a air speed sensor?

A problem about VTOL transition without a air speed sensor?

I have built a delta wing ,as following Fig. 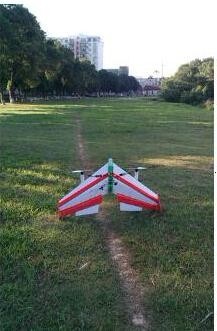 I have set the parameters according to this two page 1)VTOL’S WITHOUT AIRSPEED SENSOR.2)TBS Caipiroshka.I have conducted indoor test and outdoor test.Now the plane can hover well .But MC-FW transition is failed !!
#The problem is:
when I Toggle transition RC switch which channel is assigned to AUX1,but the ailerons don’t response to the RC yaw and pitch input ,and then the plane is not under control.How to solve this problem？

Assign the channel you’re using in RC_MAP_TRANS_SW parameter. Do not use AUX 1 in RC tab.

Ask about the use of RC_MAP_TRANS_SW has been set up, vertical take-off and landing is also no problem, but after switching the wing aileron and throttle and all are not work what is the reason? In addition, I did not use my airspeed meter, also by no airspeed meter set

What is your QuadChute setting? Are you climbing above that before switching to FW? You can test on the ground by setting QuadChute to 0 (zero), power up, press Safety Switch, switch to FW and test ailerons.

Don’t unlock on the ground can see aileron servo switching to normal, no problem, but after unlocking switch steering and throttle completely doesn’t work.

It’s beyond me at this point. I think maybe it’s time for you to present your issue at https://gitter.im/PX4/PX4Devguide .

By the way, when you test on the ground (without motors running) and switch to FW, are you putting the aircraft on horizontal / flight level position and test the ailerons? You should be at least in Stabilize Mode to do this.

Do not use switch all channels to unlock, no problem, ailerons, lifting the normal operation, after unlocking motor running after switching after all channels have no reaction, this very strange, yesterday flight after takeoff, vertical handoff is still relatively stable, has been flying forward, all channels did not respond

Yes,I put the aircraft on horizontal / flight level position and test the ailerons.I do this in Stabilize Mode .

It’s beyond my knowledge now. I definitely recommend you post your issue at https://gitter.im/PX4/PX4Devguide . Good luck with your project.

Thank you very much!

How about the VT_FW_QC_P and VT_FW_QC_R? Should they be set to zero also?

During initial flight tests, I usually keep them at 0 and just being vigilant with the transition witch and controls.

Then all these three parameters are set to zeros as the same as their default values. Thanks rollys!

@bigbellmercy Once you’re ready for missions/autonomous flights, then set them. They serve as your safety fall back.

Because Stabilize mode doesn’t rely on GPS and doesn’t care whether “it knows” that it’s flying or not. It’s like in Manual mode but will always level it off if all control sticks are neutral.

I test my Quad VTOL on a desk with propeller removed.
At position mode the pull motor won’t rotate when I switch to FW mode.
I start at position because it is hard to control a multirotor at stabilize mode.

Will it be the same if I install propellers and rise to 30 meters at MC position mode, and then switch to FW position mode?
The push motor will still remain still?

But does it work in Stabilize or Altitude Mode? Quite honestly, I’ve never bench tested in Position mode and in actual flying, I take off in Stabilize, switch to Altitude then switch to FW mode. I like being on the sticks during takeoff and landing phases. I only use Position Hold during FW so it tracks to a point to follow as straight a line as possible.