Hello everyone,
I’m new to Px4 and QGround Control and I am struggling with one issue. I’m flying on a gazebo engine VTOL simulation with QGround Control but sometimes it has weird behavior.
When I fly a classic survey pattern sometimes it takes the turnarounds “from the opposite side” (see picture). Some turnarounds are done well but some not (on this picture the bottom left). What causes this?
I know it has to do with L1 distance computed from FW_L1_PERIOD, FW_L1_DAMPING and current airspeed. It is also affected a little by the rotation of the survey pattern. I was messing around with these parameters but even with the same settings it sometimes did the job right and sometimes not.
Does anyone know where the problem is hidden? 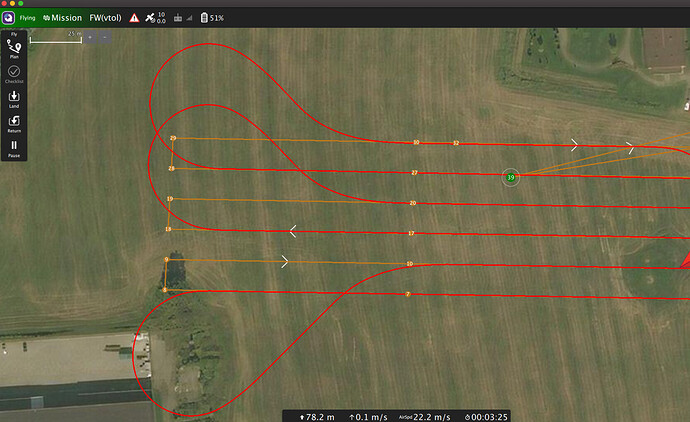 Maybe it could be caused by little roll oscillations, couldn’t it? When the plane in the picture accepted points 8 and 9 (in the bottom left corner) it probably had a little negative roll and because of that, it decided to take the turn for point 10 to the left instead of to the right?
Could this be the reason for that?