My tiltroter Quad x VTOL is hovering just fine, but it’s constantly yawing clockwise. Somehow steering / yawing left or right doesn’t seem to have an effect. Do you have any idea or tip, why it’s rotating? I double checked the level/compass calibration and should be fine.
Parameter VT_MOT_COUNT is set to 4.
I’ve uploaded the log file to LogMuncher and waiting for the link, will attach it as soon as I receive it.

Is there an issue with LogMuncher? I always receive an error 500 and still haven’t received a link since yesterday to my mailbox.
here would be the link with the 500 error : http://logs.uaventure.com/view/PvxmX66NHsUcwd7B3zpCRg

Can you try uploading your log again? It was not running at some point over the weekend.

The file format is px4log.
logs.x4.io throws me this one: “HTTP Error 400: Invalid File. This seems to be a px4log file. Upload it to logs.uaventure.com.”

Halleluja I got one working: http://logs.uaventure.com/view/hxpbQzvqGPSZVpu6fxYFyF

I can do tomorrow a longer “turning” session for logging, if this isn’t sufficient.
Maybe to my airframe type, mainly I’ve just copy and pasted the claire’s VTOL frame and added a rudder. but it’s also the same issue without - the main mixer is standard “R: 4x 10000 10000 10000 0”, so I guess this can’t cause the problem.
hopefully somebody has an idea, I’d really like to get the tilt rotor VTOL in the air

So just to continue my monologue, i was able to do another test. I unplugged the external gps / compass and configured the vehicle as standard x-Quad. Still same behavior. I also saw after it “landed” and reduced throttle to idle, that the compass still was turning, but CCW. Then I gave more throttle and could observe that the compass again was turning slowly CW. Is this an indicate for ESC/ Power module being to close to Pixhawk?
Here is another log:
http://logs.uaventure.com/view/hxpbQzvqGPSZVpu6fxYFyF

The logs you uploaded only show it idling on the ground. Could you try to find one where you hover it?

Already during the IDLE phase the thrust / compass coupling is visible so yes that is probably your primary problem at the moment: http://logs.uaventure.com/view/hxpbQzvqGPSZVpu6fxYFyF#Thrust_PLOT

Try to get the external compass as far away from power lines as possible. Maybe post a picture of your setup.

It was hovering on a tether about 20cm from the ground. But yes, I can do another hover test and upload the log and also post a picture from my prototype setup, when I’m back on Sunday.

I can’t give you a correct distance because it also depends on how much power you put through your system. But it’s easy to find out in the log, best do a few tests with different GPS locations. When the external compass is connected it will not use the internal one (unless the external dies).

I finally got it to work! I extended the wires to the external compass, then the power line interference was gone, but it still yawed in the CW direction. I nearly went nuts, when I realized, that I didn’t pay attention to the angle of the motors, I’ve just put them on the four arms very quickly. Two of them were slightly tilted in CW’s direction and therefore the Pixhawk wasn’t able to correct such movement without losing its level position in the air.
Here is a photo of my “quick” prototype: 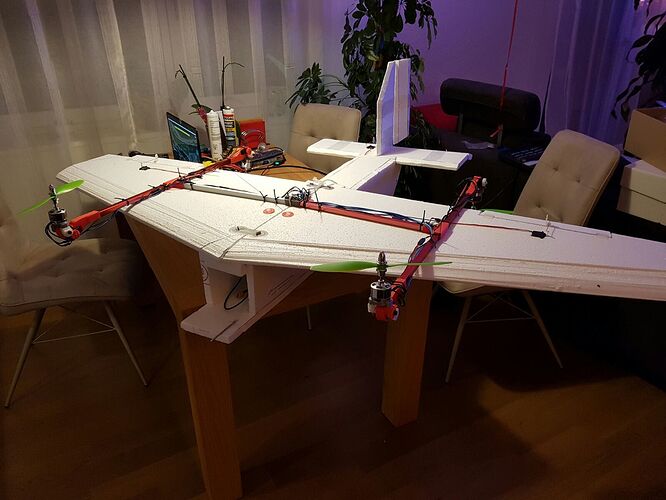 Thanks for your help!

Which airframe di you use? Does it yaw during the transition?