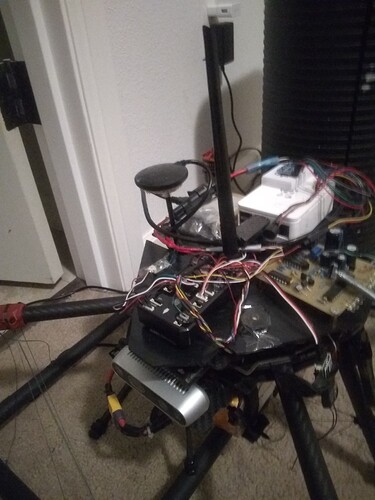 additionally I have installed obstacle avoidance and I’m running a companion computer on Raspberry Pi 4B that uses a Intel realsense d435, which is fully functional and returning image data and point clouds. I assume it only works in two modes mission and off board however if I try to run stabilize mode the PreFlight check fails because it claims the avoidance system is not ready or something of that nature. The avoidant system says something about path not available or something like that I assume that’s because there’s no mission defined.

On top of that I keep getting some weird GPS horizontal error.

I love some advice I’d love to hear those engines spin so I know that PX4 actually works I mean it sounds like it does but my experience so far has been pretty rough and frustrating. I don’t even have issues on APM at all but I’ve had issues here I’ll include a photograph as well because they always ask me to do that. FYI the GPS satellites have been ranging between 9 and 11, and the shop is averaging 1.5, but initially it would go as high as 8 or 9.

thanks for any input you were able to provide this is pretty rough and I could definitely use a hand.

Hey @Aaron_Sims, thanks for joining the PX4 forums.

I think you should post this on the APM forums, they can help you get started with APM using a Pixhawk 4.

@rroche I don’t have a problem on APM. I thought I made clear that my problem was on PX4. if it were a hardware problem it wouldn’t work on APM. therefore I consider it a PX4 issue and that’s why I’m seeking help on the PX4 forum.

If that’s the case, if you can provide logs that would be very helpful, which version of PX4 are you trying?

Are you testing indoors? The GPS horizontal error might be caused by weak reception indoors.

As far as the motors not spinning check your PWM_MIN settings, should be a value above 1000 (1100) that is correct for the ESCs you’re using.