Hello everyone, this is my first drone build and first crash. Is there something obvious in here? During my flights that day it seemed to be intermittently slightly losing power then regaining normal flight. This was my first flight adding extra weight (2 cameras) to try and get some inflight footage.

My first flight (with the power “surges”) added 25.7 oz. then I removed the heavier camera and left the smaller one on which only weighed 5.6 oz. Previously I hadn’t experienced any surges like this. 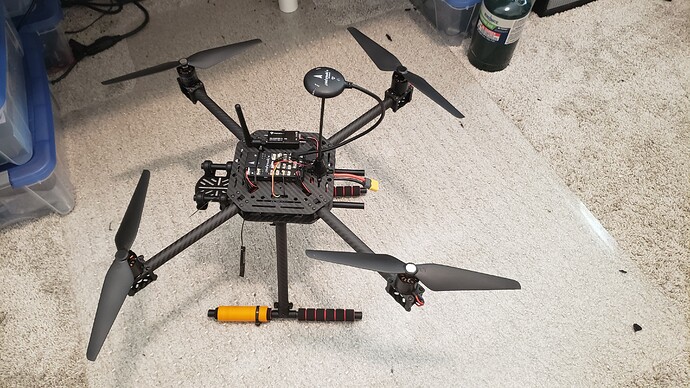 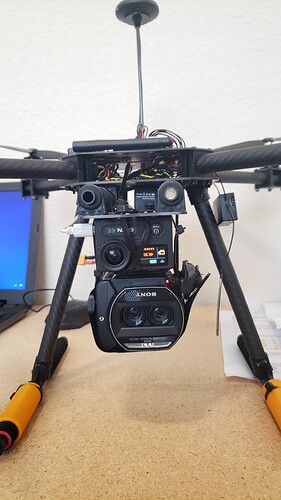 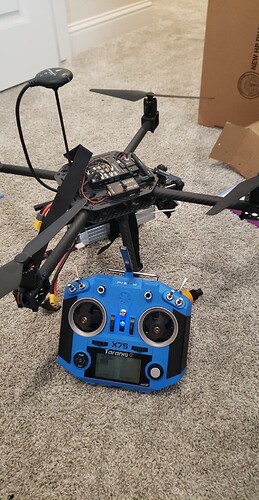 If you look at the first chart, the Fused Altitude Estimation shot up so the drone cut thrust to bring itself back down. This should normally follow the baro and gps pretty closely, but it does not.
Do you have some other altitude sensor on board?

I also noticed that the weight is not well distributed motors 1 and 2 have to work harder than 3 and 4.

No other sensors onboard, just the basic setup as I work on getting it up and running.

I doubt this is THE problem, but make sure you re-calibrate the compass after you add or remove things, like a camera.
Also read this:

Hi, could someone help understand what is the difference of these two in the flight log(GPS altitude/Fused Altitude estimation), when I already set EKF2_HGT_Mode to GPS? My understanding is if I use GPS as the primary height source, the fused altitude would use the GPS_RAW_INT data, however, my flight log shows the height reported by GPS and Fused one are different sometime. [Screenshot from 2020-09-27 16-17-38]

Oh, and what did you notice about the weight distribution? The larger camera was mounted very close to the center under the battery. The lighter one was further out front though. Was there more beyond the camera placement? Thanks for the insights!

Just that 2 motors consistently spin faster, which can mean imbalance. I have no idea what the actual balance is. The problem with that is those 2 motors have less thrust over head, so in some cases they could max out.
Could also be bad props, or something else.

I found that graph, thank you for the observation. I’ll check the balance of the battery placement and be more conscientious of the distribution. I’ll be good to fly it again with no additions and see if these items are back to normal.

Hi @BlackIce35 ,
As @jimdgit said, the altitude drop is due to the estimated altitude diverging. The divergence is driven by the accelerometer that has a tendency to have an increasing (negative) bias during high vibration periods: you can see that in the low-passed acceleration plot (top left) the the value goes more negative, even if the drone goes down in reality.
Regarding the imbalance, since those motors are in diagonal, it means that the problem isn’t due to an off-centered weight but by a constant yaw torque disturbance (you can see the offset in yaw control signal; top right plot). This is usually due to wrongly tilted motors. Having this constant torque offset often degrades the roll/pitch stability and could cause the large vibrations you have. 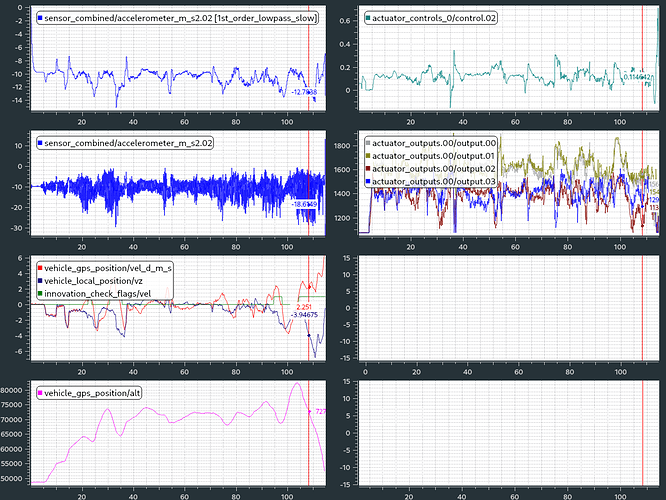 Awesome, thank you for that observation. It was still part of the setup process and I hadn’t considered removing it yet. I’ll jump on it!

Thanks @bresch for your insight.
I have the exact same air frame and have a similar problem with diagonal motors.
Since there is nothing on the frame I came to the same conclusion. Plus I could not figure how diagonal motors will do that.
I suspected bad motors because they are dirt cheap motors and the alignment looks as good as the other 2. I’d be interested to know your opinion

This is great feedback, I’m learning plenty as I see how to read these graphs. I’ll check the level of the motors. I’m definitely learning more through this fail than had it not occurred. Much appreciation!

Dang A slight adjust of the motors made a big difference. @BlackIce35 sight down the plastic motor block and align to the frame mounting blocks. They were only a tiny bit off.

Wow, great to hear. I can imagine I have room for improvement here. I’m working on that as we speak. I also learned of another chart to check regarding vibrations. I’m going to post that next.

I noticed another chart of my log that shows just how much vibration I have going on. Here are good examples, bad examples, then my chart. From the PX4 doc page on vibration 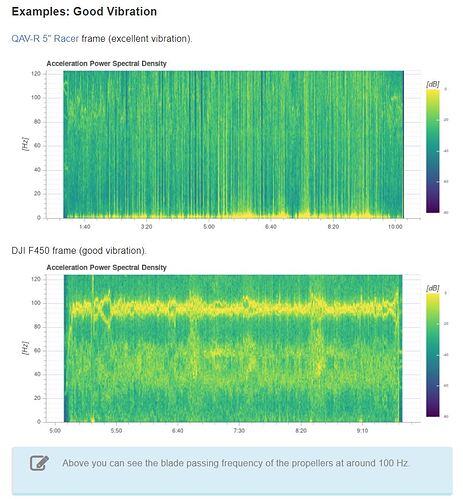 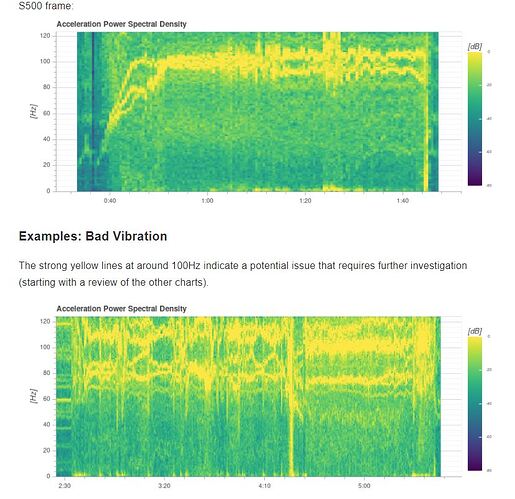 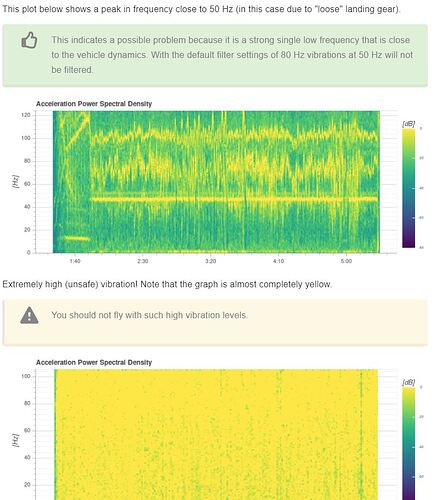 And my chart below:

I’ll have to work on cleaning this up to some reasonable levels.

Hey Jim, what’s a good method to level the motors? I’m not quite sure how I can better level them. Visually they are aligned, how can I get more precise?

I think I’ve got it, I’ve used a solid long object to place flat under the bolts on the frame, and then compare to the alignment of the bolts of the motor mount. I can see the first motor I check is off. 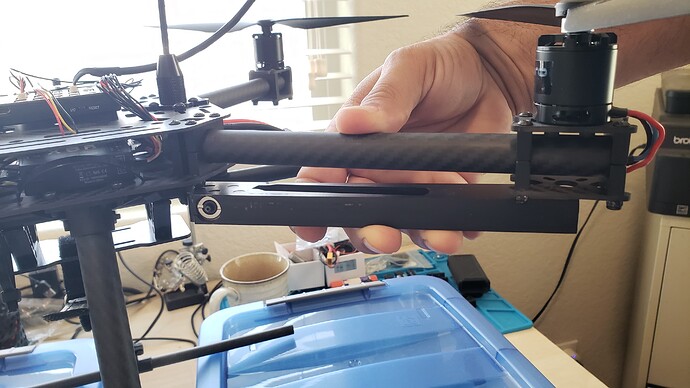 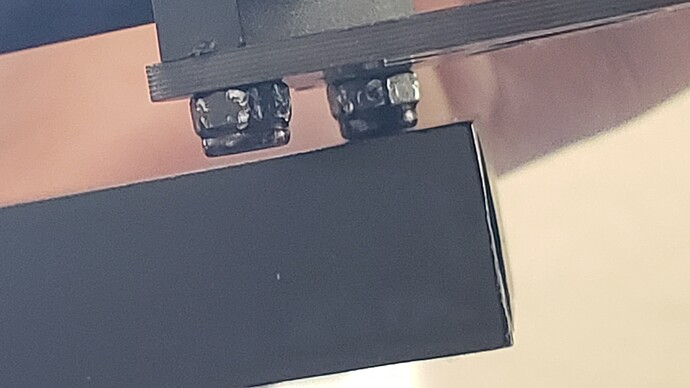 Like I said sight down the motor mount blocks - the plastic pieces that hold the motor mount to the rod and align to the rod mounting blocks on the frame.
The picture looks off because of the wide angle lens but this is how I did it: 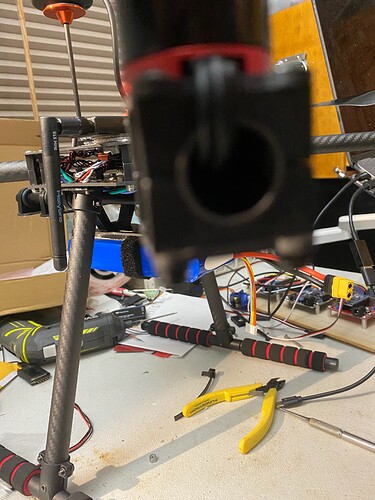 I also removed the zip tie from the flight controller so I have two big improvements to test out now.

Front left and back right would be 3&4
Scroll down to Quadrotor X.
https://docs.px4.io/master/en/airframes/airframe_reference.html
Eventually you’ll have it memorized.