I have searched the forum and elsewhere but haven’t found a clear answer on how to use a PWM pin ( or other?) as a digital output ( would be curious about enabling input too, but not needed at this time)

Would anyone be able to point me to some documentation or send me an example code that does this?.

I don’t think there are any user configurable GPIO pins. Look at px4fmu_led.c to see how to write code which uses outputs pins, and any board_config.h (in src/drivers/boards) to see how the GPIOs are configured.

Thanks Mark
If I wanted to use an AUX OUT pin, would it be enough to not enable PMW_AUX in the init.d/ startup script and then develop an application ( I mean such as https://dev.px4.io/tutorial-hello-sky.html) that subscribes to whatever channel is meant to drive the digital output?

Or are PWM_AUX pins always controlled by the main PX4 application, i.e. not available for other use?

Is any of this Pixhawk/Ardupilot info applicable in the PX4? ( Scroll to the very bottom of the page)
http://ardupilot.org/copter/docs/common-pixhawk-overview.html

look in fmu.cpp to see how the AUX pwm output pins are handled. You can probably get away with disabling all AUX pwm outputs, but note that there are other things like camera trigger which can be set up to use those pins also.

Would I disable the AUX pwm outputs by not calling
set PWM_AUX in the init script?

You can probably just edit rcS to start fmu.cpp with no (or less than 6) PWM outputs enabled. Look at the mode_pwm options. That’s assuming you’re using fmu-v2, v3 or v4

I´m also struggeling with this AUX Pin enabling for digital Input&Output on the Pixhawk.
I currently try to enable it with stm32_gpio…

But I did not find which Port and which Pin they belong to. According to the pixhawk guide (see also link above), those are virtual Pins 50 to 55.

I would be very happy to get even a hint how to manage this.
I work with Matlab SFunction (= c-code)

PS: I used stm32_… comands to set all ports to output and 0 and another time to one. But couldn’t measure any difference at the output pins…

@dagar helped me get this working, it turns out it’s quite simple

And then if you wanted to toggle AUX6 you would first call:
px4_arch_configgpio(GPIO_GPIO5_OUTPUT)

You would place this code in the constructor of a class you’re using (for example) as you only want to configure once.

Hi and thanks for the answer.

But I did not make it yet to enable it.
I Think I also have a problem with including the right headers.

I could not manage to include the last boar_config file, due to some error while building my function.
I tried to use the definition from drv_gpio.h
# define GPIO_SERVO_6 (1<<5) /**< servo 6 output */
but I think it is probably the wrong one.

I also inserted the set FMU and Set AUX_Mode, but it did not work.
(It also threw me an error. I think pmw4 was not know. - and I did not have a camera part in this referred code??..)
But regarding this, as far as I understand the webpage, I should be able to use the aux pins 5 &6 anyway due to default virtual pin setup.

Also the commands px_arch_gpio don’t exist for me - why? Is there a way to determine which board I exactly have oir what am I missing? I used:

Well… thanks ahead again and I wrote so late because I tried … but yeah. Did not work

That sounds odd… just to be sure, what board are you using? 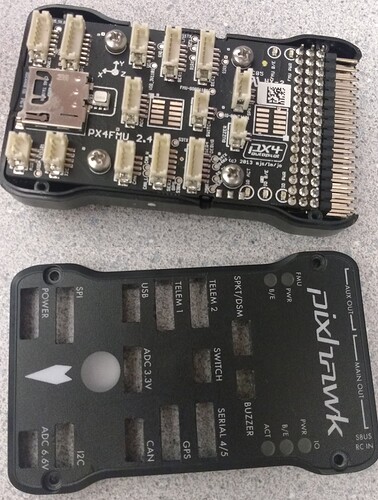 That is the same board I’m using, the Pixhawk.

I didn’t have to include any header files, the default ones worked fine.

Are you using a recent version of source code ?
Are you building with make make px4fmu-v2_default ?

Sorry typo, should be
make px4fmu-v2_default

For anybody coming across this thread years later like me and need to enable GPIO output, this is what worked for me:

Add these lines to the appropriate board_config.h file (e.g. boards/px4/fmu-v5/board_config.h) and modify them for the pins you want to use.

This defines the output modes of the GPIO pins you are interested in.
These lines specifically enable GPIO push-pull output on the MAIN_OUT pins 6 and 7 of the Pixhawk 4 mini.
According to: Pixhawk4Mini_pinout, these pins correspond to FMU_CH6 and FMU_CH7,
which corresponds to “Port D, Pin 14” and “Port H, Pin 6” according to: FMUv5_stm32_pinout

Now, in your own app like px4_simple_app.c from Hello Sky Tutorial, add the following code to configure the pins first:

@Murray_Louw Im actually trying your method now for Pixhawk 4. I think I am configuring it right but not able to control the gpios… hmmm. Im trying to make ti blink

And on my App 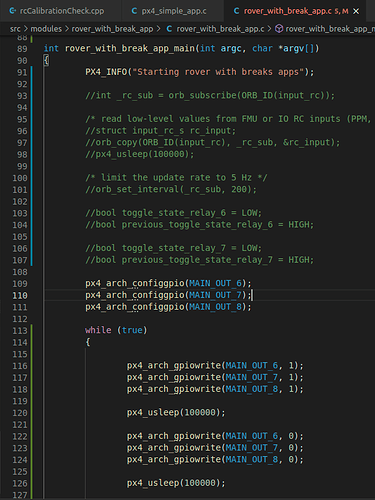 Do you have the excel sheet of pinout for pixhawk4 holybro ?