Hey!
I want to use the 433 SiK Radio Telemetry but the Data Rate is very bad as you can see in the Picture below.
Did anyone have an idea how i can improve the Datarate? 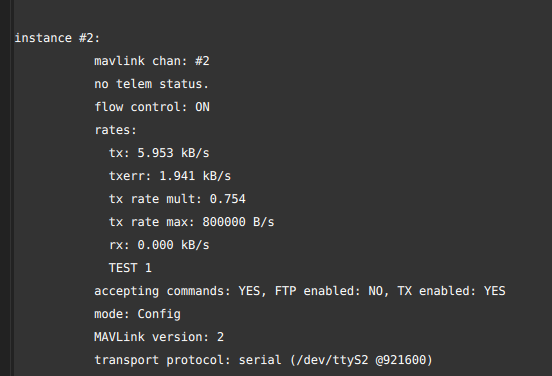 Those radios only work with a baud Rate of 57600 bits per second. That roughly gives you 7 kbytes per second. So it looks like you are already close to the maximum. Those radios are not designed to transmit high rate data at low latency but rather the opposite.

Okay thank you for your reply!
Yesterday we tried it with a baud Rate of 230400. That was the max Baud Rate we could get with the SiK (changed it with some AT commands (http://ardupilot.org/copter/docs/common-3dr-radio-advanced-configuration-and-technical-information.html#common-3dr-radio-advanced-configuration-and-technical-information) ). , but ROS claimed that the RTT (round trip time ) was too high. Is it possible to lower the RTT time without using a completely different Telemetry Module?

Hello. I am using Lairdtech RM024 2.4GHz but the maximum baud rate I can set it to is 57600 because of QGC. How/where can I see the latency and the bits per second?