I’m thinking about getting a 433Mhz telemetry link for my machine and after a bit of searching I have found this. FYI, it is very easy to display convenient live MAVLink data on your (9X/9XR/etc) radio screen using OpenTx and OpenLRSng. You can also simultaneously pass the…

The idea is that instead of using a 2.4Ghz to control the system and then 433Mhz for telemetry and ground station we use an OpenLrs TX and RX for both…

Has anyone Tried to do it with the PX4?
Any thoughts regarding potential issues?

It should work in principle. Let us know if not.

http://www.itluxembourg.lu/site/ i think this will work

Hi Leandro_Fina, thank you for the link this is exactly what I was thinking about.

Note that the instructions refer to APM / MissionPlanner, which are the wrong references if you want to fly with PX4. You need to use QGroundControl and PX4 in all of the places where the tutorial refers to them.

Of course. I will try it myself.

did anyone use openLRS together with px4? I tried to get it to work, but with no success so far. Here a screenshot of qGroundControl with an attached openLRS receiver via ppm on a pixRacer. The receiver is bind to a transmitter. 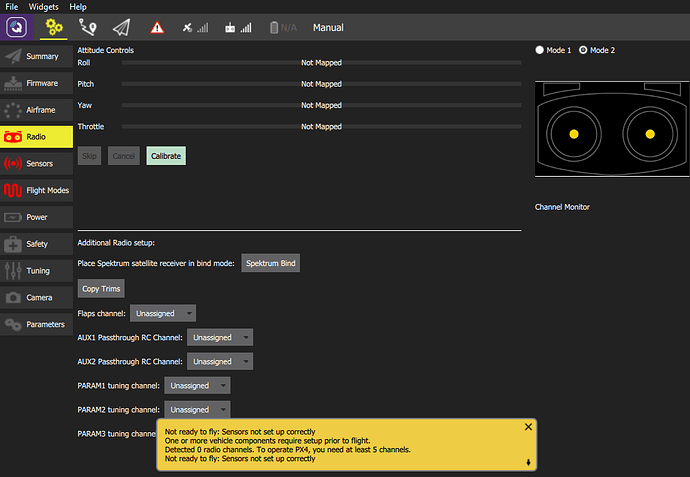 I also tried sbus und sumd. And i tried the latest APM on the PIXRacer. qGroundControl showed some more options while connected to APM but at the end i was not able to get the openLRS receiver to work.

would be nice to get some hints

btw:I tried it also with the latest master version of px4

PPM Input is well tested and stable. You should check your wiring and your receiver. Do you have a scope or logic analyzer to check the signal integrity?

I will check the ppm-signal with an logic analyzer later today. Is there a way to check if the rc-in port on the cpu is still working? maybe something is burned?

Just for curiosity, would it be possible to use another port than RC-IN for PPM-input?

@LorenzMeier
I did some measurements. The first thing i realize: there is a signal coming out of the RC-IN Port. 330ms 3,3V and 100ms off. again 330ms on and 100ms of. and so on. Nothing else connected to the pixRacer, Just USB with running qGroundControl.

//update:i did some tests with this simple ppm simulator, which works fine with px4. so the problem seems to be on the openLRS side. I’m investigating the differences at the moment.

//update2: the main difference: openLRS produces a inverted ppm-signal in comparison to the simulator.

I think that, that frequency falls into the 70cm band and may require an armature radio license. Check the rules in your area.other than those concerns it should work fine.

I’m just getting started but when you talk about telemetry why is the ground controller transmitting? Isn’t it the information produced on the plane/drone that needs to get to the operator?
I was looking at a 433mhz transmitter to extend my control range to 100km, not cheap.