Multi-Vehicle Simulation: Where is 'gazebo_sitl_multiple_run.sh'?

And then I’m trying Multi-Vehicle Simulation, but I can’t find any commands that could have been executed in the WSL environment.

https://dev.px4.io/v1.11_noredirect/en/setup/dev_env_linux_ubuntu.html
Follow the guides on the two links above to replicate PX4-Autopilot Repo and Firmware Repo.
In each directory, ‘bash ./Tools/setup/ubuntu.sh’ I typed the command and rebooted
A single Vehicle Simulation was possible with the ‘make px4_sitl jmavsim (or gazebo)’ command.

Why is there no ‘gazebo_sitl_multiple_run.sh’ in the Tools directory?
I’d appreciate it if you could tell me what I missed.

And the contents of PX4-Autopilot and Firmware directory look the same, but I wonder what the difference is.

WSL is Linux running in a virtual machine on Windows. Linux is the most tested environment, so if you have a Windows computer it is a good way to run PX4 because you can use the same scripts. If you have a linux computer, it will of course be faster.

There is no difference between WSL and Linux from the perspective of PX4. Most likely you’re running different versions of PX4. The docs you are looking at are PX4 v1.11. The simulation files moved under a sub-folder of simulation in the main branch, so might not be in the same place.
However it is possible that the documentation is not up to date. So first thing to try is searching for that file name in the folder. 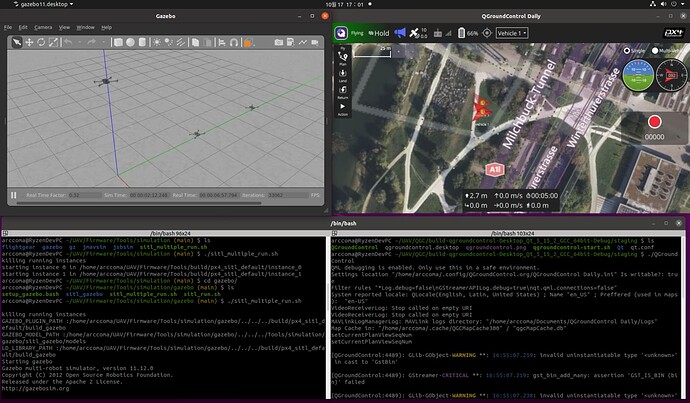 image1708×1000 188 KB
It was there ! Thanks to you, I found it. The location and name of the file have changed…
When, by Whom, Why? …
I think this change was improved by contributors to the open source project.
However, it does not seem easy for Linux beginners who have begun to travel to the open-source world by looking at the map of documents.

By the way, is this a common repetition ?
a road or building disappearing or newly created and a map being updated later ?
To build QGC for the first time on Native Linux, I also had to install curl and write the file user_config.pri myself.