I have a Pixfalcon setup as shown in the build thread.

I have completed the setup and everything works on the bench as expected in both multi rotor and fixed wing- except, the left motor does not run in any case. (Testing in ACRO flight mode)

Problem is an apparent lack of signal on MAIN 2 servo pin connector.
Left motor will run if I move the signal to MAIN 1 or MAIN 3.
Continuity is confirmed from back of connector on PCB to the signal pin on the servo header and the solder joints look clean.

I’ve looked through parameters but I’m not seeing anything that would resemble disabling port MAIN 2.

I ordered E-Flite convergence last week.
It will be fun. right?

It´s very important to do the compass cal with closed canopy cause only then the magnetic situation is the same as in flight. Both magnets connected reduce the magnetic interference to the fc. even better would be to remove this magnets completely … I had the same behaviour with the magnetometer calibrated without canopy.

The current version 1.7 rc 0 and 1 doesn´t support my tilt mixer mentioned above anymore. I was able to fly it successful a few months with the 1.6 master from august.


The tilt mechanism mixer still works perfect while the elevon outputs are completely dead as soon as 3 or more sources are used by the tilt mixer.
Concerning the PX4 vtol mixer I have an additional basic question: I would like to add vectored thrust into the mixer that only adds stabilised roll and pitch to the tilt mechanism while in FW mode. Being able to do all this with only one PixFalcon … without the need of a second fc.
(a bit like the original Horizonhobby controller does it for roll)
Currently I experienced that such additions are present in all modes.
Where can I find the mixer that is active in FW mode only?
Which mixer does the differential thrust part in FW mode?
1 Like
dagar December 6, 2017, 4:31am #66

@taileron the differential thrust is handled by the vtol controller (tiltrotor.cpp), but should be done with a mixer.
If there’s been a regression since 1.6 please open a github issue with details to help track it down.

Thanks, I hadn’t seen the issue. https://github.com/PX4/Firmware/issues/8312

@dagar now it might be that i´m running into a small problem the 1.6.5 standard release crashes the plane sometimes.
The version currently on my plane that flies absolutely stable (master from beginning of september flashed by QGC) rejects very often rtl and missions.
1.7 doesn´t support my tilt mixer anymore.
Is there a chance to get a master code version prior to 1.7 probably without the mixer issue for doing the real flight tests with increased pwm limits and retune the mixer

The first two flights of our Convergence after installation of Pixfalcon were failures. It flew ok in multirotor mode, but it didn’t do well in airplane mode.

Control surfaces deflected correctly on the ground prior to flight in stabilize mode in multirotor and both stabilize and manual modes in airplane mode.

If anyone can do an autopsy of the logs, here they are.
Log of first flight:
https://logs.px4.io/plot_app?log=4acb5cae-f192-422d-8228-75ebec5f0c7b
Following transition into airplane mode, throttle cut out, then returned to full throttle, then began to roll rapidly.

Log of second flight:
https://logs.px4.io/plot_app?log=d772eac7-7bde-4b42-bb95-589207898224
Following transition into airplane mode, it pitched down and rolled right. Unable to counter with rc inputs. Crashed hard and GPS was found 30 feet from crash site.

Your help in figuring out what went wrong is much appreciated.

We’ve ordered some and will cross-test this here in the next weeks. Thanks for sharing the logs!

I’ve created an issue here to track this: https://github.com/PX4/Firmware/issues/8540

I had a first pass at the log and what is very obvious is that the roll angle gets quickly out of hand. Interesting the set point stops in fixed wing mode, which might be according to configuration or the real issue - we’re checking that.

Hi, maybee I´m wrong in this topic. I have build a convergence with pixfalcon. It flies in stabilized setup but I have very heavy uncontrolled yaw movements to the right and left side. How can I suppress theese unwanted movements? 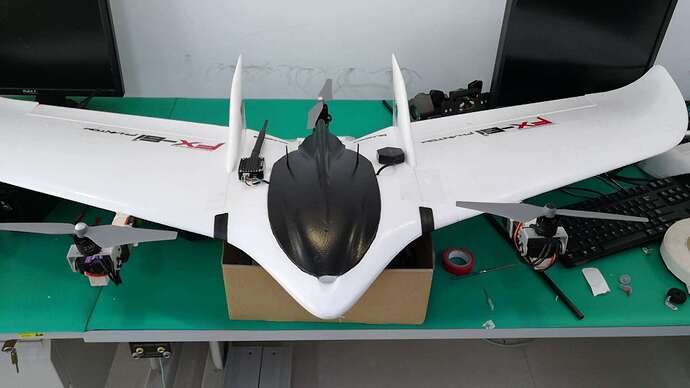 My FX61 is done:grinning:,how about yours?

My convergence flight test with PX4

sometimes I get an error “ekf internal checks” especially when it´s very cold outside.
https://logs.px4.io/plot_app?log=7cfbc241-2751-4e95-910a-61fd803140ac
That´s a log with the chinese PixRacer, now (after it got bricked - U304 burned, MPU gets very hot and doesn´t boot anymore) I changed to an AUAV one.
But still “ekf internal checks” sometimes (master feb.14th) . Sensors now are much more accurate with more reliable temperature readouts and no sensors inconsistent errors anymore.

Have you tried using the temperature compensation?

Tried it, but got no reliable temperature readouts from the fc (listener sensor_mag / baro) and while a cooling fan blows into the electronics without cases, after few minutes the temperatures are showed way to high but almost stable.
Finally the “ekf internal checks” don´t really block arming, flying missions or rtl anymore. Is there a way to get more detailed information which sensors data is the source of this notification GYRO, ACC or MAG? ACC calibration I have to do out of the plane in the housing to make sure fc is aligned rectangular now temperatures rise much faster as builtin to the plane.
Log of a similar flight with new PixRacer (AUAV):
https://logs.px4.io/plot_app?log=70945461-9ce3-477b-8c0f-e63fa5c5f55e

by disabling mag1 it was nearly possible to get rid of this error (only 1 time in 5 flights).

Currently two issues are left:
1 - I´m using a second fc (for mixing vectored thrust in fw) in V1.6.5 it was possible to neutralise the yaw set value in stabilized mode by switching to acro for a short moment.
In vers above 1.7 the set value jumps back to the old heading when switching back to stabilized while the plane has to fly an extremely sharp corner.
Mostly I do transitions back to mc within gliding to the landing point without any yaw authority cause motors off / no builtin rudder the yaw set value changes a lot in this moment while gliding.
And gliding only works when the tiltrotors are swept upward to cause less drag. Another thing is when yaw isn´t neutral one of the motors swivels into the airflow and begins to circulate and generates assymetric drag in the opposite direction of the yaw function and has to be corrected immediately by manual stick movement … very dangerous
Is there a parameter to reset the yaw set value to neutral before enabling stabilized mode?

2 - In mission mode there are massive yaw (roll) oscillations (mc) when there is heavy wind. It can only be corrected with a static tilt value e.g. 20 … 35 degree to result about 0 degree pitch relative to horizon (a bit nose up while fighting against the wind).
VT_WV_LND_EN 1
VT_WV_LTR_EN 1
VT_WV_TKO_EN 1
this parameters improved it only a bit
Does it make sense to lower VT_WV_YAWR_SCL to zero ?
Wouldn´t it make sense to try to stabilize pitch to horizon and add a tilt value to hover forward in missions?
For position mode I added some mixers into the tx and that works perfect even in very heavy wind (mixing an amount of tilt into pitch)
https://review.px4.io/plot_app?log=3f05910f-a588-440c-80f2-f1a9cee1f6d7
this log contains a few transitions via zero throttle and gliding and a bit yaw oscillation in mission afterwards.

@tumbili Could you look into this and provide guidance? Thanks!