VTOL does not behave as expected after transition

we are working on a tandem-wing VTOL with tilting wings and have some problems with the transitioning as well as the fixed-wing flight.
The design is aerodynamically not very stable but should fly with the help of a flight-controller.
After solving some issues with coupling effects from roll and yaw, by disabling differential thrust and adding tailfins (Winglets), we are able to achieve a full transition.

We transition in stabilized mode, but as can be seen in the flightlog the VTOL rolls to the right and goes into a dive after the transitioning. This also happend the same way in three more flights.
I was hoping someone might be able to point us in the right direction if we are missing something. 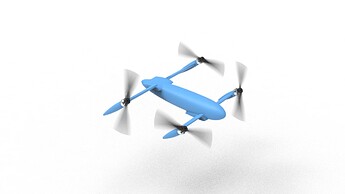 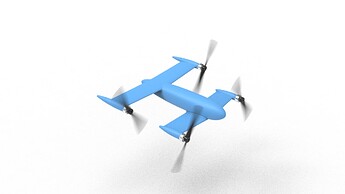 Cool design! Have you ever flown it in fixed-wing before or is this the first time? It looks to be like the FW rate/attitude controller is badly tuned. The system begins to oscillate around roll during the transition, and they build up even faster after the transition (probably because then the MC motors don’t try to compensate) (see plot top right).
Looking at the roll rate plot (bottom right), I see that there is always a large delay between estimate and setpoint (see bottom right). 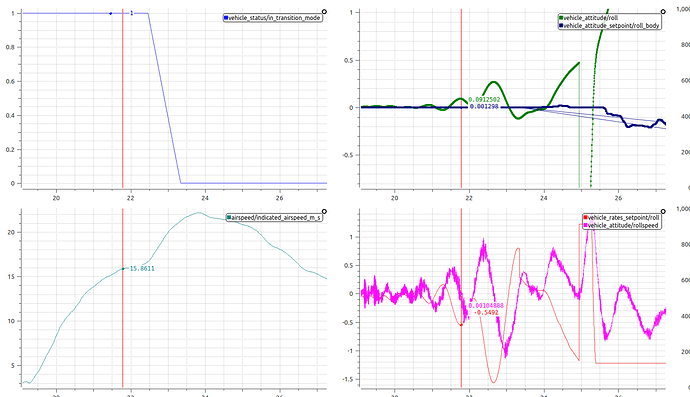 Further, I noticed that you have some estimation problems (see the message log). They could result from a bad magnetometer placement, as the current through the motors affects the mag reading:

image.png824×323 26.2 KB
If possible I would try to get more distance between the mag and any power cable/ESC/motor.

Let me know how it goes!

Thanks for your quick reply.
This was the first time we managed to transition all the way to fixed-wing mode. So we did not do any tuning on the PID’s.
We will try again with increased rates, probably this weekend and let you know if there are any improvements. You are right with the fact that the power wires are right next to the FC, its kind of hart to change their position though since we are very space constrained. We could alternatively use the magnetometer of the GPS instead of the built in one.

Do you use a special program for your graphics?

Yeah sure, let me know how it goes, good luck!

I would strongly recommend you to use the external mag.

For plot analysis I use both flight review and PlotJuggler (https://github.com/facontidavide/PlotJuggler).

Thanks again for the help, sorry that i did not reply earlier.
We went flying again and tried playing with the PID’s but did not really get it to work. The aerodynamic design itself is already kind of unstable and we also have some play in our current tilt-mechanism design. That’s why we take a brake with the project.

Regarding the PlotJugger Apl., do you just import the .ulg files directly.
It dos not seem to work for me, used the recompiled Windows version. (Win 10)

@Thomas.leitgeb okay, feel free to ask for inputs again later in your project.

About PlotJuggler: I don’t use it on windows but Ubuntu, so can’t help you much there unfortunately. I think in theory it should be supported, maybe during the build something went wrong. Maybe it’s worth to open an issue on Github for it.