During ground testing (props disconnected but motors running), commanding a transition does not set the tilting motor(s) to their interim tilt position (VT_TILT_TRANS). Instead they sit at the VT_TILT_MC position until the airspeed reaches the transition completion airspeed at which point the motor(s) travel to the VT_TILT_FW position.

Checking the logs confirms that no change in output is sent to the servos until the VT_ARSP_TRANS is reached.

All parameters are at defaults. Tilt servo uses the exact mixer from the firefly6.

Am I missing something? 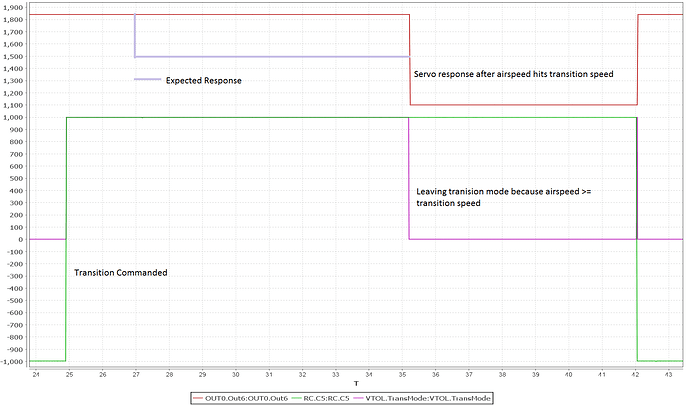 Did you do something to trick the land detector? The behaviour is different if you’re landed. https://github.com/PX4/Firmware/blob/master/src/modules/vtol_att_control/tiltrotor.cpp#L219

Just did a quick flight test and the error persists even in the air. The behavior appears to be exactly the same, though the airspeed obviously never got high enough to complete the transition.