Take off stability of a custom frame

I built a quadcopter similar to Holybro’s QAV250 but with an NXP flight controller. I installed px4 firmware and calibrated sensors and ESCs. I have the following issues:

Any suggestion on how I can fix these issues?

I would probably suggest to get a bit more familiar with flying PX4 with a frame that is less under-powered, to learn to fly.

Thank you for the tips. According to this documentation (Actuator Configuration and Testing | PX4 User Guide) I can adjust the position of the motors but I couldn’t find them in the QGroundcontrol (screenshot). 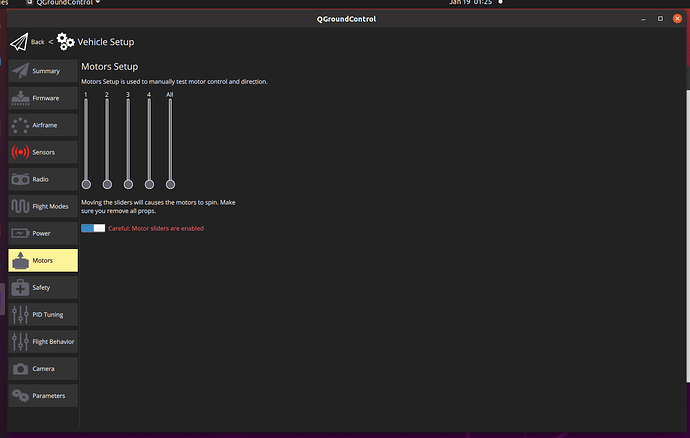 Hmm, good question. So how can you make the new actuator control panel appear

Open the view in QGroundControl here: “Q” (app menu) > Vehicle Setup > Actuators (tab). The displayed elements depend on the selected frame, with outputs mapped by default as shown in the Airframe Reference.

@bkueng which airframe uses the new config? Or how could @Kurosh get the new setup?
I believe one way would be to build and flash the main branch rather than the latest stable (v1.13.2) release…

On 1.13 you can just enable it via SYS_CTRL_ALLOC=1. The versioned docs still contain the hint: Actuator Configuration and Testing | PX4 User Guide.