We started using the auto land feature this week and for some reason, the vehicle always does something strange at the end.

It will appear to almost land (just barely making ground contact), then throttle up the motors again and translate slightly to one direction before finally landing.

I was wondering if anyone had any tips for diagnosing that or could help me root cause it?

This could be the land detector. When you land it falls out of land detected state and then detects it again.

Make sure you follow the tuning guide here: Redirecting... Page moved
Namely your hover thrust setting is at the default 0.5, while the log shows that your actual hover thrust is 0.6 - 0.65.

Thanks for the response Nicolas!

I’ll report back here once we’ve root caused it, but if anyone else has any ideas I’d appreciate the help.

We have been seeing a similar issue of a hop during landing in altitude and position control modes. The aircraft will touch down then throttle up and maintain a centimeter high hover even with full stick down. We’ve flipped a couple aircraft when a leg touches and breeze hits during this several second ordeal.

We’ve partially solved the issue by changing EKF2_HGT_MODE to GPS (1) from Baro (0). Our conclusion is that the prop wash is causing an estimated altitude drop and the mc_pos_control is fighting that and taking it into a hover.

We’re are looking at improving our enclosure around the Cube to prevent external wind and prop wash from affecting the internal baro measurement.‘’

Here is an example plot. The landing occurs around 13 seconds and from there until the actual landing detected the operator had the throttle stick fully down. 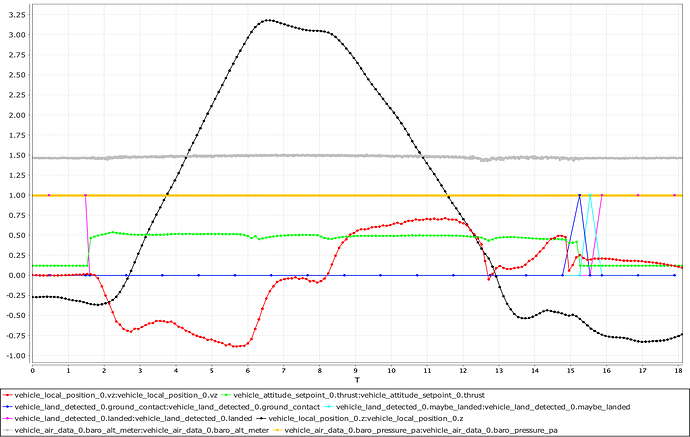