I hour later after I’ve recharged the batteries, I could manage to fly again. This time, I’ve flown almost a 20-minute flight. Then I’ve deduced that this might be related to z velocity PID’s so I tried to reproduce the PID controller tuning example described in Flight Plot example. While I was doing this, the copter started to not respond to my stick commands (while I was on stabilized) and actually went to opposite direction while I was pulling the stick towards the position that I was standing on. Later on as a last resort, I tapped the RTL switch and the copter switched to RTL mode, although only to further open distance and start flying away and up. After It has reached to an altitude of ~300 meters, I have lost sight and data link of it, unable to recover from the crash. I only have the .mavlink file from the QGC session for this flight and nothing more.

Please help! Could anyone help me to troubleshoot the z-axis problem described in the logs and which lead to a flyaway for me, so that I can be cautious and careful about what might have caused the problem, so that it is not reproduced again.

is this problem only observed in 1.6.x or before?

z altitude hold problem I faced too many times and tried out some pid tunings but all tries were ended up successfully by chabging hardware (pixhawk), it is usually a baro drift, i would check the foam of barometer, or try same configuration with only changing pixhak, also it may be because of accZ meaning a vibration. u may use vibration dampener, also check accZ values during flight and no arm situations. in disarmed, it should measure gravity, in flight, it should not exceed 15 m/s^2. if so, u have a vibration.

Hi basic problem is you have very high level of vibrations 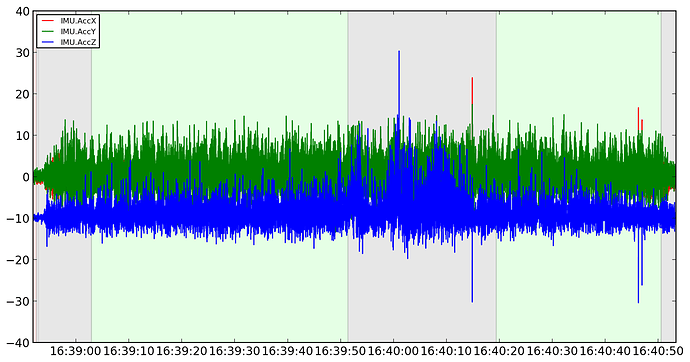 Here you can see vibrations on my copter(250class racer, pixracer hard-mounted to the frame) 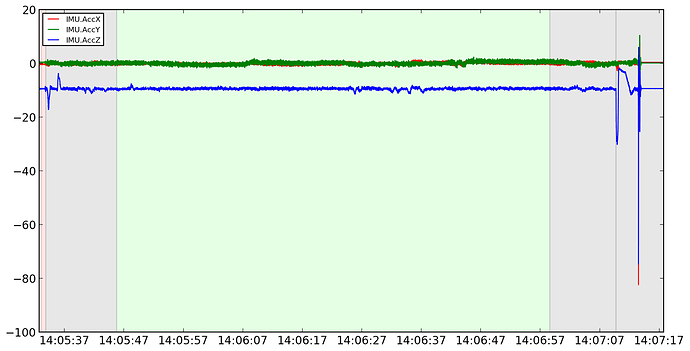 I had similar problems since update to v1.5.3. It too was trying tune pids but later realized it was an EKF2 problem. Here is one of the logs that EKF2 went bonanza mid-flight.

Still no idea for a fix, I just use the old EKF for now.

In Which firmware version you can revert back to old EKF?

This was the first time I was using 1.6, although I don’t think the firmware is to blame. I think the problem is related to the hardware.

I faced the same exact issue several times, and caused me a crash of a several thousand of dollars build !
I changed many Pixhawks, and changed firmware from 1.5.1 to 15.5, trying both LPE and EKF2. All produce the same problem.
An issue on github is opened,

I think it’s mainly a firmware problem, as it used to work fine with me with much older firmware, 1.4.4 I guess. However those old firmware versions do not support Lidar/Tera Ranger sensors, which I needed to use. I hope it gets fixed soon!

Is there any progress resolving this issue. I think that I face the same problem.

I’m using latest stable with LPE which is the 1.5.5 dev branch (according to what qgc says), and I haven’t had any problems regarding z.

@deksprime What is your configuration? I am trying to use PX4FLOW + Laser Lite (PWM) + No GPS. Can you go into position control and maintain position?

@deksprime I used stable version 1.5.5 with LPE, and got the same issue. I guess, you have not got unlucky yet

Today, I had similar problem. I was not able to bring the copter down in Altitude hold mode, even by pulling the throttle stick all the way down. I had to switch to Manual mode in order to bring it down.

A discussion for this is here

I’ve lost two quadcopters this way, but I guess it was due to really bad oscillations on my configuration. But in all of my trials, I had GPS. I think my problem was due to noise -which I have later noticed- was caused by the companion computer (Raspberry Pi 3). Especially if you are using an I2C splitter (if it is a clone then the noise levels get even worse). So beware of the vibrations caused by poor damping of the fcu, as well as EM noise caused by on-board electronics. So I guess it’s not a software issue but a poor hardware configuration issue (at least in my case)

Recently, I flew couple of flights with no problems until the last two flights showed similar problems. In those tests, only baro and gps were used, and no Lidar was mounted. I could not bring the copter down in ALTCTL mode (or position) even though I was pulling the throttle all the way down.
Here is a log,
http://logs.uaventure.com/view/HNFY7UpSuabPusXNsj2vzM#top
It’s just weird, that at the same time of the tests, it exhibits different behavior, while the weather conditions are the same (low wind)!