Parameters are missing from firmware : -1: 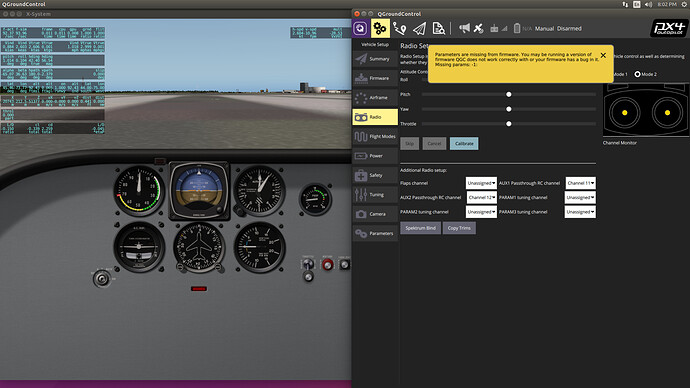 As in the screenshot error message, sometimes QGC complains about missing parameters, but doesn’t tell me which parameters are missing (other than “-1”). What does this mean ?

The firmware is based on a recent master PX4 with a few code modifications, and some other versions of QGC (e.g. daily build vs stable or linux vs windows) don’t show this warning (with the same firmware).

Does that show up specifically when you click the Radio Setup tab? Looks like there is a bug in QGC someplace on showing the right name.

No, it does it a short while after a connecting the pixhawk in, regardless of what I do during that time. Just time for the pixhawk to boot up, the connection to set itself in, and QGC to look for them parameters in the firmware, I guess.

Can you create a QGC GitHub Issue with details for this and we can continue there.

I don’t have access to the machine right now but I’ll check the QGC version & build and document steps better the next time I get to it. From the screenshot I think this is the daily linux build (from the day I posted the issue), because the stable build has the version number next to “QGroundControl” in the window title bar.
I also installed the stable linux build on the same machine, and I seem to remember that it didn’t trigger the warning, but that memory is fuzzy. I am sure that on a recent windows QGC the warning didn’t appear, though.

Has anyone resolved this issue?

-1 thing is fixed in daily builds. But didn’t have steps to reproduce the blank parameter name which is showing up in the error message. Ifyou can reproduce in a daily build re-open the issue with details.

I’ve seen this countless times. Was generally observed when coming from a previous version of px4 and updating to a new version as well as a new version of qgc. Usually saw it only when clicking on modes setup but sometimes just as above. Just after connecting but with countless flights there has never been an issue.