I am using latest release of Ardupilot on Plane. I planned a mission using ‘above terrain’ (mission planner would call this Terrain frame) as the initial reference, then added waypoints, and finally a landing sequence, then uploaded this to the plane. I also saved the mission to a file. I then disconnected the plane and closed QGC, then opened QGC again, and loaded in the mission from the saved file. The landing sequence doesn’t show the same now. Instead. It shows a ‘Land Start’ point in the mission which is 2 steps from the landing point instead of the landing sequence I had saved, and it has inserted a waypoint in between this Land start point and the land point itself, and now all the altitudes show with the AMSL frame type instead of Terrain frame - the altitude values of each waypoint are converted to AMSL values though in this instance - so that in itself is OK as both the values and the reference frame match (but a bit annoying as no way to show it back in ‘above terrain’ values), but if I download the mission from the plane to overwrite the one on the screen - the mission looks almost exactly the same except that it has now replaced the AMSL reference altitude values with the ones I originally entered (30m that originally entered using an ‘above terrain’ reference) but with the frame still showing as AMSL - so my 30m altitude now shows as below the ground level on the chart at the bottom of the screen (see below). Really messed up, and I would say dangerous! 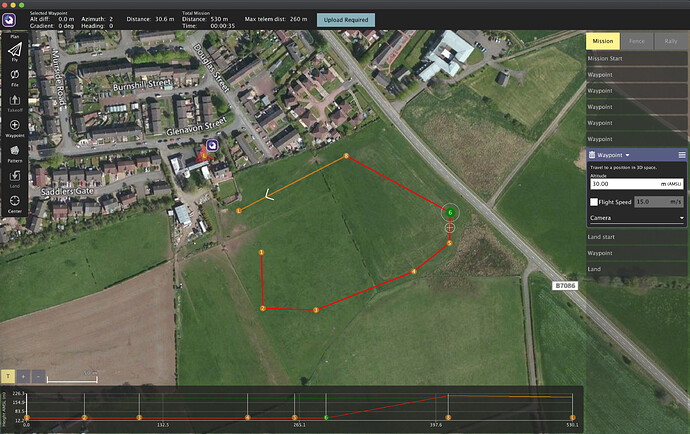 Just as a follow up. I just launched the current version of Mission Planner and downloaded the mission from the plane into the planner screen. The values have been saved to the plane as AMSL frame even though the actual values are related to Terrain - so QGC really messed up here! I am able to change this in Mission planner to Terrain frame to correct this though and on saving this back to the plane and reading them back again, I can see that Mission Planner has saved these correctly. This hopefully demonstrates the issue and I am happy to provide more details if devs need it.

Sorry, just realised I posted in the PX4 specific forum. I will post instead in Ardupilot forum, Sorry. Admins please feel free to delete this post.