Hello PX4 experts.
I’ve set up the pixhawk on 450 class quadcopter and it seems working perfect.
After several “AUTO” flight, I was wondering if there is way to fly a multicopter with heading fixed in one direction during a “AUTO” flight mode. Unlike fixed wing aircraft, multicopters or VTOLs can fly sideways or backward. So I thought some may want to fly it different ways.
Here is a simplified drawing to illust the flight pattern. 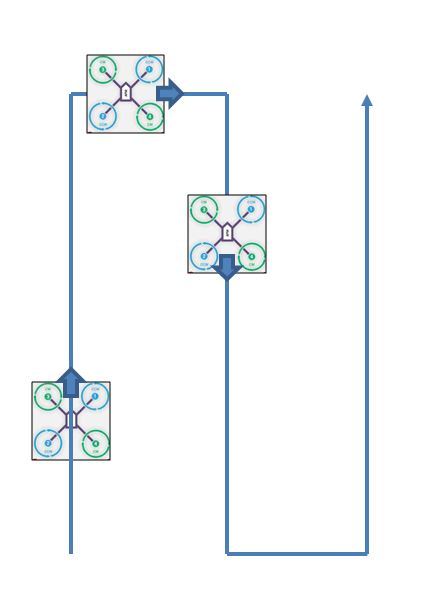 Thank you for taking your time.

You can specify the yaw behavior during a mission with the MIS_YAWMODE parameter in the Mission section in QGC. What you probably want is “Heading as set by waypoint”. The multicopter will then follow yaw setpoints as specified in each waypoint’s param4 (Select a waypoint, click on the hamburger menu of that waypoint and click “Show all values”).

Hello Nicolas,
Thanks for your reply.
I’ve checked the waypoint file format in both QGC and Mission Planner.
Like you explained, I found that there is yaw input which is Param4 in the waypoint file format.
Since I’m not so much familiar with QGC, I tried it with MP instead.
However the aircraft(quadcopter) was not maintaining heading as I was expected.
More precisely, it was just the same as Param4 set to 0.
For your information, I’ll upload the waypoint input I made for the test.
Any comments will be appreciated. 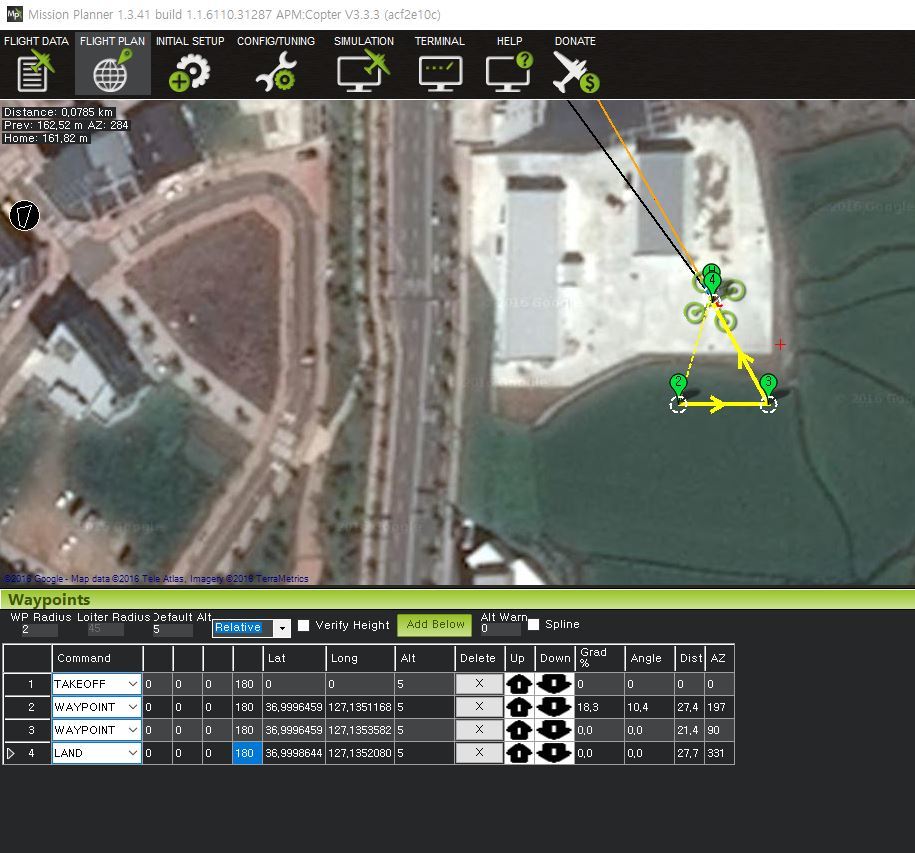 I’m also looking for such a possiblity as I’ll need this feature for fawn Rescue Missions where we’ll use a Search Pattern over a field and would also like to maintain the same yaw angle through the whole mission.

Most convenient if this could be set in the Survey - which is still bete.

I’m not familiar with mission planner. If you’re flying with PX4 (and not APM), QGC is recommended.
Could you upload a log of a mission flight where you have the settings as described but you’re still not seeing the desired behavior?

I’m using pixhawk and I’ll study the QGC as you recommended. In the meantime, I’ll send you the flight log if it is in the memory. I guess it should be there.
Thank you very much.

I changed the file extention to .pdf since .log files were not be able to upload.

That’s an unusual file format. Logs from the PX4 flight stack should be either .px4log or .ulog.

What autopilot firmware (not hardware) are you using? PX4 or APM?
How did you transfer/download this log?

For future reference, .px4log logs are ideally uploaded to http://logs.uaventure.com/ to share on here.

Missionplanner does not support PX4. Don’t use it, it can mess up the whole system forcing a reset.

If you want fixed heading you can set consult the navigation parameters in the editor and set the heading mode to fixed.

Thanks for your help.

That means you are not using PX4 and you should as a first step flash PX4 through QGroundControl.

I have found the following definition for MIS_YAWMODE

If I choose 0 where in the Waypoint can I enter the value I want to use? As an extension to Survey it would be nice to have a boolen if the YAW Angle shall be kept the same over the whole survey or if the vehicle should turn around to “look” at the next waypoint created by Survey.

Shall I create an Issue (Improvement / Feature Request) for this in GIT? If so rather PX4 or QGC?

The missing bit is in QGC as it should allow you to set a heading per waypoint.

Oh I see. I’ll try to flash PX4 then.
Thanks for your help.

I have to take this up again. In the latest Parameter Configuration List the Meaning of the Values has changed vs the list above:

In QGC it is still possible to set a YAW Value for single Waypoints, but not for a Survey for instance. So this has become unusable for me. I need to be able to set a fixed YAW angle, that is valid throughout the whole Survey (do not turn at turnpoints).

This was possible with last years release. Any hints (@hamishwillee / @LorenzMeier)?

This is what I would like to do (with a MC, FixedWing is just for illustration): 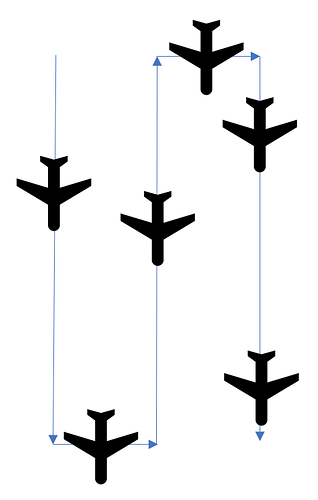 I’m guessing that if the yaw is set in the mission item it will override the setting in MPC_YAW_MODE. @MaEtUgR or @DonLakeFlyer Can you confirm?

@DonLakeFlyer If so, does QGC further have the ability to set the front of the vehicle to point in the same direction irrespective of the vehicle heading across the mission (or would each mission item have to set things separately)?

I think for the use case @Andreas_Hoffmann describes it would be useful to plan the survey with the desired yaw already correctly planned in the mission instead of changing the vehicle configuration for all missions flown.

That said MPC_YAW_MODE is worth mentioning. This parameter affects the yaw also in a survey and it will override what is planned in the mission. Is there the need to also have more options like: “I don’t care about yaw, just keep it”, “Always keep yaw heading to north” or similar?

Related: With a ROI this parameter is the one changing yaw behaviour: MIS_MNT_YAW_CTL.

I have set MPC_YAW_MODE to 3 (by exclusion, since all other Modes would surely not make sense to what I’m trying to achieve). MIS_MNT_YAW_CTL only applies to the Mount/Gimbal IMHO. As I only have a 2 Axis Gimbal this would not help much. Still there is a 2nd reason for doing it the way I do, as the FPV Antenna is on the rear. I have to fly some Distances (Up to 500m in 75m ALT the Analog Signal does not distribute well to the Front (because of fixed Landing Legs). So if the Copter turns around, my Signal degrades quiet a lot, since looking for (Rehkitz) with a FLIR set to B/W Mode adds a lot of Color Noise making the Signal unusable.

In earlier Versions of QGC & PX4 it was possible to fix YAW (as described further up this thread). Is there a new possibility to do so??

The missing bit is in QGC as it should allow you to set a heading per waypoint.

Which it does. But you cannot plan a Survey which has a specific fixed Yaw to it.

@DonLakeFlyer I assume it earlier worked since YAW Mode 0 would keep the Yaw Angle as it was when Taking Off when not changed by Waypoint. Since the Meaning of the Parameter Values has changed it is no longer possible to do so. Any recommendations? Should there be one more Value in MPC_YAW_MODE in order to keep YAW as specified by Waypoint, as it was before? Or would you extend Survey to a flag for keeping YAW as it is when entering the Survey?