First test flight after Pixhawk firmware update. Once the drone was in the air it refused to descend below @8-10m (my visual estimate - telemetry reported negative 8m at that altitude). Repeatedly attempts to land in both stabilized and RTL modes were unsuccessful resulting in crash after the battery ran low.

The flight log is here. Any assistance analyzing it to figure out what the cause would be helpful.

Which pixhawk do you have? The first thing that stands out to me is the barometer altitude. 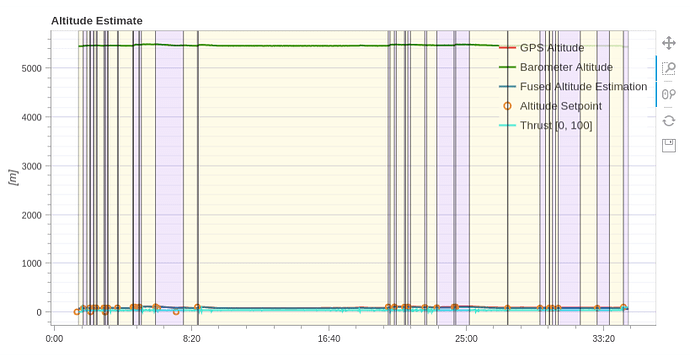 You were in altitude control mode the majority of the time. Did you have MANUAL or STABILIZED modes configured on RC? Those modes have manual throttle control and could have been used to bring the vehicle down.

I’m no Expert but I have had a look at your Log. There are a few things that jumped to my eye:

Thanks for the feedback.

I think you’ve both hit on something with the lack of stabilized flight mode (i.e. flight mode configuration issue). I’d missed that before but its rather obvious from the log now that it’s been pointed out. You can see I was able to manually change altitude in altitude hold mode though so I still don’t understand the ‘floor’.

The weird barometric altitude leaped out at me as well, but it was so far off the GPS altitude that I have no idea how to interpret the mismatch.

FW should have been latest stable as of mid-November (flashed with QGroundControl around then, but I don’t have an exact date).

Props were matched and had been used on prior flights. I need to absorb the rest of this info further, but in the meantime I appreciate the help.