Hello out there! So I’m building my first quadcopter, felt perfectly confident going into it and now I see I have several questions that have brought my build to a halt. Any help would be greatly appreciated. 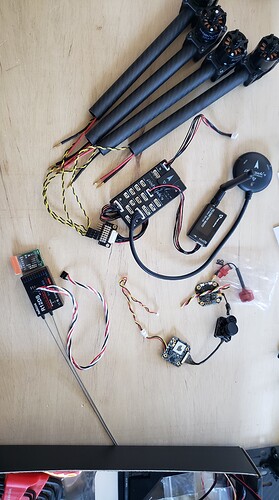 Here’s what I have:
HolyBro x500 kit Link to the kit

Okay so here’s where I have questions:

UPDATE: I saw another video on the tx/rx, do I have my wiring correct now? See update pic below. I also see that the PRM-01 sensor provides telemetry data on the battery status. Is this strictly for the battery whereas the HolyBro telemetry radio provides additional info? Am I doubling up on telemetry or are both useful in their separate ways? 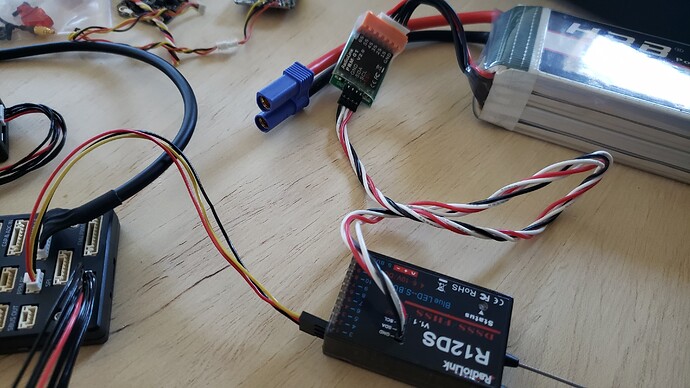 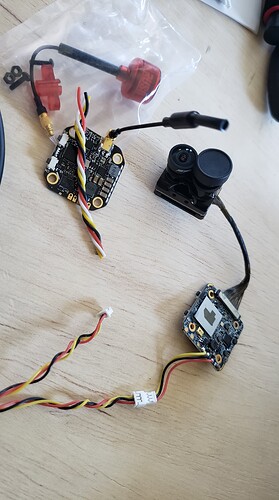 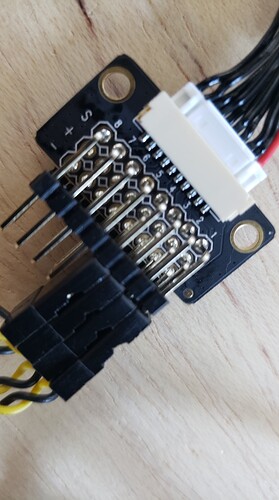 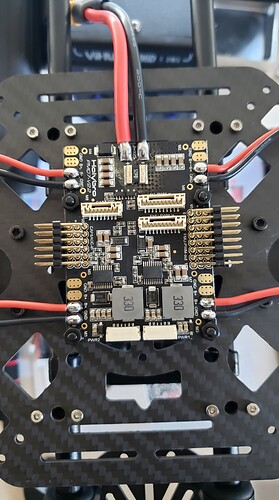 Thank you in advance, I’ve spent hours searching for answers and I want to get my questions out there as I continue to search. I swear I though I had this setup down and understood!

Thank you in advance,
LM

And is the RadioLink Radiolink AT10II even a compatible unit for the pixhawk? Is there a better suggestion for a tx/rx in this price range?

Probably. I did a search and it says SBUS and PWM output are supported.
These are supported according to http://docs.px4.io/master/en/getting_started/rc_transmitter_receiver.html

How in the heck does the Radiolink R12DS connect to the pixhawk 4 unit? The connections on the existing wires are not direct plug ins the the style on the pixhawk.

Look at the above link.

Telemetry Radios: I see the kit came with two radios, am I using two in my setup? I see it plugs directly into the pixhawk 4 unit, that’s easy enough. So next, does it simply collect data and send it out to my RadioLink transmitter? Also, what is the second radio for???

Some RC systems also get telemetry back from the device to your handheld controllers, but probably not in this system. For that you’d need an FrSky system.http://docs.px4.io/master/en/peripherals/frsky_telemetry.html

On the PM07 power management board, is the only thing connecting to it just the black and red wired from the motors, and the power cable from it to the pixhawk?

Hmmm. Rather than trying to answer your questions, perhaps I should instead suggest you start by looking at http://docs.px4.io/master/en/frames_multicopter/holybro_x500_pixhawk4.html

First, thank you for the time put into this info hamishwillee, it is much appreciated!

Okay, so on the RadioLink AT10II I do see that it’s compatible based on this info from their website:
Q: What are the compatible receivers to AT10II?
R12DSM - 12 channels (SBUS/PPM signal output)**
And I think I have the wiring sorted out after my other research into it.

Telemetry radio, haha, okay I was overthinking that one, it’s for the laptop and used with Mission Planner. I was thinking it had to do with the receiver and/or the monitor. But as you noted as well, without it being a FrSky it may take extra work to get up and running in the same way. I may exchange my receiver for a FrSky to simplify the setup.

PM07 - I used that webpage/link as my reference for the build but got caught up when I saw two seemingly opposite suggestions (see photos below):
Is the setup supposed to be like this as shown at the top of the page: 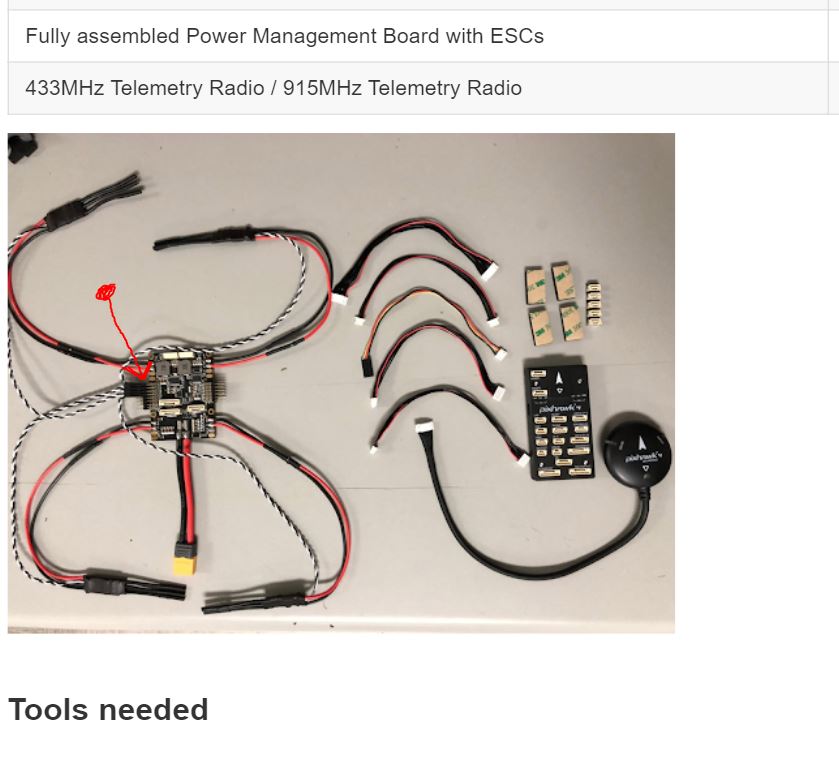 Or like this as shown further below on the page. 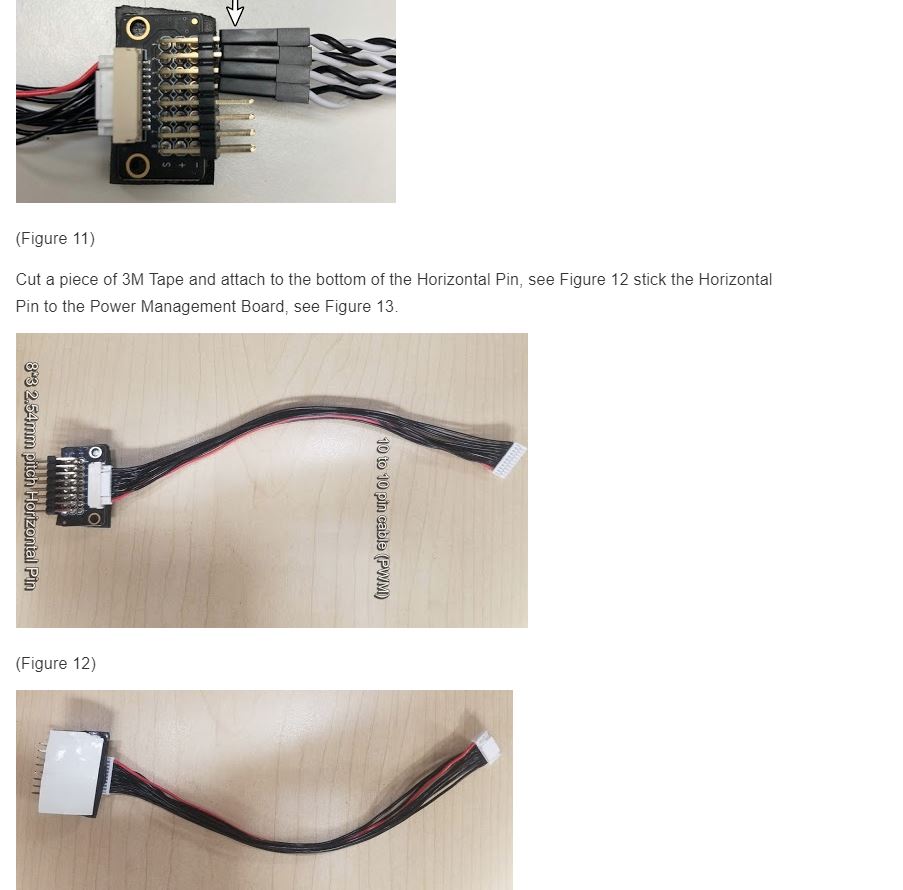 It appears that the bottom picture is the way to go, which then has me asking whether the wires need to be plugged in in a particular order. Does motor 1 go into slot 1? I’m guessing I can get it powered up and find out soon enough.

If anyone has recommendations on the RadioLink vs FRSky scenario with the PixHawk 4 I’m open to suggestions as to whether I should switch and get a FrSky (I just really like the look of the RadioLink version and saw it should be compatible!) But am I making things difficult over style choice?

UPDATE - I see that I only need this PRM-03 to get telemetry sent to the receiver! So I’m only $20 away from that solution. RadioLink PRM-03 OSD Telemetry Module for AT9S AT10 Remote Control Drone Suit PIX APM R9D R9DS R10D R10DII R10DS R12DS

Okay so here’s my update:

Telemetry: The PRM-03 arrived and after connecting it to Telem1 slot I now have telemetry on the RadioLink AT10. So no need for a FrSky receiver, a $20 sensor took care of that.

ESC: I also see that ESC setup using the “Horizontal Pin” is the way to go. I don’t have anything moving yet but all did seem powered up properly.

TX/RX: Next, I moved forward and installed QGroundControl (QGC). However, if the HolyBro Telemetry radios are connected to Telem 2 on the PMB QGC won’t recognize the PixHawk4. But I switched it to Telem 1 and it was recognized when the other radio was connected by USB to the laptop. HOWEVER, then the RadioLink AT10 no longer received telemetry because it was no longer connected to Telem 1. Sounds like the RadioLink is still a problem here…

7/23 Update
So I switched out transmitters and now have the Taranis Q X7S along with the X8R receiver. I am not at the point where I have the motors connected properly and through QGroundControl all my main boxes are green.

I haven’t put on the propellers yet and the only way for me to get the motors spinning is to hit the safety button on the GPS unit, then push the left joystick to the bottom right. Then they start spinning. But they’re spinning too fast to see which way each is going. I tried Motor Test but it shows “Motor test command not supported”. Suggestions here?

I’m now in the realm of sorting out how to prepare my quad for flight through Qgroundcontrol, and I’m fumbling my way through at the moment.