The top toolbar of my QGC is hidden by a the window title bar.
The mouse is not well scaled because I have to click below the buttons to action them.

Someone here has experimented the same problem? Maybe a environnement variable to change? a display property? (Same problem with my QTCreator IDE) 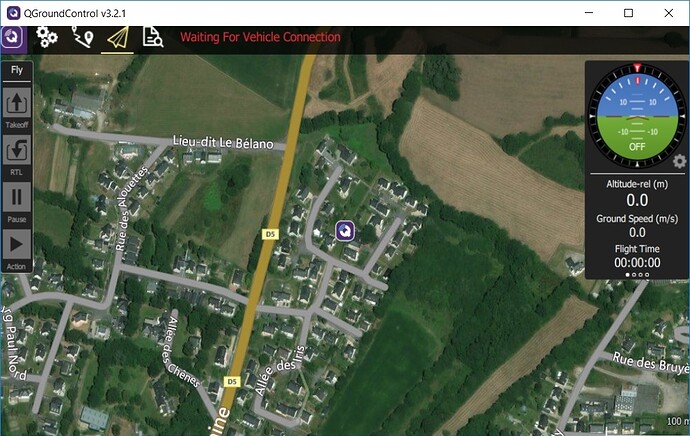 That is really strange. I just tried again on my Windows 10 and it is working fine. The fact that QtCreator has the same problem would suggest some sort of windows setting problem.

Yes probably. And it worked fine before. I don’t know what can cause this in windows settings, maybe a high resolution setting. Thks

I have almost the same problem, I created a bug report https://bugreports.qt.io/browse/QTCREATORBUG-18614 but nobody answered yet…

Yes that’s the same problem. hope someone will answer! It worked very well (no “Windows” titlebar) before for me so I guess I installed recently something that changed the behavior. Do you remember to have installed something before the bug happened?

Running QGroundcontrol in GPU Compatability Mode seems to be a workaround for me. I’m on version 3.2.2 on a Surface book, windows 10, 3200x1800.

Waou! It was so simple… It worked for me, thank you very much Roddart. Appreciate your help. regards.

Hey guys, am having the exact same issues on windows. The top windows program bar sits over the menu bar, and also scales the cursor position accordingly which is pretty annoying.
I’ve had QGC on a beamer, the issues started after that. Might be a causal relationship between the two.

Running in GPU compatibility mode does solve the issue though. Thanks for that.