Quadranger pusher throttle control drops too much after FW transition

I had my first successful (very short) fully auto mission using the QuadRanger VTOL airframe and PX4 1.6.2. Really impressive effort from the PX4 team! And thanks to @sanderux for the great build instructions and helpful advice on the discussion board.

There is one thing I am trying to understand about the transition to FW. If I understand my log properly, in my flight, immediately after the transition, the controller found itself 5m above the target altitude at 15 m/s, set the pitch target to -17.5 degrees, and cut the pusher throttle to 0. This seems like an excessive response, and indeed the plane achieved the target pitch almost immediately and plunged 10m before recovering.

So I wonder, is this is the expected behavior? Is my center of mass is too far forward? Do I misinterpret the logs? Is there some parameter that I can tweak to decrease the aggressiveness of the altitude controller’s setpoints?

You might need to check your elevator when the plane thinks it’s level.
You can also tune FW_PSP_OFF for this. a negative value of something like -0.1 can reduce the amount of climb during transition. You can also try lowering your transition speed. 13m/s should be ok for the quadranger.

However, unfortunately, I also got a repeat of the drop of 10m after the transition.

Log is at http://review.px4.io/plot_app?log=72490c96-96c8-4869-92bc-25c40dc994e8 – if I read it right, after the transition, even though the plane is flying quite level, it decides to cut the pusher throttle to 0 briefly while applying some down elevator. The plane plunges 10m then recovers by turning the pusher throttle back on and applying up elevator.

I guess it’s a combination of a couple configuration problems?

So I will try again with a more accurate level horizon calibration and center of mass adjustment but would appreciate any other advice on whether that 0 throttle is the expected behavior given the sensor inputs.

Sorry for the late reply.

Your FW_ARSP_TRIM is set to 15 m/s and your vehicle seems to have massive problems achieving that speed. It needs to apply almost 100% thurst to get there. This might be the cause for it to loose some altitude.

Try setting that to 13 m/s also. And have a look at the motor/prop/esc/lipo you are using as it seems they are not powerful enough or are using too low a voltage.

What kind of setup are you using?

@sanderux thanks for the reply.

You are right, that motor config was not powerful enough to keep the airspeed at 15 m/s.

I’ve been experimenting with the original Volantex motor and a T-Motor MN4012 480KV. The log you looked at was with the 480 kv, 6s lipo, Hobbywing Skywalker 80a esc, and the 10" prop that came with the plane. As you say it struggles to maintain 15 m/s.

I am still confused about the transition logic, though. Visually, I saw that after reaching 13 m/s, the pusher motor stopped for almost 1s. Without any thrust, the plane glided with a bit of upwards pitch. Then it made a pitch adjustment and restarted the motor, resulting in a drop of about 5 m then some compensation then went on about the mission very well.

I’m fine with that if it’s the expected transition behavior, but wouldn’t it make more sense to keep the throttle up until the desired cruise speed is reached, or maybe first cut the throttle to the FW_THROTTLE_CRUISE level rather than 0?

Just trying to understand what PX4 is doing here. Any other comments about the config welcome. I’m also planning to try the same motor with a modified motor mount and 12" prop.

your vehicle increases altitude during transition. When it comes out of transition it is trying to correct that
Try and set a negative pitch setpoint offset (about -0.05 to -0.1) 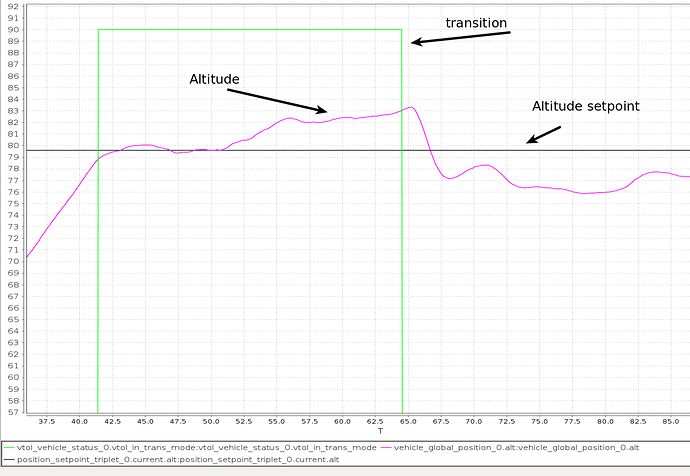 Also,
the stock motor was designed for 4s, you should not run that on 6s
a quad ranger should be capable of cruising well below 10a on it’s original setup on 4s