So, this is my problem: after some inactivity period (when everything worked just fine), I needed my pixhawk for a new task. So I’ve updated QGC to 3.3.0, connected pixhawk, get to airframe selection and seen rover options there.
Decided to update px4 firmware first. Updated, get to airframes tab and boom, no rover there. I thought it may be deactivated for new FW, downloaded source. Checked airframes list and rover (axias and traxxas) is still there. Tried to reflash few times, but with no luck. Reinstalled QGC, no luck. Found this issue - PX4 px4fmu-v2/px4fmu-v3 flashing issues · Issue #5792 · mavlink/qgroundcontrol · GitHub - that with the new FW boards with 2MB flash will not work correctly with px4fmu-v2 FW. Btw, my pixhawk detects as px4fmu-v2 ver 4 board id 9 flash 2mb. So I took old px4fmu-v3 fw, flashed it with QGC and yey! rover appeared. Reflashed it back again wit newest FW ( I thought it will select one based on previous version, but pixhawk still detects as before, and qgc downloads px4fmu-v2 FW). But, despite of “wrong” FW, romer airframe is still there after few reflashes and disconnects.
So, the question - how to make my 2MB pixhawk to appear as px4fmu-v3, not px4fmu-v2? Bootloader reflash?
Now, the rover is gone again… And flashing v3 FW stuck at a near end… 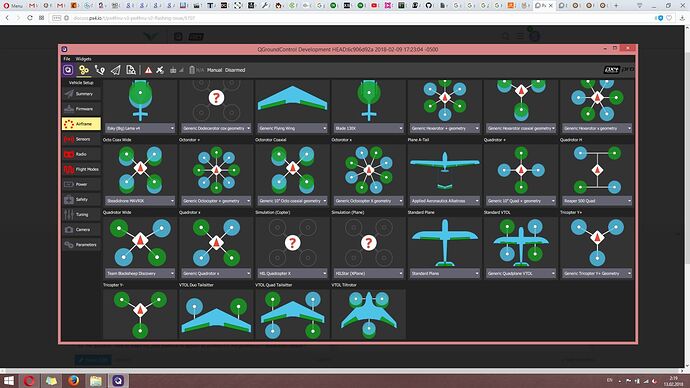 Ok, I think I have some progress:) So I understood that everything except flying airframes is deactivated to same flash size.
First of all, my Pixhawk MC is revision 3, so supports full 2MB flash.
QGC detects 2MB as well. Updated bootloader to rev.5 also. But.now, trying to flash my pixhawk with new px4fmuv3 fw, it stuck at near end because of timeout. This is I dont understand yet. Because I
ve tried before and it flashed.

Problem solved. Used QGC nightly build after updated bootloader. And that build was showing frames incorrectly. Installed 3.3.0 release and now it works as it should with all frames shown.

Can someone, please, tell me why rover is missing from list?