Problem statement:
Multicopter loses its altitude hold suddenly when it is maintaining a height. The copter is in position control mode using PX4FLOW. A teraranger sensor is used as the primary height estimation source. Tested on PX4 1.10.1 and PX4 1.9.2.

Copter took off in POSCTL mode and the throttle was kept the same.

It the logs you can see the height dropping twice. Both times, copter came down on its own and was not triggered by the pilot. 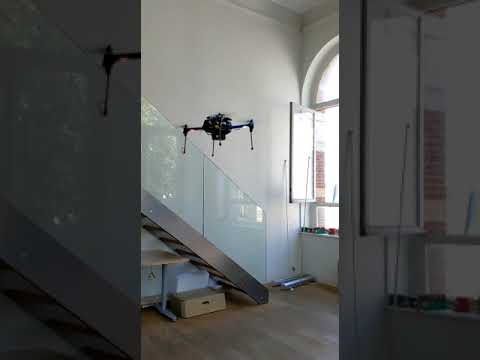 Looking at Actuator Outputs (Main), Output 2 is saturated before impact both times. You can see the impact in Raw Acceleration just below it. It is prioritizing orientation before maintaining height, but without any more authority on that output giving more to the other motors would cause it to bank or yaw.

Output 2 corresponds to Motor 3, in the front left, since they’re zero-indexed here. Output 3 (Motor 4 in the rear right) is also struggling. It seems to be fighting to maintain heading and failing for some reason, either because of a general yaw authority problem or a bias for some reason.

@benasena Thank you for your detailed insight.

Indeed the payload on this copter is heavy and it makes complete sense that Output 2 is saturated before impact both times.

I will change the propeller and maybe even change the motor and give it a try.