So I have a custom airframe that is a flying wing with a rudder on it, meaning I had to modify the mixers and config files using the SD card. Currently when coming into a landing at the flare point then plane always sends the rudder to 1000 pwm which is full deflection and I’m not sure why. Also for some reason the rudder appears to be coupled to pitch instead of Roll when in stabilize mode, but still responds correctly in Mission mode to coordinate turns, and keep the aircraft on a straight line. Any help would be appreciated.

Hi @Kjkinney
I took a quick look at the fixed wind position controller, and it looks like at flare yaw it switches to the wheel controller. There should either be a param to disable this, or perhaps tie it to runway takeoff. I can fix it quickly if you’re available to test.
https://github.com/PX4/Firmware/blob/master/src/modules/fw_pos_control_l1/fw_pos_control_l1_main.cpp#L1622

When are you seeing rudder coupled to pitch? If the vehicle is rolled and there’s a pitch command this is intentional, with the setpoint transformed to body angular rates.

So what your saying is that it’s “outputting” the wheel control loop on the rudder which is causing the rudder to go full deflection when the plane hits flare altitude? And can’t test it now but should be out flying it tomorrow.

And the rudder is responding to pitch inputs rather than roll inputs. In stabilized it responds correctly to yaw.

A bit of a guess based on what changes in the FW controller during flare, but first we should figure out the rudder responding to pitch. Can you share a log? http://logs.uaventure.com/
Reproducing on the bench is fine, just arm first so it’s logged.

First check that the controls respond correctly in manual. What do the other controls do in stabilized? Does the pitch stick move the elevator as well, or only the rudder? Do the roll and yaw sticks work as expected?

Here is the log from a rather lengthy flight today, I went through both stabilized and mission modes, and can confirm that all the surfaces are responding correctly, except the rudder appears to move when pitch is applied to the elevons in stabilized.

Is the rudder just moving slightly? That would be normal since the system is doing a coordinated turn (at least we were doing that when I last checked).

Yeah just very slightly. It’s a negligible amount when in flight so I’m not too worried about it.

@dagar here is the log that would help a bit more, it’s a bench test that goes through manual and stabilize, and should show the rudder being coupled to the pitch command. http://logs.uaventure.com/view/2RPF4UQEshjunfEFWjkHwK

Along with this, I can also test the yaw being switched to the wheel controller at flare if possible.

I was going to say I don’t think it could be from turn coordination because you only have them enabled above 14 m/s, and there’s no yaw rate setpoint logged, but that appears to be a bug. I’ll fix the logging first, then take another look. Really great bench testing data by the way. 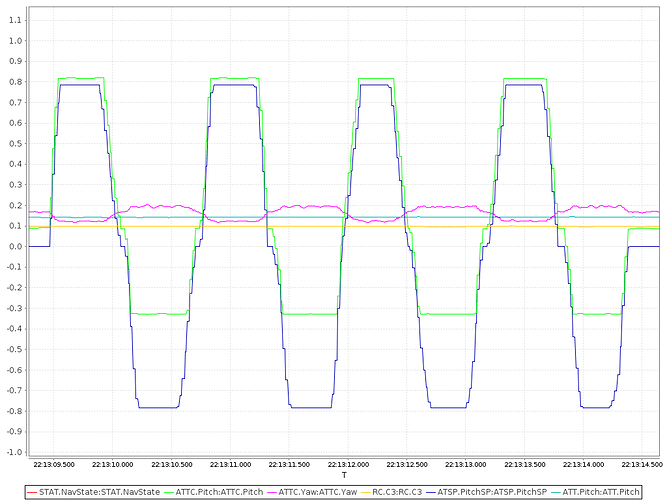 The logging error was just my own flight plot usage, yaw rate setpoint was definitely zero, so it’s not turn coordination.

I missed it at first, but your vehicle was at a very slight roll (~6 degrees). Rate setpoints are transformed to body rates. Roll with a pitch setpoint produces some yaw output. It’s here if you’re curious - https://github.com/PX4/ecl/blob/983c44088faadd2903fe48a6441fde57611cc3cb/attitude_fw/ecl_yaw_controller.cpp#L190

Interesting. It is a very small amount and doesn’t have a huge noticeable affect on flight. I’ll do some more testing. The bigger issue right now anyways is the full rudder deflection on flare, I don’t know how to fix that.

These body frame transformations have a positive impact on flight. It’s just not always obvious what’s happening when you see them on the bench.

Just did a test and I understand what you mean by that now. I tested stabilized mode on the plane with both pitch up and pitch down commands and noticed that the rudder would respond in inverse directions depending on which way I would tilt the body.

While this is quite peculiar. Here’s the landing (attempted) in the middle of this flight - http://logs.uaventure.com/view/XDxR5X5pVEjYNULpojSQdB 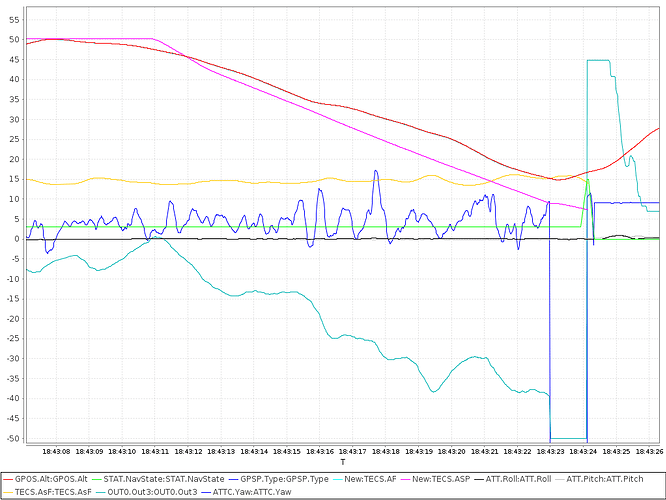 The rudder servo does move at flare, but the servo is also creeping towards that maximum the entire time. Somehow it doesn’t correspond with the yaw actuator command.

Are the outputs aileron, elevator, motor, rudder or rudder then motor?

Yes it is repeatable and it is Aileron Elevator Rudder Throttle.

Ok, that makes more sense. The mixer is throttle, then rudder, but that’s apparently not the OUT* order. 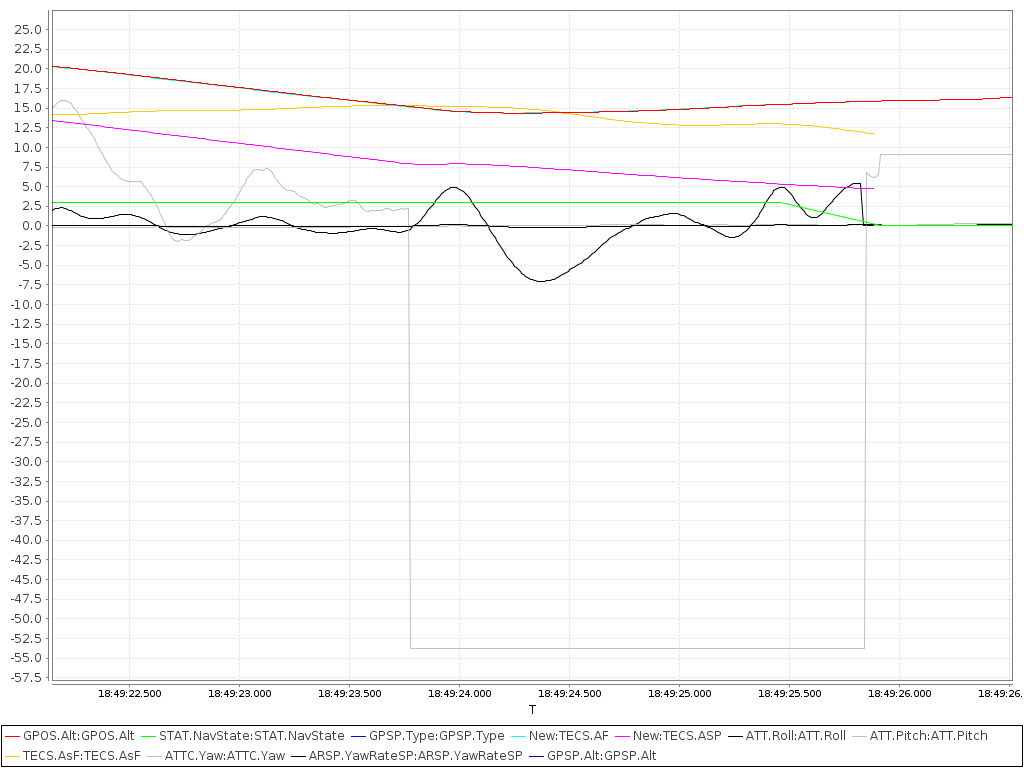 So there’s yaw actuation (gray line) at 10 meters. I think it must be the wheel controller. Standby…

Opened an issue on github to discuss solutions. https://github.com/PX4/Firmware/issues/5970
I’m travelling this week, but we should have a fix soon.