The official doc gave an example of offboard control using position setpoints sent at 10Hz. If I try to speed up the control loop to ~100Hz, I begin to see large delay between setpoint sent from ROS2 and actual vehicle response (~0.5 - 1 second visually noticeable delay). I have tried a couple of things to alleviate this problem and below is a list of attempts/guesses after reading some of the source code. It would be much appreciated if someone familiar with mc_att_control, mc_pos_control, mc_rate_control, and / or RTPS can explain why this is happening.

Any help is appreciated!

Is this the actual communication delay? or the simply the position controller being sluggish and converging slowly to the setpoints? Do you have a log that shows the problem you are describing?

This comment in the official example suggests that setpoint and control model messages be sent in pairs. I tried decoupling the two messages to two asynchronously. It seems like running the control model publisher at 10Hz and setpoint publisher at much higher frequency helps with (eliminates) the delay. Maybe its worth updating the official example to not send the two messages in a synchronous loop?

I think these two should not matter. Have you identified where such a delay is being caused?

From your comments, it does sound like you might have a bandwidth limitation issue. I think it is important to check whether this is the case with maybe comparing the timestamps on the px4 side to see if this is true

Is this the actual communication delay? or the simply the position controller being sluggish and converging slowly to the setpoints? Do you have a log that shows the problem you are describing?

I am using body rate setpoints and I am pretty sure this is not the “convergence delay,” since reducing the setpoint publisher frequency made the control more responsive visually, and the delay was large (~0.5 - 1 second).

Here is a flight log with a 330Hz body rate publisher and 50Hz visual odometry publisher. I have not used any log analyzer before. Do you have any pointers on what would I be looking for in the logs?

@alvinsunyixiao What are the received bodyrate setpoints inside the system? Do you get 330Hz body rate messages inside PX4?

Ah no. Here is a screen shot of the converted CSV file for vehicle_rates_setpoint 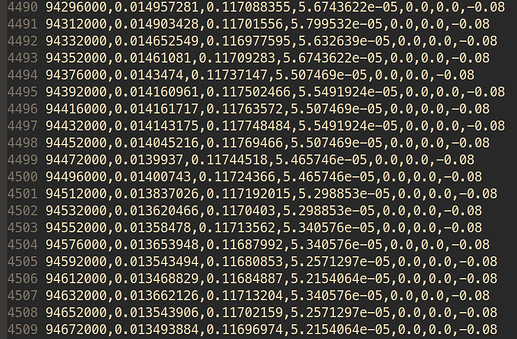 The leftmost column is the timestamp field, and the dt is ~14-24ms, which is much slower than 330Hz. I tried reducing it to 200Hz and the received frequency is pretty much the same.

If this is a bandwidth issue, is there any workaround for this? I recall in ROS1, MavROS is able to handle at least 200Hz body rate control with 100Hz motion capture feed.

@alvinsunyixiao Great! At least we know now what is causing the issue

One small note is that being able to send 200Hz does not necessarily mean that the vehicle is using it at 200Hz. This would largely depend on what kind of hardware you are using. In the end, if you are using regular 3 phase controlled BLDC motors, the motor speed update frequency is once per revolution - which is normally around 100Hz (for a 8 inch prop quadrotor), faster if you are using a high kv motor. Therefore there is really no direct benefit of stuffing data into the pipeline since your actuator update rate is not that fast.

If this is a bandwidth issue, is there any workaround for this? I recall in ROS1, MavROS is able to handle at least 200Hz body rate control with 100Hz motion capture feed.

This is not really related to the performance of mavros. This depends more on the link you are using and the quality of the link. In principle, RTPS protocol should have much larger throughput compared to mavlink. That is the reason I don’t think it is really the protocol itself but something around the setup and configuration of your system.

I have a similar issue:
I try to send attitude commands to my quadcopter in offboard mode through ros2/micrortps.
the system have a big delay and my controller become unstable…

My setup is in SITL ( 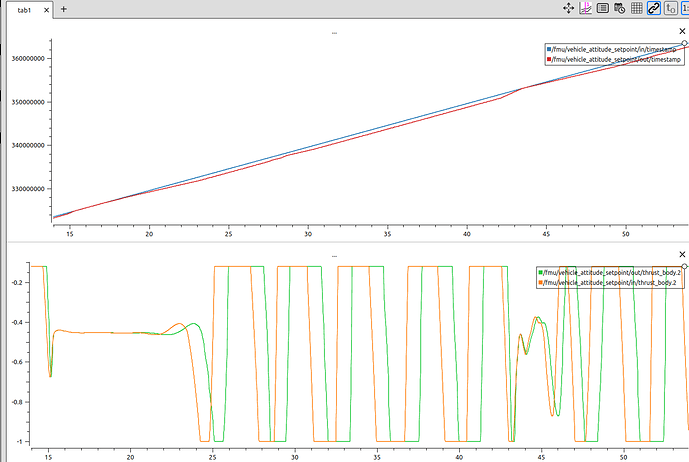 Reducing the publication frequency of offboard_control_mode and vehicle_attitude_setpoint fix the issue.

I am quite afraid of this issue coming back on my real system even with a limited number of publications.

Are there any known limitations that cause these delays ? or any good practice to follow ?
I am considering adding some timeout on attitude setpoint timestamp in px4 to trigger offboard mode failsafe, would it be a good thing?