How to make landing mode softer

after losing the RC connection, my flying wing switched to landing mode. But much too steep. more or less vertically it went down into the ground. which parameters are responsible for this? 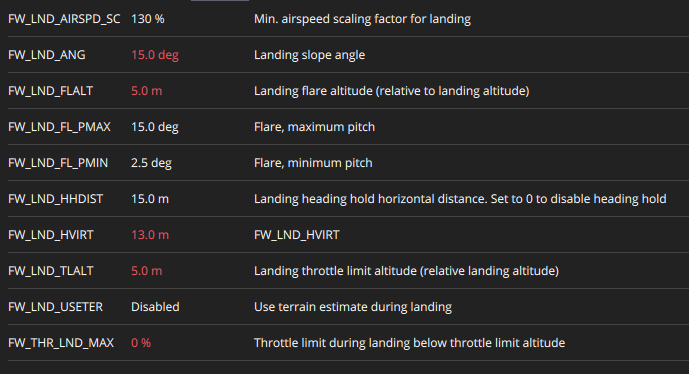 maybe the altitude was wrong detected?

it would be much better if landing mode was a little less aggressive. Sailing to the ground in circles would be great.

At the moment I mainly use the wing wing presets.

15deg is a pretty steep angle, but it should have flared anyways (unless it thought the altitude was higher AGL than it really was).
did it EVER flare? it didn’t flare too high then stall?
it looks like you are set up to chop the throttle to 0(zero) at the flare altitude (5m). i suspect, since your “landing slope angle” is 15deg, your throttle was already at 0 (if your FW_LND_AIRSPD_SC at 130% is an accurate calculation of your airframe minimum speed x 1.3). So, the motor was probably off the whole time? can the surfaces change the wing’s attitude at such a speed with no power?
.
what kind of sensor are you using for altitude?
.
do you have a gps/mag on board? if so, you can set the failsafe to return mode, where the RC xmitter has a better chance of reconnecting. you can also set return mode to perform various patterns, including landing.