I am running the Offboard example with ROS and PX4 in Gazebo as described here: https://dev.px4.io/en/ros/mavros_offboard.html

(There is no Hardware involved in my setup)

I am on Ubuntu 16.04 with the PX4/Firmware on the master branch.

I am making the target for gazebo and px4 with the command:
make px4_sitl_default gazebo
which opens an instance of gazebo with an IRIS drone on which PX4 is running.

And then I run the offboard example node described in the link above. Everything works fine.

The IRIS model is loaded from the folder:
$src_path/Firmware/Tools/sitl_gazebo/models/iris

The world chosen is the iris.world in the folder:
$src_path/Firmware/Tools/sitl_gazebo/worlds

I was trying to understand better the whole architecture and I was wondering in which part of the code the controller parameters of the IRIS are loaded.
For example, where do I find the gains of the PID controller of the IRIS?

Could you point me in the right direction?

I have an update, maybe I found where the parameters are set. It should be in one of the files in the folder
~/src/Firmware/ROMFS/px4fmu_common

I think it should be in one of the files regarding the iris which could be in the folder init.d or init.d-posix

The files could be
/home/schiano/src/Firmware/ROMFS/px4fmu_common/init.d/airframes/10016_3dr_iris
or any of these 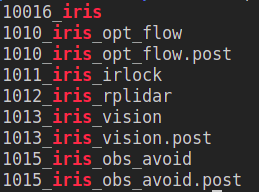 However, I still can’t understand where the link with between Gazebo, the airframes and mixer file is done in the launch files or the files launched by the launch files.