Cheap VTOL drones flyable with a 4G connection can exist?

I’m a new lover on the world of the drones. As a first drone I’ve bought the Parrot Disco (now discontinued). I got it because with some modding it can fly for 4 hours and for a maximum of 100 kms. AFAIK,there are no cheap drones able to do that. Now,the problem is that the Disco is a drone that can’t fly vertically. And it has some disadvantages. For example when it starts flying and when it crashed,if there is an human action,it can’t fly again. So,I’m very curious to know if there is a chance to create the perfect drone. Something like this VTOL drone :

BUT flyable through a 4G connection. I see that TOM uses the radio frequences,but it means that if the drone will fly very far away from him,the connection will be lost. With a mobile connection like the disco,this will not happens. Also,TOM says :

“Obviously it would be ideal to integrate the Arduino code into the flight controller, but that’s beyond my current coding skill level”

I imagine that using Arduino or even better,the RaspBerry Pi zero,it would be possible to make fly the drone with a 4G connection ? For how much time and for how many kms the drone will be able to fly ? I’ve found a guy who until some time ago was building this kind of drones,but now his website :

it is unreachable. Do you know if he changed website,if it can be reached somewhere somewhere else or if you are aware of something / someone similar to that ? thanks.

I’ve found a guy who until some time ago was building this kind of drones,but now his website :

I have no personal experience on this but ran across Skydrone.

are u sure ? Sky Drone FPV 2 is a HD camera system for drones that transmits over the LTE network,instead Tom used a long range radio frequences receiver like this : 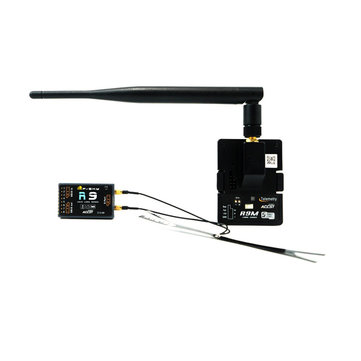 However, this is not usually used for replacing the remote controller but rather used for receiving telemetry. Usually BVLOS(Beyond Visual Line of Sight) flights are done by executing automated missions and receiving telemetry / video over this LTE link, sending high level commands such as waypoints missions .etc. There are a number of reasons you don’t want to directly control your drone over LTE with your sticks, to pick some.

Radio frequencies are used as a robust and easy way of controlling your drone. Even if you try to fly your drone using 4G connections, unless your system has been proven industry grade robust, I suggest you still test it with the RC transmitter in your hand in case something goes wrong.

thanks for your suggestion,but I need that the drone fly for more kms. Why don’t try this ? I’ve bought the parrot disco that with a modding can fly for 100 kms. The creator of the modification says that the latency is good. Its nice. I wanna try. The problem with the parrot disco is that it is not a VTOL,so when it lands on the ground if I’m not there the drone can’t fly again. So I wanna try to create a VTOL drone that can fly with the Sky Drone FPV 2. I’m trying to understand if I can do it.

@Mario_Marietto I am not saying you cannot fly with LTE with PX4. It is totally possible and as I said pretty straight forward to setup. What I am saying is that it is not a substitute of a transmitter. You need more than that, which PX4 already provides.

@Mario_Marietto No, PX4 is the autopilot firmware (software) that runs in the flight controller. Sky drone FPV is a integrated for data and video link system (hardware)

can you make a scheme to help me to understand how all the things (hardware and software) are connected to achieve the goal of having a VTOL drone that can fly with the 4G connection ? I’m very confused.

To setup the companion computer you can do the following:

If you are looking for a plug and play solution, Skydrone FPV might be the choice you want to make. As I said however, using this and sending your drone beyond your visual line sight is NOT SAFE

thanks. let’s go on the hardware part,please. Which kind of hardware u suggest ? can I buy all the hardware pieces in a one only shot ? Or can I buy a cheap VTOL drone already ready,at least for the wings,the hull,the propellers and so on ? the idea is to remove its electronic parts and later changes them with the new hardware components.

All the information you are asking is in the px4 user and developer guide.(including components) please refer to the following links.

Please don’t give me a lot of complicated written tutorial. To start I need video tutorial,on youtube. We aren’t on the '90 years when we should RTFM. Now we are on internet 2.0 times,and we should Watch The Fucking Video (WTFV). The problem now for me is to undersand which hardware components I should use and in which order I should connect them and then I can start studying the software or firmware part.

@Mario_Marietto maybe if you seemed more polite you might get more help. I would be willing to make a video on youtube but I need some kind of guide to help me first. I am researching this topic quite a bit because it seems very interesting and I might stumble across something that will work soon.

I found a guy who built a pretty cheap 4G drone with a Raspberry - what do you think about that one? https://www.pidrone.org

it’s interesting,but I don’t like how it looks. Anyway I think that the tutorial is useful for what I want to do. Basically what I would like to do is to take some hardware components of the pydrone and add it to my parrot disco. To add the propellers to the disco will allows the disco to fly also vertically. Probably I don’t need to add also a frame,because I want to use the frame of the disco. The same for the lipo battery and the lte stick because I have already modified my disco and it has everything to fly with the 4G connection and a most powerful battery. But what I want really to do is to modify the original software of the disco to tell to it to enable the propellers only under some circumstances,to save power from the battery. I’m not able to do what I want,but I would like to find a drone maker to work with him.

Illegal ?! Definitvely not and depend on country …
You could fly BVLOS with authorization from your civil aviation department.

But it is in the U.S. and the FAA doesn’t make it any better.

Ok but it’s a worlwide forum, not only US … So making generality with only one focus country doesn’t make sense !