I am really lost right now.
I have gone ahead with building the Caipiroshka VTOL. I had a successful maiden hover earlier in my backyard with a master build of early April, and although it was only about 20 seconds due to constrained space everything was working fine. I have a short plot of the attitude vs setpoints here (scales offset to fit on one picture, of course) and you can see that it follows it pretty well - mostly fine I’d say (bit sluggish on yaw/pitch but that is due to the elevons I guess): 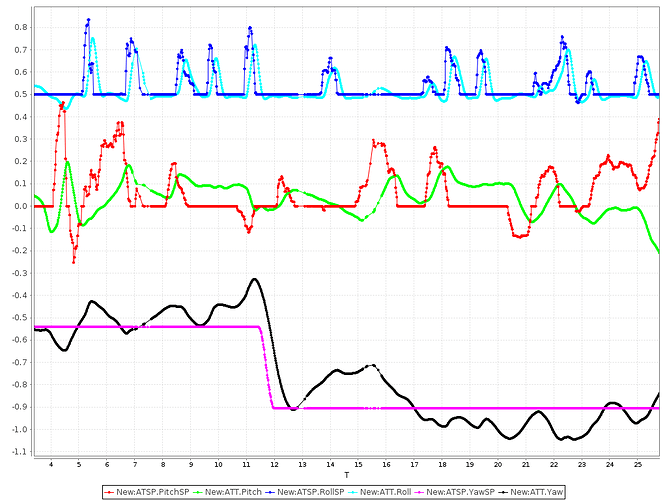 Now, I put it on the master build yesterday evening (I had the same issues with beta and master a few days ago as well). SInce then, I see the following behavior:

When I look at the logs, it seems to me like the actual pitch is “inverted” and acts into the exact opposite direction as the setpoint goes.

Setup (none of these settings changed since the successful maiden hover):

@LorenzMeier advised me to get in touch with you @tumbili whether you can reproduce the same issues on your reference platform with the current master? Any hints on what this could be due to?

Thanks for your help,
Daniel

Hi Daniel
Looking at your older logs I can see that the tracking of the pitch angle is not really satisfying.
I think hovering around in a garden where there is not much wind and when the pitch angle is relatively small will work fine. However, it gets difficult when there is wind from the front.

I think the elevons of the Caipiroshka are way too small. They have been designed to work well in level flight but not for hovering. I would therefore advise you to install larger elevons.
I’ve been working on a bigger tailsitter which is performing really well and I can give you the dimension of the elevon in relation to the body so that you get an idea of how big they should be.

So you can see that the elevon height is about 1/4 of the cord length of the wing.

Once you’ve done that feel free to contact me if there’s more issues. I can give you some advice on the optimal recovery stuff and transitions.

ok, lets split this up in two parts (because my main concern was not what was visible in the earlier log):

Can you please look again into the above? There are other users also looking into the Caipi Tailsitter build, and I think this info would be helpful for the community.

I am also testing with a Tailsitter VTOL now, same scheme as Caipiroshka, using Pixhawk, and have similar problems to solve:

A friend of mine is working on the software, but I think this are PX4 Flight Stack settings - any ideas where to look?

Thanks for any help and advices!
Ivan

p.s. about the elevons size - mines are almost 30% of the chord and seem to work fine - a bit too big for fixed wing flight and a bit too small for hoovering.

I have not been able to test in the lab because I’m sick resting at home.
As soon as I’m back (maybe tomorrow) I can give it a test.
I was thinking to have read that when you hold it in the hand it seems to produce the correct moments.
Also I have seen that in your second attempt you tried it in a field where there could be wind.
It know that it can hover well in a room but it can go unstable from one sec to the other if there is just a bit of wind - that’s just the thing with these tailsitters.

I’ll let you know how my tests went.

Hi Roman,
thanks, get well soon! As soon as time permits I will revert to the old FW to double check in the other direction…
D.

Rolf over at the german fpv-treff forum has reported similar issues that @generator and myself reported. I haven’t been able to test the old master yet (will take several days before I can) but this really seems to confirm that something is really wrong about VTOL in the current master…

@Zimbo
Hi Daniel,
pitching backwards was a pure mechanical problem I had. After a crash repair, the elevons were not in the neutal position when the servos were in their middle position, so the plane was going steadily backwards. This might be also your problem with pitching…
regards,
Ivan

@generator Hi Ivan, thanks for the hint, yes, I will dig in a bit more once I am back home - elevon neutral trim should be OK (as in same as before) but I was using a slightly bigger battery so maybe the COG was just the “critical” bit further off and as @tumbili suggested the tuning probably can be improved as well. Plus the unexpected control behavior that currently is being worked on (#3620 and subsequent) might have led me to the wrong conclusions. Since you both have now reported that it is not a fundamental issue I am positive I will get into the air as well soon

And Nick is sending my I2C splitter, so all pieces are coming together

wanted to finally give some feedback to @tumbili following my earlier posts. Have been quite busy recently but had a several successful tests of a current FW in my backyard with the Caipi VTOL and went for a bit more flying today in the field (unfortunately there was some wind). So: It works again Yeah

To be honest, I am not sure whether at least part of this wasn’t actually on my side (trim of the Elevons as @generator also had seen on his VTOL). Anyways, after adjustments and with the new FW even today with the small gusts of wind I was able to maintain flight also out in the field, in contrast to not being able to take off at all even at no wind - so stabilization and control is back to normal (I also appiled @tumbili’s adjusted PID values that he had been using in his log attached to #4552).

But what you wrote about wind and the Caipi elevons is also quite true: I flew at 90 degrees to the wind direction and was able to keep it in the air quite well even then, but as soon as I (got) turned into the wind the plane was not capable of staying nose up even with massive manual intervention. Well, I already got some Balsa and as soon as time permits I’ll try to build larger elevons (hope the servos will be able to deal with the force).

Have a good weekend and thanks for your help,
Daniel