I am trying to build px4 code on my mac with OSX 10.11.6 installed.
Building by make px4fmu-v2_default on console terminal works just fine and now I want to do the same thing on eclipse.
I think all the necessary plugins are properly installed but no output is created as shown on the capture 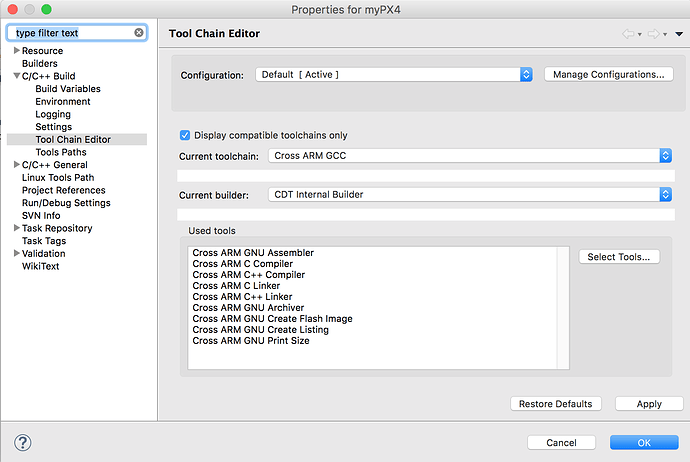 I would like to know what else is needed to make eclipse can build the project and make the output as well.
Thanks,

How did you start it through the console? If you import the existing eclipse project files (eclipse.project, eclipse.cproject) it has some of the more common targets already.

I git cloned px4 stable version and build from terminal.
I brew installed cmake.
Thanks!

Copy or rename the eclipse.project/eclipse.cproject files to just .project/.cproject and then import from the project from within eclipse.

I tried to rename it but returned error.
I simply cannot place ‘dot’ in front of the file.

What should I do next?
Thanks,

I’m not really a mac guy, but try doing it on the command line with cp.
We could make this a helper target in the makefile. Something like make eclipse_project.