I git imported PX4 project into qt5.7.1 on a mac osx 10.11.6.
On the compiler,
gcc-arm-none-eabi-20160928 installed
cmake 3.8.0 is installed
Image below is what I get about the build step for the project.
There is no px4fmu-v2_default option and no other boards too.
Is this intentional and should I make the build option manually?

Build was done anyway as here with just px4 option. 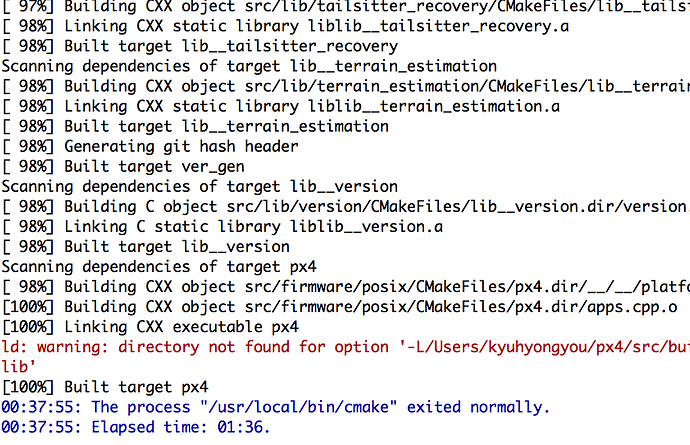 Also in the project panel, I only get following folders which is fewer than the root directory of entire PX4 project. 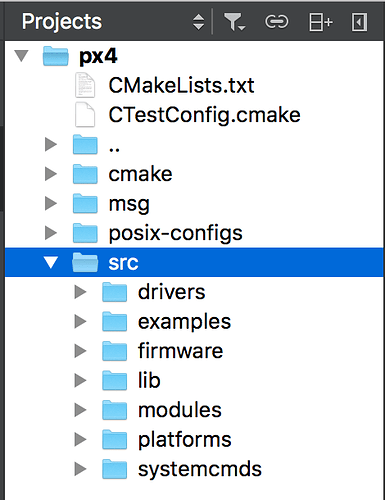 It has to be specified at configure time. Add -DCONFIG=px4fmu-v2_default to the initial cmake run.

Hej @dagar,
thanks for your help here!
Where exactly (which file/step) do I have to add “-DCONFIG=px4fmu-v2_default”?

I solved this problem a little differently as suggested above.
I just imported as Existing Project manually selecting the root folder of the Firmware and add a kit with name “PX4” in the Projects menu.
Below is the settings of the Kits 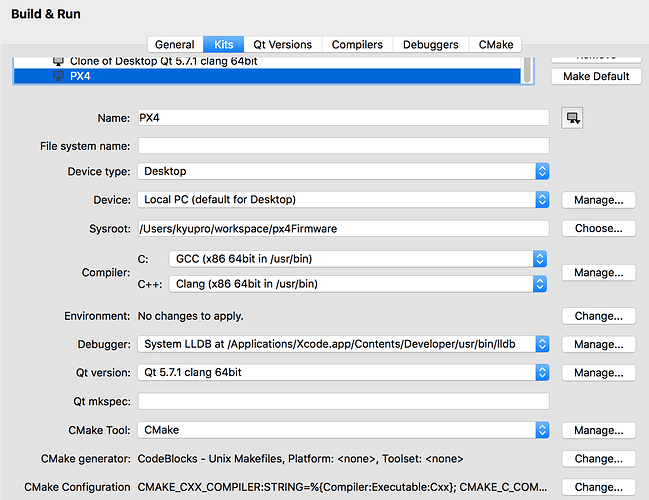 Make sure cmake is installed in /usr/local/bin and add this path.
You can check your cmake location by calling
$ which cmake
Also note that the cmake version has to be no newer than 3.8.x
Latest version maybe like 4.2 or something tho.

And in the Build Step, add px4fmu-v2_default option as shown below

it finally works! =)
However, I had use -DCONFIG=nuttx_px4fmu-v2_default, was the “nuttx_” part just missing or is the config I selected with “nuttx_…” different from the one you proposed?

Ah, my bad. That’s a convenience thing for invoking the makefile, but the actual config needs to match what’s in cmake/configs - https://github.com/PX4/Firmware/tree/master/cmake/configs

Glad to hear you got it working.