Does anyone think it is possible to create an application in which a drone followed a specified set of GPS coordinates at specific times? For example, could I write an application to have the drone be at point x1 at time y1 and then be at point x2 at time y2. I am trying to simulate a satellite flight path so I need to sync up the GPS coordinates with specific times. I have already updated some code to take in a csv file with the GPS coordinates and times. I’m just not real sure how to proceed with integrating time into that.

You could use a Delay Until in a Plan: 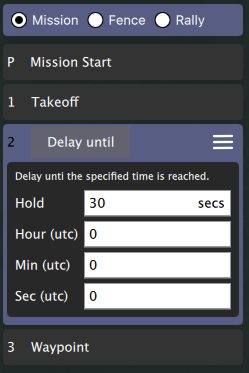 Is this delay until available in the API? I’ve never noticed in anywhere included with missionitems or anywhere else in the API calls. I’m going to be needing to program a lot of these so going through and setting it by hand in QGC is not really workable.

Seems like you might need to write a custom function. I can think of two possible variants of the function. The inputs and outputs of each are listed below.

Variant 2
With variant 2 you would not need to use the “Delay Until” function proposed by @DonLakeFlyer. Instead, the speed of the craft could be dynamically altered to reach each destination GPS coord at the specified time. You would iterate over all of the waypoints calling the variant 2 function for each iteration.

So great idea.
Which directory do I have to write a custom function?