Programming routes and patterns ( Star like, around 1 fix point )

Hope all are doing well during these times, and I’m landed in the right category

As a newbe I want to ask the community if there are tools to generate patterns other than circle or squares. In my particular case I want to generate a star like pattern around 1 central location point.

Effectively creating a star like structure around 1 central coordinate.

Could I have some guidance here if these functions already exist or how to tackle this?

PS.
I found out when having a large® numbers of way points it is not possible to grab the way points not located in the table which is outside of the visible list. Like there is missing a slider on the right hand side to scroll to the parts not visible on screen…

Without some sort of picture to describe what you are looking for I don’t think anyone will be able to ehelp you.

it is not possible to grab the way points not located in the table which is outside of the visible list.

In either the terrain display at the bottom or the waypoint editor list on the right of the screen just click, hold and drag to scroll.

Thanks for your response. I’m sorry it has been a while before being able to follow up.
Basic idea is to have simple geometric figures to use which can be parameterized.
Making figures with WP by hand is painstaking slow and huge problem if you want to be able to create many flexible but accurate flight paths for measuring purposes.

I hope the development team could help out here ??

I added an generic example, but a small toolbox with basic parameterize-able figures could be very helpful for many users in our opinion. Like triangles, squares, circles and the repetition rate/angle of translation angle.

Greetings and have a great day, John 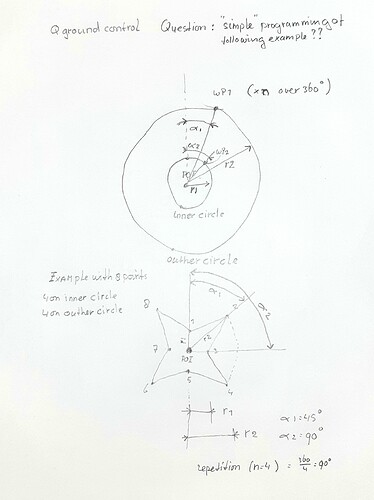 Ah, ok. Interesting but not something that will pop to the top of the list for a while. I wish there was a “development team”, but in reality that’s pretty much just me, which means there isn’t time to do lots of stuff.

I also want to do the same thing as you. The pattern I want is fan-shaped, but it has no clue.