Hey there!
While trying to make a native build on my Pi3B+ for navio2 I get an error like that:
This happens with different versions. I tried 1.9, 1.10 and 1.10.1. This happens after executing: ‘‘make emlid_navio2_native’’. I want to stick with the native build. 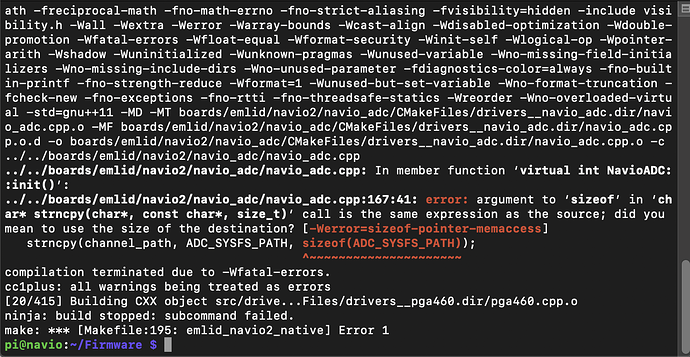 Can you try with master? This looks like a bug but the code is not there in master anymore, so it might have been replaced.

Hey. Thanks for reply.
As I understood it is just a warning not an error actually. But is stops the procedure. Is it possible to turn off the warning check?

I also tried master, but there was a Problem before that. After „cd Firmware“. It said to me that there is no option like „emlid_navio2_native“. I checked list of possible commands, there was only „emlid_navio2“ for cross build.

Yes, because that is the only supported and recommended way at this point, I believe.

As I understood it is just a warning not an error actually.

Correct so you can make it compile without -Werror but it will be a bug later because the strncpy is probably incorrect.

Oh. It means that with Master release possible is only cross build?

Also I don’t get it why there is a bug in a code?

Oh. It means that with Master release possible is only cross build?

Also I don’t get it why there is a bug in a code?

Unfortunately cross build is undesirable solution. Is it any possibility that this bug will be fixed in near future?

The core devs are mostly not focused on RPi+Navio setups. THis means it’s up to you or anyone else using this. Feel free to make a pull request to fix it.

How to make a pull request?

The path of where the px4 binary is has probably changed. Have a look around in the folders to see where it is.

Uff. Thank you very much! Finally I did it by using:
sudo ./build/emlid_navio2_native/bin/px4 -s ./posix-configs/rpi/px4.config

but what confuses me is autostart. I did exactly as said added this line:

But once I turn my Pi off and turn it on it is not in px4 mode. I need again to run:

Is there any option to make it available on boot so I don’t need to make this procedure each time?

Ah nice. I would start it from the system, just google how to start a process at startup. Often it’s done with systemd.

I don’t want to screw this up and accidentally send my Pi to do some infinite loop while booting, so, I would ask. Because this way was suggested in the manual. What this line actually does:

and why is it doing nothing in my case, I mean, maybe I need to slightly change something here, like in previous cases.

I don’t think that’s the risk. If it fails it just won’t run.