I had a crash that seems due to mission mode failure.

I am using a relatively earlier version of PX4 version v1.6.5.

Before the crash, this problem actually popped up once. I was flying a planned mission as in below figure: 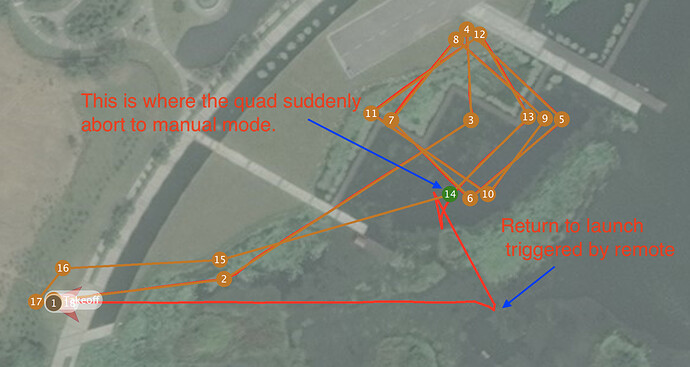 Everything started very smooth, until when almost reached waypoint #14 GCS suddenly alarms
“manual flight mode”. This should not happen as neither GCS or RC are trying to change any states. I can see on GCS screen that the quad starting to drift away from planned path. I tried to maintain altitude and adjust heading for a while and then I decided to trigger RTL to bring it back. The quad landed safely in the end.

However I got no more luck when this problem happened again for 2nd time in the next flight, in still the same location, and almost the same path. The GCS alarmed once again that the quad abort to “manual flight mode”, and this time as my RC throttle is on the minimum position(my bad), it directly fall into the lake.

Unfortunately I did not download the log before the quad crash, so I can not provide anything here for analysis. I just would like to clarify some points:

Such a behavior in latest px4 versions could be possible when you get a “position lost failsafe”. If your vehicle is still able to estimate an altitude, it will switch to “altitude” flight mode and to “stabilize” otherwise.
But it is hard for me to say how it was in 1.6.5.
And it could be only assumptions without any logs.