is it possible to use Gazebo to simulate hover of a Dual Motor Tailsitter VTLO? In this case Gazebo has to simulate the “forces” of the control surfaces in hover as well. Can Gazebo simulate this already?

Thanks and regards,
Mike

I’m not sure if Gazebo can do this, but I’m interested. Have you seen the quad tailsitter gazebo model? 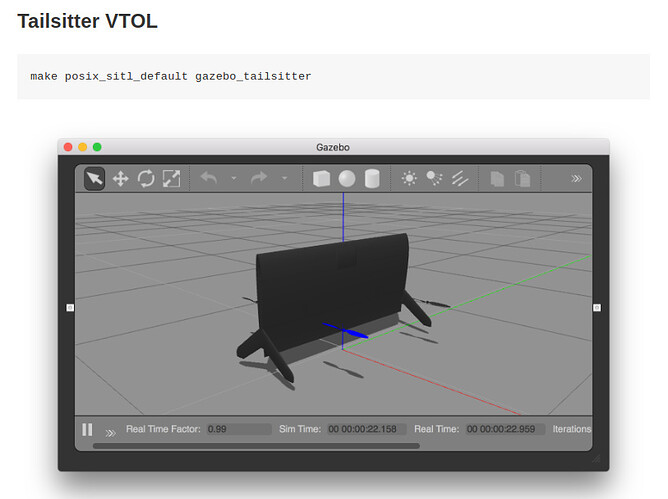 i’m interrested too. I’m just new to this community, my plan is to build and develop Dual motor Tailsitter, like caipirhina but with an optionnal foldable tail for extended range (because flying wing are poor performers)
as gazebo can simulate quads and planes, this should be possible, we have to dig. Any help welcome !

(for now, i can run and control iris drone with gazebo/qgroundcontrol, bor i cant run the tailsitter dagar is mentionning, an error occur and gazebo finally launch empty world…)

@tumbili Would be great if you could chime in there.

@dagar Yes, have seen the quad tailsitter. I think it will not use the force of the control surfaces in hover mode, but I am not 100% sure. I will get a bit deeper into this when I have some time.

@Matthias_Favrel Hi Matthias, we have to figure out if it is as easy as simulating an airplane. There is no “airspeed” in hover mode, the “airspeed” has to come from the propellers, I don’t know how complicated that kind of simulation is in Gazebo.

Yes, I don’t think we will manage this with proper air coming from the propellers, instead it should be possible to apply forces related by equation to the angle of the control surface. We should dig into the airplane model (I haven’t found how it works at the moment), does anyone know how aerodynamic is modelled ?

Here’s some general background on the gazebo LiftDrag plugin. http://gazebosim.org/tutorials?tut=aerodynamics&cat=plugins

Do you guys have any updates on this? I have been trying to extend the PhoenixDrone project to support transtion + fixed-wing flight as well by superimposing the aerodynamic forces from LiftDragPlugin onto the existing model and staring the fixed-wing position and attitude control module. However, I can’t seem to get the vehicle to transition (problematic pitch control causes the vehicle to hit the ground before transitioning to the fixed-wing mode).