Crash after PWM outputs turned off in the air

We recently experienced a crash after our PWM outputs turned off while in the air. (motor to 1000us and servos to 0us)
We have not been able to figure out if this is caused by a bug in the firmware, misconfiguration or hardware error on our side. I would appreciate some input.

The drone was flying in mission mode.
First we had a magnetometer timeout at 36:48, which caused the drone to swap to its internal magnetometer.
The EKF reported “GPS data stopped”, and approximately 20 seconds later GPS fusion started again. During this period, the drone flew fine.

5 minutes later at 41:03, the drone stopped logging GPS measurements, immediately followed by the pusher motor turning off (1000us) and all servo outputs going to zero (0us).
The global position estimate stops 5 seconds after this.
The drone then attempted a QuadChute, but the quad motor outputs remained at 900us and the drone hit the ground at 41:13.

My leading theory for the mag and gps dropout is that there might be a fatigue fracture in our Here2 cable since GPS and mag failed at the same time. The drone has been flown about 60 times since this Here2 was installed, including several dis- and reassemblies.

Regarding the PWM output stopping, I have considered flight termination, but this does not seem likely since the servo PWM values went to 0us instead of 900us which is configured in PWM_MAIN_FAILn.

We have some logging dropouts, so flight review does not include all messages. Here is the output from dmesg: 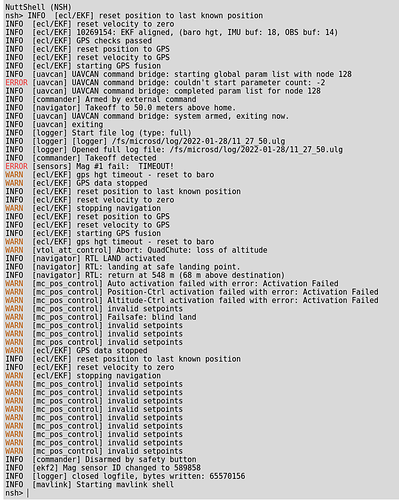 Any input on the PWM output stopping or tips for troubleshooting would be welcome.
Thanks