Reading several posts it appears the VTOL code doesn’t do full stabilization such as on a multicopter.
It also appears you cant tilt the rotor servos backward to move backward, as on the E-flite Convergence or the Bananahobby V22.
If I am wrong please correct me, if not are these features to be added in the near future. 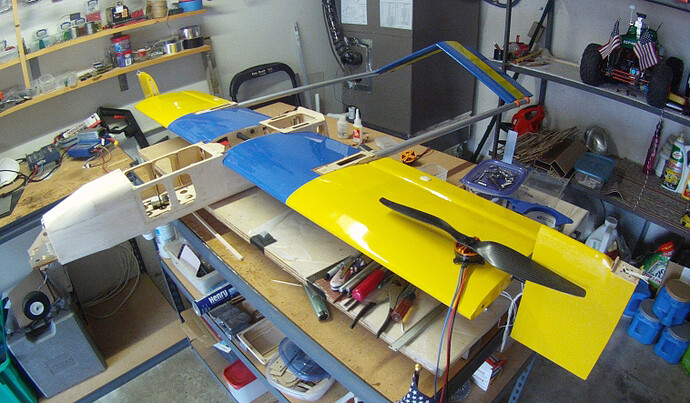 Well did a test fit of my RQ-7 Shadow, went pretty good. However still along way to go.
If I go the E-Flite Convergence way I need to figure out the proper power of rear motor.
If I stay with the Osprey V22 got to figure out how to transfer the rear motors signal to the wing motors and servos.
It has been fun putting this thing together.

Thanks for sharing. Actually tilting the rotors is possible, but we don’t have an existing config. Ping me on slack if you’d like to discuss giving this a try.

Thanks for the offer but I don’t have social media accounts.
I’ll have to wait to use that if its added to download in the future.

I can look at adding a portion of this for the e-flite convergence at some point.

I’ll just wait to see if an Osprey style is added in the future.
Went to slack and we are not on at same times i think.

Really interesting project, want to build something similar for some time, following…

So Osprey-like, only two rotors for hover and forward flight?

Osprey needs a third Rotor in the Tail (e.g. an EDF like Banana Hobby does) or cyclic rotor control with a swashplate for pitch on both nacelles otherwise there would be no pitch control while hovering and transitions …

Ok I see, I got confused by bi-copter designs, where you don’t need a pitch authority but still can fly forward/backwards. (And e.g. this guy can do backflips with it, but I guess it’s some kind of dynamic pitch authority https://youtu.be/t36SHm18Gkc )

The KK2 controller using OpenAero-VTOL can fly like an Osprey, two motors no cyclic.
But, it doesn’t have GPS and you cant program a flight pattern.