Blogpost about the 1.13 release: 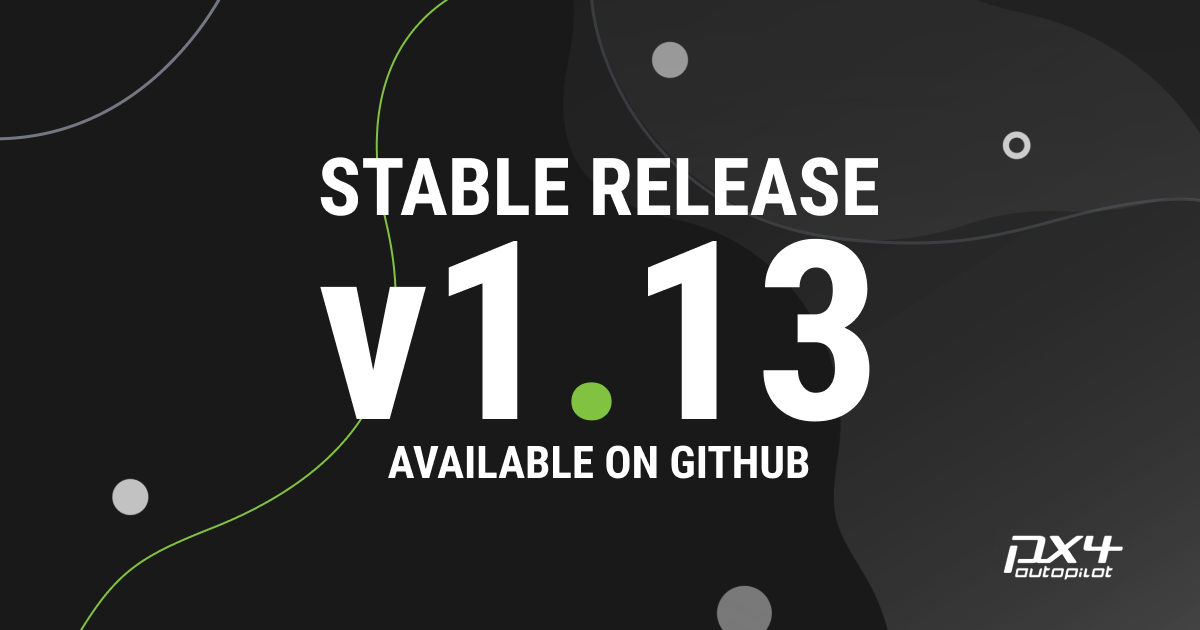 PX4 Autopilot is an open-source flight control system for drones and other uncrewed vehicles. It is currently utilized in industrial drone applications and consumer drones and is the leading research platform for drones. And it is made possible by a...

Guideline for asking a Question

@LudovicVanasse : Question about different launching of gazebo (old and new) between releases.
If you already figured out how it needs to be changed to support the new packages a pull request would be appreciated.
From Ubuntu 20 to Ubuntu 22 the naming of gazebo packages changed. We need to go through some updates and test that it’s as dummy-proof as possible to get going.

@ripdk12 : Frame of the camera needs to be converted from ROS ENU to PX4 NED. The conversion of euler angles to quaternion with the new frame are not working out of the box in the tests. Using stable 1.13.1 on CubeOrange plus (slight modifications). Desired would be to use the main branch and we can directly look at the rotation/frame issues and solve them upstream.

@Benja : To have a version that stays fully compatible with the PX4 releases e.g. 1.13 we should have a release branch on the px4_ros_com repository.

There should be an non-C++ offboard example in px4_ros_com @Jaeyoung-Lim would have one.

ROS 2 bridge documentation update is still pending and it’s not clear how to contribute to it since the pr is growing.

- Intro - Why this approach? - Architectural Overview - A note in the RTPS ha…s been added. This PR is conditional on: - [x] Associated PR https://github.com/PX4/PX4-Autopilot/pull/20227

**Describe problem solved by this pull request** Fixes #9331 and works towards …a solution for part of https://github.com/PX4/Firmware/issues/15874 **Describe your solution** Rescale `manual_control_setpoint.z` which represents the throttle stick value from a range of [0,1] to [-1,1]. **Describe possible alternatives** I think for nicer usage in all the different modules it would be helpful to extend the `Sticks` class to provide the common scaling and gestures (is stick below minimum) from one single place. **Test data / coverage** Not yet tested. **Additional context** This is also useful to be able to convert between RC modes (https://www.rc-airplane-world.com/rc-transmitter-modes.html) on the fly without having to recalibrate everything.

It imports the header file from the wrong folder. Most of the time common needs to be included but it should be possible to opt into the develop dialect.

minimal: bare minimum
standard: basics
common: is everything else
develop: contains experimental messages that should be moved to common once settled

It matters which dialect is included first because it defines the CRC magic number for all the messages.

I have two questions that I think fits into the General Discussions section.

My first question is about launching PX4 and Gazebo with VSCode on Ubuntu 22.04 in the Launch and Debug panel of VSCode. One of my teammates noticed that launching the target SITL (GZ) and SITL (Gazebo Classic Iris) on Ubuntu 22.04 cause Gazebo to fail to launch, but work without issue on Ubuntu 20.04. And we discover the issue to be that the ign command being call in the script px4-rc.simulator (lines 43, 45, 46 and 47). I believe the issue is caused by the Gazebo project changing name and therefore binary name between the Ubuntu 20.04 and 22.04, here’s the link with the announcement: A new era for Gazebo — Open Robotics. And we are wondering what would be the best way to fix this. I assume, maybe creating an issue on the GitHub and moving the discussion over there?

Here’s a screenshot of the issue: 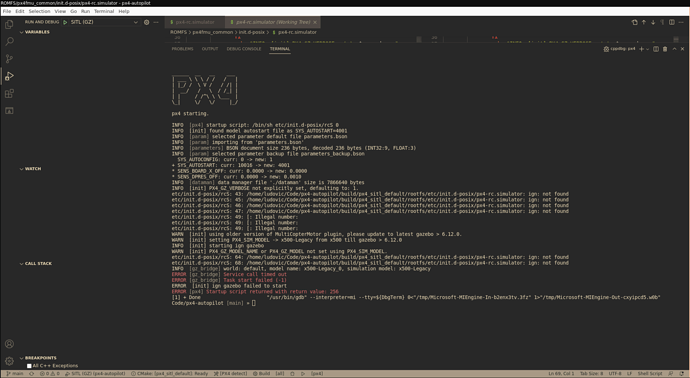 And my second question is what would be the best branch to base our work on? I’m part of a team, building a high altitude platform (think weather balloon but better), and we want to use PX4 as the avionics brain. And we are asking ourselves what would be the best branch to base our work on, either main or a release branch. I’m asking because I’m a bit afraid to encounter issues that might be present in the main branch and that causing us to slow down our development until we find the issue. I also would like to contribute as much as possible to the project, but we are a small company and needs to move fast. I’ve already asked this question to AlexK on Discord, and he recommended using the main branch, but I’d like to understand better the rational and if it really answers our needs.

What do you think about creating two branches in px4_ros_com and px4_msgs only of PX4 version 1.13.x so that who does not use the main branch can still find all the code relative to the micrortps bridge without having to manually revert back to previous commits and manually re-update the messages definitions?

Oh is the main post still not edit-able? I thought I made it into a wiki (but maybe it doesn’t allow edit from everyone

It wasn’t a wiki up until the call started and I made it one, but I think dropping comments in the post is a perfectly good way to add your questions too, do you agree @junwoo0914 ?