How to build Firmware for px4fmu-v2_default using Qt Creator in Linux?

1 Like
[Unsolved] Unable to build firmware under Qt Creator, any idea is appreciated
Basic PX4 building-steps for STM32 with QT
Bart September 16, 2016, 6:25am #2

If you just do a “make px4fmu-v2_default” in the main Firmware folder, it will make a build directory there.

Bart, you are talking about building from command line. But I really want to build in Qt Creator since I am modifying the code in IDE and want to see the build result from there right away.

In that case, just open the CMakeLists.txt in QtCreator

Bart,
That’s what I did. But Qt Creator makes posix build by default. I want to build for px4fmu-v2_default. How can I change target/platform in Qt Creator?

Go to the projects tab and in the cmake settings, change CONFIG to nuttx_px4fmu-v2_default 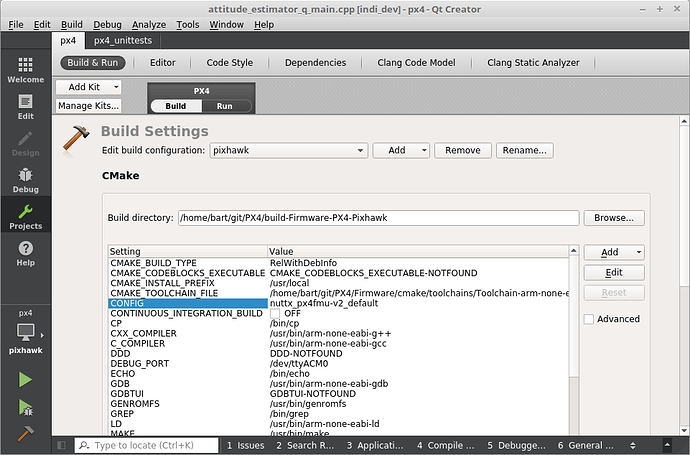 BTW, how to run cmake for nuttx_px4fmu-v2_default? I am not familiar with cmake. Is following command just used to build for posix? What options need to give to cmake for nuttx build? 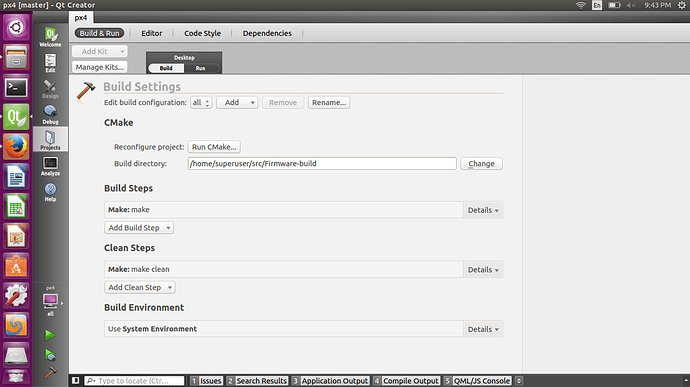 maybe you can try a new version of Qt creator,and you will find CONFIG.

Change the Build directory in QT directly to Firmware/build_px4fmu-v2_default
You also have to change the PATH under Build Environment like it is shown in the tutorial video.

Hi,NJG
I have the same problem as you and i was wondering whether you have solve the problem.

With the instructions in this page https://dev.px4.io/en/setup/building_px4.html#qt-creator-on-linux I can only build the posix target. I tried the other suggestions mentioned above but they didn’t work (I tried Qt Creator 3.5.1 and 4.4.1).

I’m sure this is not the right way to do it, but this is what I did to make it work:
-made the following change to Firmware/Makefile
PX4_CMAKE_GENERATOR := “Unix\ Makefiles” --> PX4_CMAKE_GENERATOR := “CodeBlocks\ -\ Unix\ Makefiles”
-built the target from the command line: make px4fmu-v2_default
-opened Firmware/CMakeLists.txt with Qt Creator 3.5.1
-when asked for the build location, changed it to Firmware/build/px4fmu-v2_default
-clicked Next and then Finish

Hello! I found solution for Pixhawk 2.1. Maybe it can work for you: