Yet another racer in PX4 family - MindRacer

MindRacer is another attempt towards a more modularized UAV system in miniature/nano size range, based on PX4 stack.

Racing is fun and exciting, soldering/unsoldering/cutting and wiring the mess are pain. One of MindRacer’s design purposes is trying to implement a structural hardware, as well as quick assemble/release inter-components interfaces.

For a long time PX4 has been regarded as too ‘heavy’ for a racing system. We try to demonstrate here that a very tidy, modularized racing system architecture can be built upon PX4 platform. It should be regarded as another practice of PX4 hardware implementation for racers and miniature systems, and we hope it is the best so far. We publish the designs here so that these efforts can be seen and discussed in a more wide range. 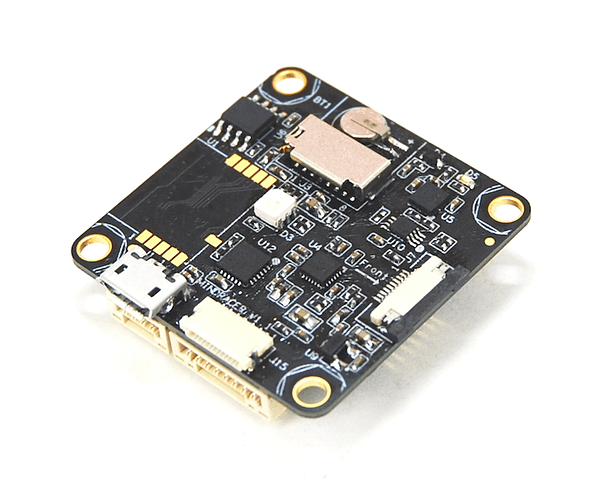 nice board, are you planning mass production? If yes where can we buy it.

Racing seems to be a really interesting application full of paradox, as it has extreme limitations on weight and dimension, but still eagerly desiring for highly modularized components. We have to be very carefully balanced in between.
Before MindRacer we have seen and also tried many different designs on modularity, some of them led to very clumsy results, and some eventually become part of MindRacer. Among them were the WEP interface and SEP interface.

The WEP (Wiring Elimination Port) interface
MindRacer mainboard is defined to be a minimum piece of gear that can barely meet the demands of racing matches, nothing more and nothing less. This formed the MindRacer’s hardware boundary of functions, as shown in Fig.3. Functional ports J6, J8, J9, J10 are exposed on mainboard, as these are what pilots need in any regular matches. All other ports, like I2C, GPS uart, etc., are extended through the WEP interface - dual 1.27mm pitch 2x7 pin headers board to board interface (Fig.2 and Fig.3). 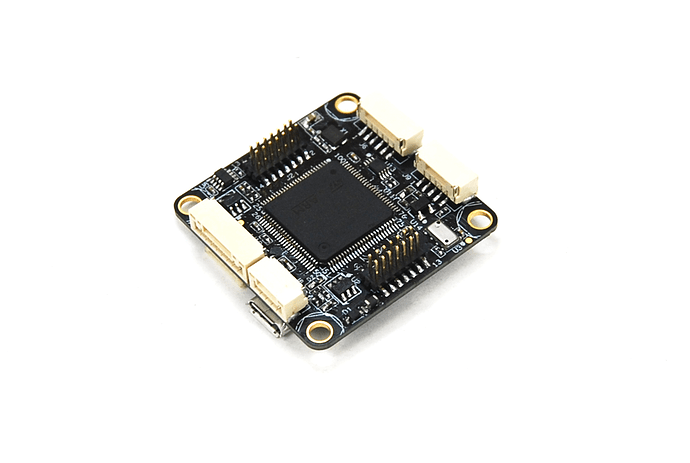 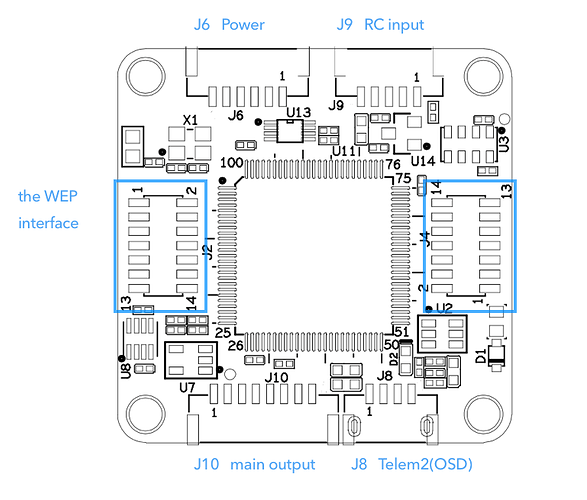 In this way, a racing pilot can throw anything redundant behind during the match.

Pattern of WEP stack - the interface board

The WEP interface results in a very tidy stackable structure for racing drone/small UAV assemble. The pattern of WEP stack defines how the boards are stacked together when in a compact space like racing frame. These may includes radio transceivers, cameras etc.

The pattern is every expansion board have a pair of female headers for receptacle on top side, and a pair of pin headers to led out. 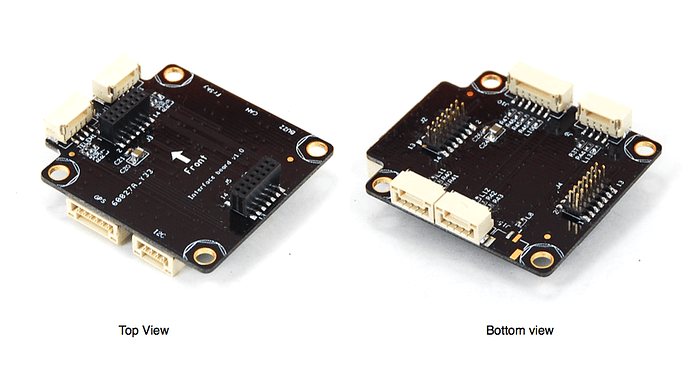 Following the same pattern it can be stacked over the MRPDB and easily mounted together with MindRacer. 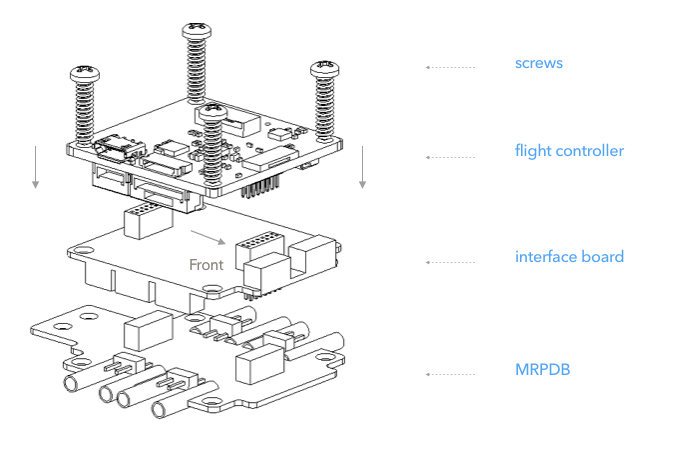 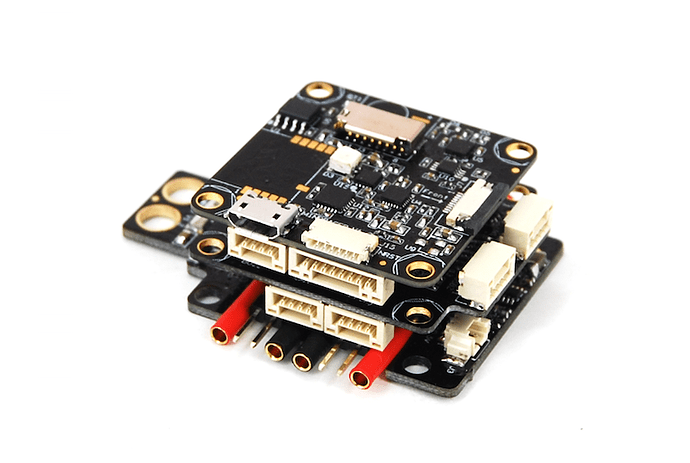 Although you can use any other PDB together with MindRacer, MRPDB is more recommended. The MRPDB (Specification) is re-designed of PX4 PDB under this pattern. The MRPDB is designed to be a soldering-free but plug-n-play PDB. The MindRacer mainboard + MRPDB is a minimum but complete system for a racing drone. 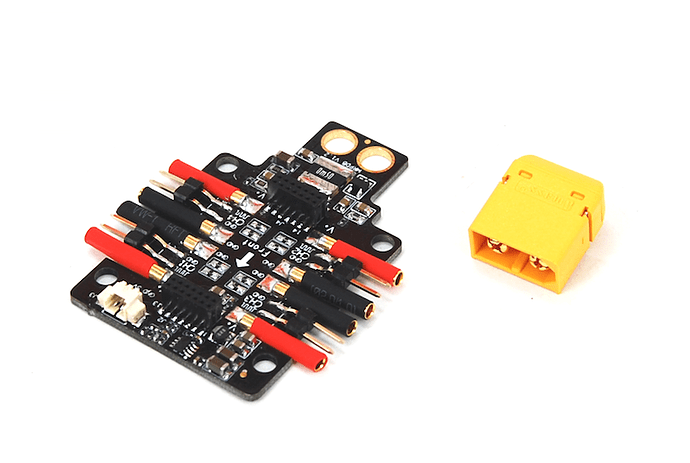 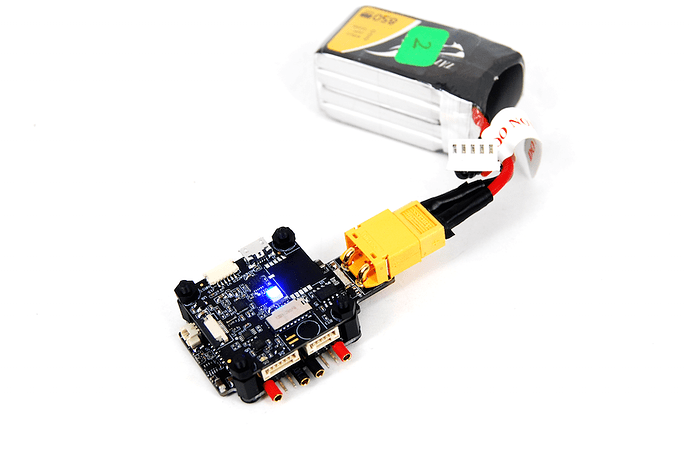 In order to support soldering-free and quick replacement, MRPDB uses 2 bullet female headers for ESC power connection, and 2 2.54mm pin headers as PWM signal input. 2 female bullet headers and 2 2.54mm pin headers together makes one ESC output port (the Soldering Elimination Port - SEP interface). Total 4 SEP are laid on MRPDB. The PWM outputs from the mainboard are routed to its SEP interface through MRPDB’s WEP interface. The ports are numbered according to PX4 motor mapping. 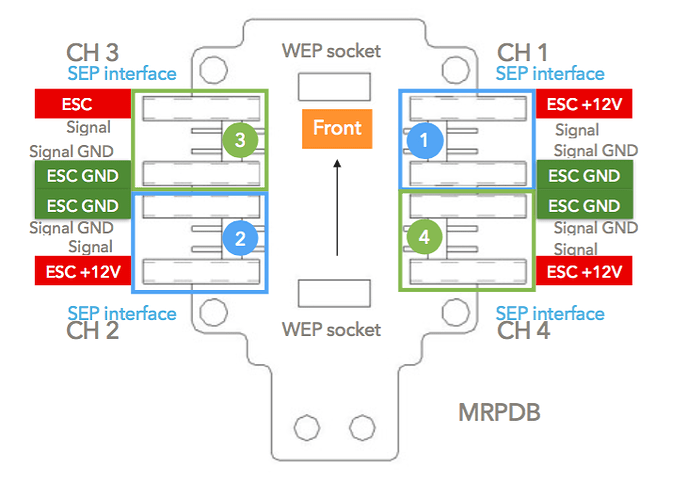 Fig.9 The SEP interface on MRPDB

The mainboard is powered through the WEP directly, including voltage and current sensor input. To convenient assemble and design of extension boards both pin header has power input pins.

As a result, No wiring needed from the main board anymore.

The connection between MRPDB and ESC/motors becomes plug and play. No soldering work is needed when replacing or switching ESCs. This becomes extremely handy and a process of pleasure during a real match in field.

Though tiny, this mini quad can reach a maximum thrust to weight ratio of 8:1 ! 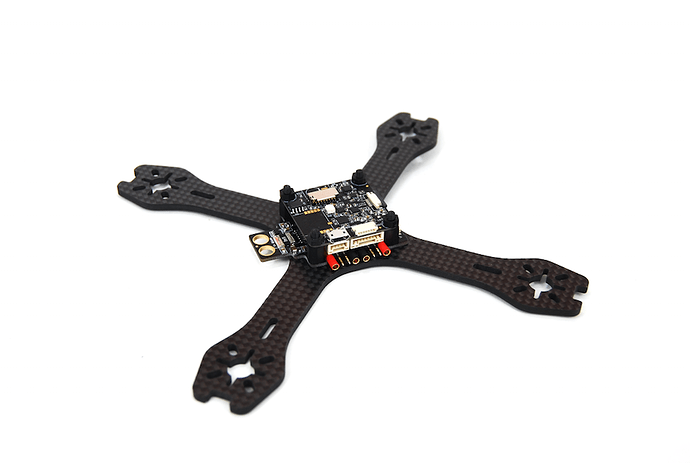 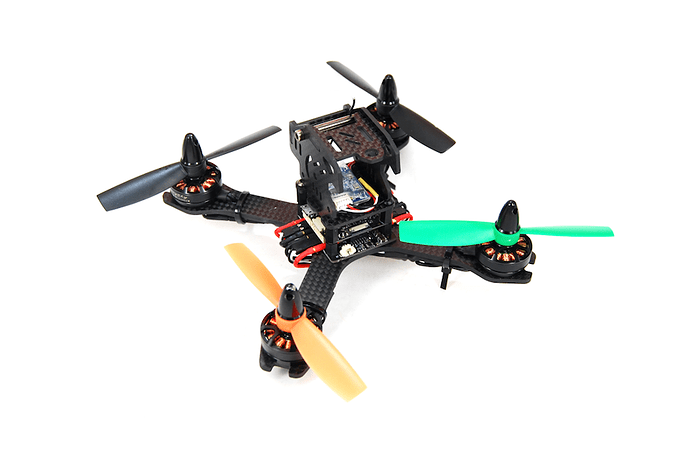 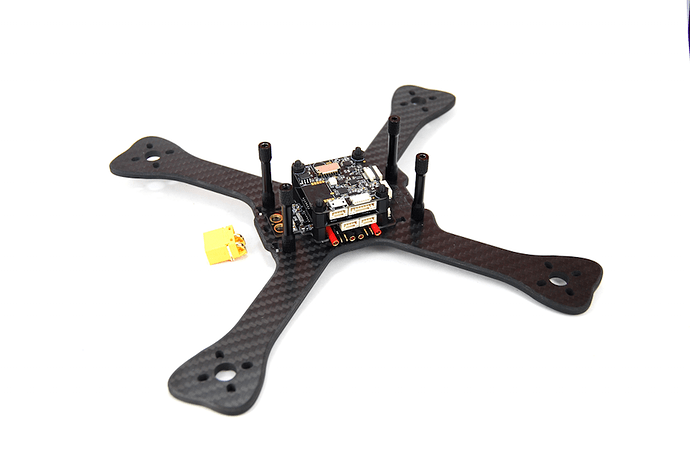 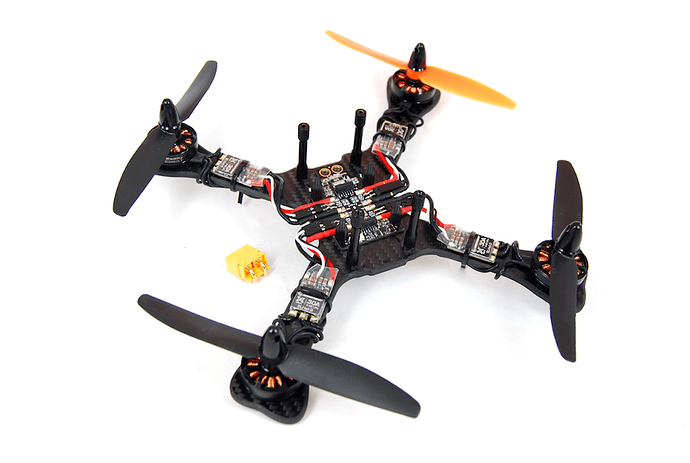 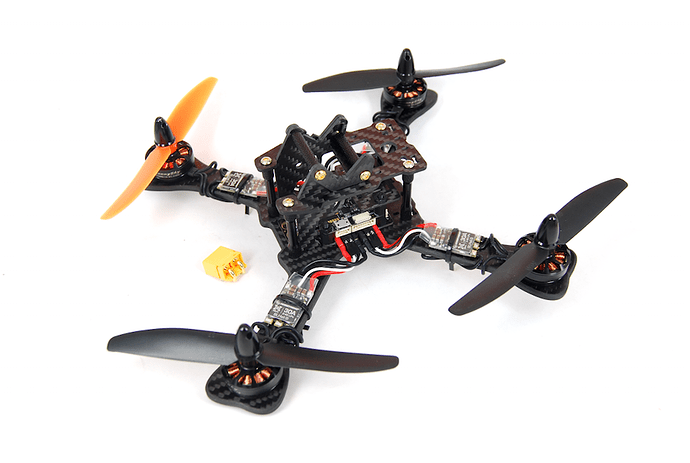 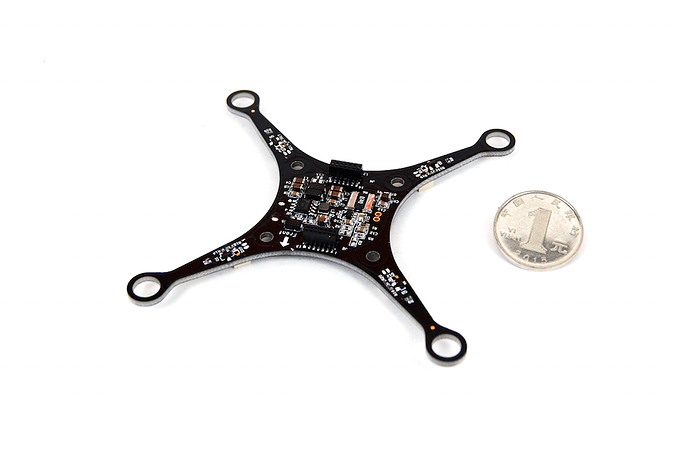 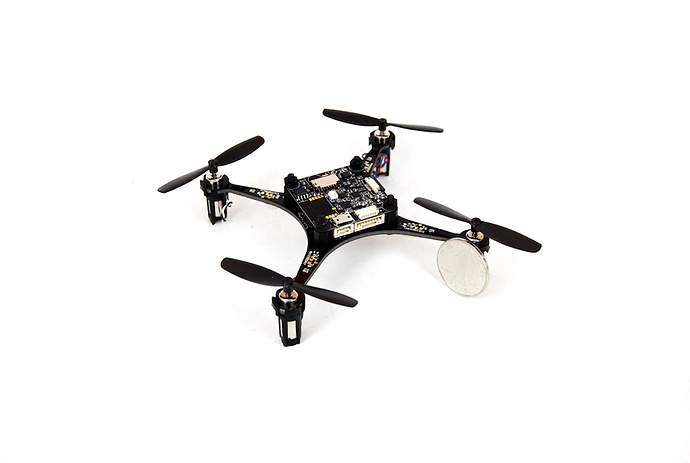 The above building cases have proven this stacking pattern are quite feasible and applicable on small/nano size frames. And more specifically, the WEP interface and the fishbone on PDB works actually quite well during the assemble and test flights. We will be interested to see how this design can be adaptive to different kinds of cases, and you are very welcome to create any board that can stack together with it!

PX4 is already the most powerful flight stack. To be a great racer, there still a lot to be simplified and lot to be enhanced. We hope MindRacer as one of the attempts is just a start and more will follow.
@LorenzMeier @PKocmoud @Mark_Whitehorn

@David_Kraus
Yes, we have manufactured small batch of the board and it is shippable now. You can buy at:

or if you prefer eBay,
eBay

Awesome platform! Do you have the ability to make a few of those available to the development community? (I have 2 or 3 developers in mind who would benefit and can contribute tuning).

I would buy a couple if there’s a RTF option.

How is vibration isolation of the inertial sensors being handled?

@LorenzMeier
thanks.
I will be glad to provide some MindRacer boards for tuning. I just sent you an email. Please let me know the details so i can arrange the shipment asap.

There is a consideration for that. Usually for racing IMU/vibration isolation is not used, however we reserved the IMU isolation interface in mindracer main board in case pilots will need it in other applications.

there is 2 ways to isolate vibration: 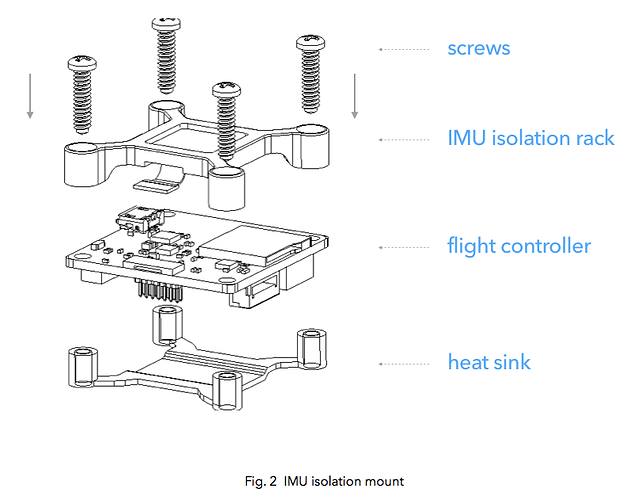 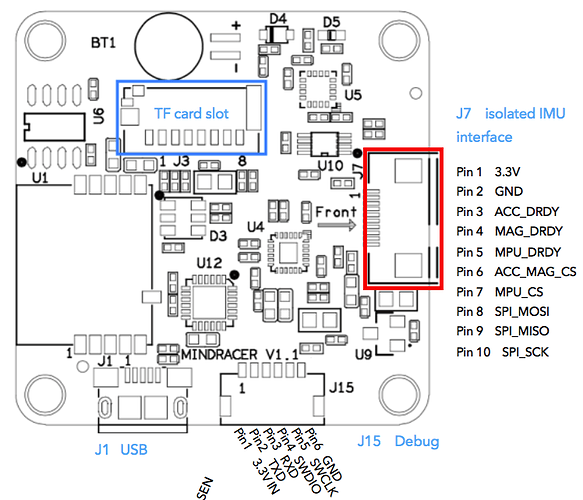 You can get more details about mounting isolated IMU board in MindRacer’s user guide document (link on top).
MindRacer runs PX4 stack so it supports redundant/independent IMU board. This IMU board will also be available soon as a standard component that can be stacked together with MindRacer and other components.
Or, you can also make your own isolated IMU board following this pattern which meets your specific needs.

Thank you. Order received. Will arrange the package heading your way soon.

@rolandash Great Job! I really like the idea of stackable flight controllers! This is must have for racers.

From the photos provided I have several comments/concerns as for fitting the “racer” needs.

I already have a wish list for stackable boards:

@anton-matosov
thank you, i am glad that you like it, let’s just make PX4 stackable

Looks that you are a good racer as your comments are quite professional and get the points.

In the end, I am not expecting to persuade all with above words, as these i think are really personal favors. If one really dislike the connectors. remove them from PDB and solder the cables on pads will just fix everything!

MRPDB is open sourced so ultimately, one can also make their own stackable PDB to adapt to different frame shapes.

But canceled the design to 4 wire version as: 1) in order to increase the friction on vibration 2) 2x2.54mm pin header will be more easier for ESC calibration

I understand you may worry the card maybe smashed away when crash. it’s partly because of the PCB layout density. And, as existing TF slots has no way to prevent that happen during a crash unless add an enclosure for it - which we do not want to do it during racing. use a small pcs of tape instead can do the job.

I share your wish list, and i actually welcome anyone join us to make them together. Except that i am not sure about a 2 or 4 in 1 ESC as 1) i do not want replace all ESCs just because one of them is burn. 2) The heat 4 ESC generated is not good for flight controller. I still believe ESC should stay where the coolest place is.

Thanks for the detailed reply.
I totally agree that good quality connectors are much better then bad quality soldering.
My point was about pro racers, they do not trust connectors at all. The rest is pretty much ok with that.
I like the 3 wire version of the PDB. If you take off the bullet connectors it becomes a good board with solder pads =)
TF card sticks dangerously too far. It will rip off with the slot all together during the crash.

I managed to rip off the FrSky port from pixracer entirely and ESP8266 port partially. So from my personal experience anything that sticks out of the board can and will be teared off

Regarding ESCs heat can definitely be a problem. That might be a reason why TBS made a single ESC per board http://team-blacksheep.com/products/prod:20a6s_esc