Small copter 450 class, moderate wind around 6 m/s with gusts around 7-9 m/s.
Didn’t notice any problems during sensor’s calibration.
LPE showed some good performance after position PIDs tuning, on default values the copter was to twitchy on reacting to position deviations.
Several times I had [lpe] gps fault message followed by high Z deviations between 70-2000(!) meters, and rarely XY uncertainty around 2-6 meters.
Altitude performance wasn’t that pleasant, but it might be due to low z-position tuning and inability to tune it well with the current weather.

Here is the link to all the logs+messages.

I did 4 more flights today and got strange behavior during RTL. During the flight 17_14_00.px4log I enabled RTL first time and everything went fine - it went to home position and start to loiter there, whereas during the second attempt the drone suddenly went 15 meter away (396 second) as long as it reached home position. 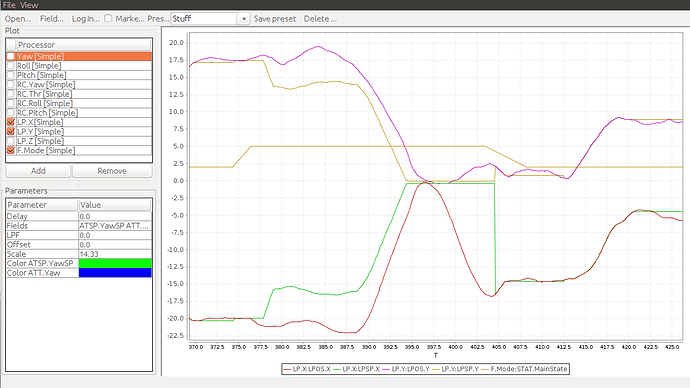 Here is the link to px4logs+messages.

Airframe type: “Standard AERT Plane”, 2101
Switching to ALTCTL mode results in no manual control of ailerons or elevator (impossible to turn).
Also, this page: http://dev.px4.io/concept-flight-modes.html does not describe the stick functions for FW altctl mode.