Hi. I’m looking for some help in finding the root cause of this crash. This is actually the second crash I’ve had on this platform and it’s getting quite expensive.

Factual Narrative:
The Tarot T960 had performed three successful manual flights the morning of the incident. On the fourth flight, the flight of the incident, the aircraft was manually lifted off and then the control mode was switched to autonomous waypoint control mode. Everything appeared nominal and the aircraft was flying well. During the second loop of the mission, the aircraft began to yaw very aggressively to the left. Two of the motors could be seen to slow down considerably as the vehicle began to yaw. Soon after the yaw motion began, the aircraft began to oscillate along the pitch axis. During this time, the person manipulating controls attempted to switch the flight mode from autonomous mode to manual stabilize mode. At this point, the aircraft was already inverted and it impacted the ground from about 20 meters descent.

Additional notes: As far as I can tell, there weren’t any errors reported to the log. The battery was ejected on impact so the very last part of the log (after it was already falling towards the ground) was lost.

I’m going to spend the next couple of days diving deep into the logs and the code, but any help would be greatly appreciated. I’m kind of stumped and I would really like to use PX4 for this project. 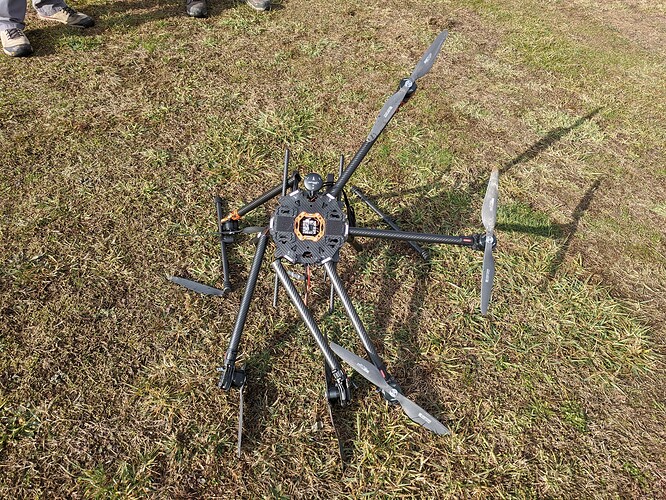 Absolutely! Here is the link to the file in my google drive.

Thanks again for helping. Nothing is standing out to me yet, but I’m going to keep investigating today as I rebuild this thing for the third time. Haha.

After much trial and error, I found that the PWM signal going to the ESC’s was receiving interference and causing random motor desync issues. Moving to Dshot helped mitigate the issue, but it still happens occasionally. I might have to select different motors or mount the ESC’s closer to the autopilot to resolve the issue entirely. Thanks @LorenzMeier for taking your time to look at this issue. I’ve learned a lot about how to identify a desync issue versus a software bug.